For over 36 years, Dick Stewart has been the head pro at Kalamazoo Country Club. In fact, Stewart also serves as the General Manager of the prestigious club founded in 1909. He has won every major award the Michigan PGA Section can bestow including the Golf Professional of the Year (twice), the Bill Strausbaugh Award, and the Horton Smith Award. And if there were an award for the pro-with-the best-sense-of-humor-with-a-hearty-laugh, Stewart would be a perennial recipient. He’s just a solid professional who knows how to provide genuine and steadfast service to his membership. 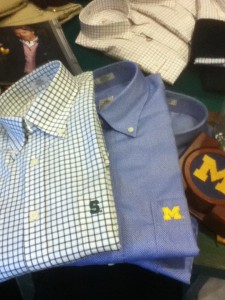 For M and MSU loyalists

Among his many talents, I’ve always admired his skills and eye for golf clothing and merchandizing. Not surprisingly, Stewart received national honors by the PGA of America in 2006 when he was named the PGA Merchandiser of the Year in recognition of his excellence as a merchandiser in the promotion of golf. On a recent visit to his pro shop that could easily pass for an upscale men’s and women’s clothing store, I took special note of how this award-winner effectively displays an eclectic array of items.

Usually when fall arrives, most pro shops are starting to worry about existing inventory and it merely defaults to season-ending sales items. And yes, at KCC there was a rack of such items on display filled with leftover summer shirts and shorts. But the main displays were aimed at the fall-conscious shopper with an inviting assortment of college theme sportswear.  Most importantly, it consisted of upscale clothing lines branded with the M and MSU logos that one wouldn’t normally find even in Ann Arbor and East Lansing. Case in point were sharp Peter Millar long sleeve button down shirts and sweaters. Choices among sweaters included vests as well as the fashionable long sleeves with the quarter-zip. A friend who joined me in the shop also eyed an attractive Peter Millar long sleeve placket cardigan. Also on display were reversible outer wear vests in an assortment of colors. 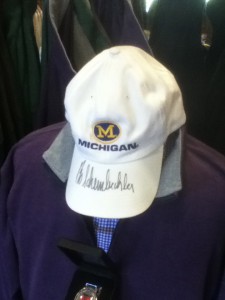 Bo caps it off

I particularly liked how the hats were shown off. One Michigan cap taking center stage was signed by Michigan immortal Bo Schembecher while a trio of Titleist caps sat above a Masters flag signed by 2006 winner Zach Johnson. Cool stuff.

On the walls were a variety of photos and colorful posters of famous golf holes. Behind the counter I spied a keepsake photo of a youthful Mr. Stewart posing with Jack Nicklaus in his prime.

The pro shop at Kalamazoo Country Club is filled with such classy touches and has an aura fit for a country gentleman or gentlewoman. Thankfully for me, it was also open to the public.

If you’re in the area, pay a visit at 1609 Whites Road. For directions, visit www.kalamazoocountryclub.com