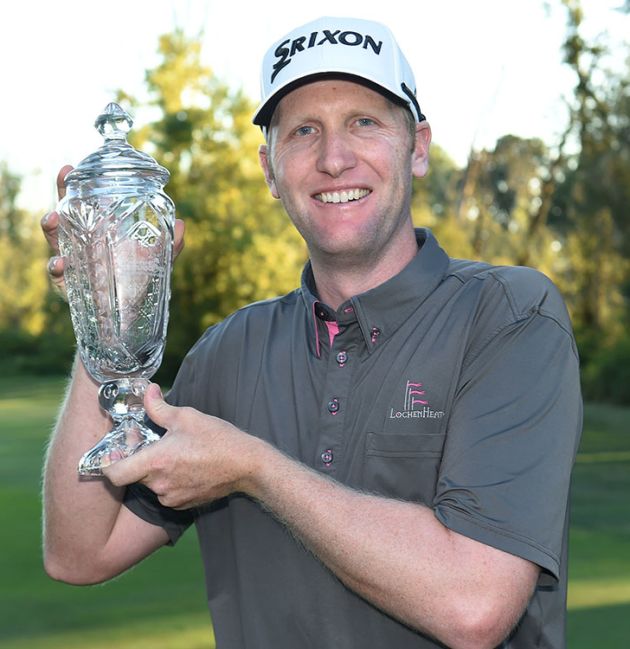 Ryan Brehm is headed to the PGA Tour

Last Sunday Mt. Pleasant (MI) native Ryan Brehm won on the Web.com Tour in Portland, OR, and secured his PGA TOUR card for the upcoming season. A winner at every stage of his remarkable golf career, Brehm was named Michigan High School’s Mr. Golf in 2004 as the state’s premier prep player. The next year he was named the Big Ten’s Freshman of the Year at Michigan State University. While at MSU, he won five college tournaments, was named All-Big Ten, and helped lead the Spartans to conference titles three times. Later serving as an assistant and interim head golf coach, Brehm also holds the career scoring average (73.26) at MSU.

Brehm also excelled in other competitions, including making the cut at the 2005 Buick Open—the first amateur to do so since 1966. In 2007, he won the prestigious Michigan Amateur at Red Run GC. Turning pro, Brehm found success in state championships, winning the Michigan Open three times in 2009, 2010 and 2014. In 2014, he finished solo second at PGA TOUR Canada Qualifying School to earn exempt status on that Tour for 2015 where his best finish was a T-2nd. Later that year, he earned his 2016 Webdotcom Tour card by a T-5 finish at the Tour Qualifying School.

This year Brehm, 30, has played in all 21 of the Web.com tournaments. Before winning last Sunday at the WinCo Foods Portland Open presented by Kraft Heinz, his best finish was T-3 the week before in Knoxville, TN and also in March in Louisiana. In Portland, Brehm went 63-70-68-68—269, 15 under par, to win by one stroke and earn $144,000.

This past week Brehm and I spoke by phone from Traverse City where he lives with his wife Chelsey. Here are edited excerpts of our conversation.

How did you feel last Saturday night knowing you’d be in the final pairing?

I felt fine. I was prepared for Sunday and it was a different expectation for me. I knew I had to go out and play well. Instead of trying to hang on to something, I needed to go out and get it done. I hadn’t always thought that way.

And how did you feel during the round?

Actually, I had a smooth transition in my thinking from the previous night and the final round. Midway through the final round, I knew I had a chance to win so long as I kept hitting my spots and giving myself chances at birdies. I made some big putts on the back nine that weren’t long but were important.

How did you approach your driving strategy on Sunday?

I kept to the same game plan on Sunday off the tee and only changed it on 18 when I knew I had a two-shot lead. Recently, I’ve tried not to look at the leaderboards until the last few holes when it’s important to know where you stand. So that’s what I did on Sunday. I kept my head down and didn’t watch the scoreboards until I approached the final tee box because, given it’s a reachable par-five, there are several ways to play that hole to make a particular score.

Talk us through that last hole.

I hit a three-iron off the tee which left me 315 holes to the flagstick but over a hazard. So I laid up and hit my next shot only 100 yards. For my third shot, I tried to cut a five-iron onto the green but I messed up and found the bunker. I took a safe route out of the bunker and played for a two-putt bogey which gave me a one-shot cushion. It was a great feeling to sink that final putt.

In your post-round interview, you talked about “a calmness” you felt on Sunday. Can you explain it?

My relaxed feeling was a culmination of factors occurring not only this season but probably over the last 20 years. Deep down, I felt was ready to win on the PGA Tour. But I can say there were times I didn’t feel that way. The more I think about what happened in Portland, the more I believe I really didn’t know how to play golf these many years. But that I mean I knew how to hit the golf ball but I really didn’t know how to play the game. Everyone seems to have a different time frame on this sort of awareness and I guess mine took longer than most.

In terms of your game, what was different about this year?

This year was different for me in terms of my decision-making on the course and when to take risks. To a degree my shotmaking has been elevated this year so my course management and shotmaking skills have meshed well all year long. If you keep a steady head and a quiet confidence it’ll lead to better decisions and better shots.

Talk about how competitive it is on Web.com Tour and how low a player must go to win out there.

It hits on what I was saying earlier about really learning how to play the game at this level. The difference for me between this year and last year is amazing. First, the course conditions and set-up out here are not easy. It’s not an average day at your club. The rough is usually tough and the pins are tucked in the corners of the greens. You have to learn how to curve the ball into those tucked pins to have a shot at birdies. In fact, you even have to think how the ball will spin toward the hole.

And what is the mindset to win?

You have to be fearless. It’s the most important quality. A lot of people say a player must play smart. But you have to know when to take a risky shot and then pull it off. That decision is often the key to victory. You just can’t go out there and play defensively and tentatively. Players are too good and talented.

Did your T-3 finish the week before in Knoxville help your playing attitude and confidence?

Absolutely. In Knoxville I asked my caddie on the final fairway where we stood. He told me we were a shot back. So here I was sizing up my second shot on this par-five which is 611 yards and the green is over water. I was faced with a shot of 271 yards to a back right pin. The only scenario where I would go for this pin was being down one on the last hole of a tournament. But I hit a solid shot with my three-wood just on the green. Though I didn’t get it up and down for a birdie, I played that hole and that shot without any fear. That carried over to last weekend in the final round.

Since my win catapulted me into the fourth money spot, my playing status in the upcoming season is much improved as opposed to if I had just cracked the Top 25. I’ll be getting into more tournaments and there’s a good chance I’ll be playing in all of the Fall Series on the PGA Tour. My goal is to keep playing well and maybe get myself in another situation like I had in Portland.

One Response to “Q & A with Ryan Brehm, newest champion on the Web.com Tour”