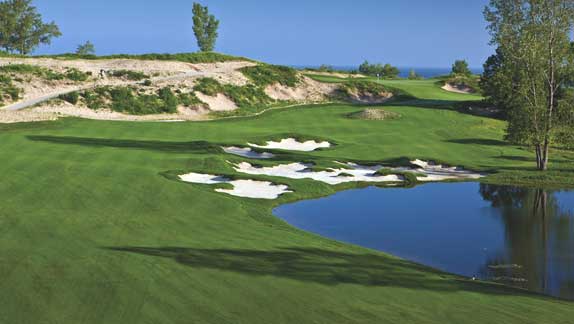 Still a tough test, Harbor Shores has made several improvements on and around the greens

Last week The Golf Club at Harbor Shores in Benton Harbor held a season-opening media event to announce a series of enhancements to the Jack Nicklaus-designed course that’s already hosted two PGA Senior Championships (2012, 2014) and with two more on the docket (2016, 2018).

The changes unveiled largely impacted several of the greens by reducing their slopes and rolls. “Before we did anything, we listened to the PGA, the PGA Tour players and our customers,” said Bob McFeeter, Managing Director, Harbor Shores. “And one of those areas of improvements voiced was the softening of greens.”

McFeeter told me the improvement process, begun last year following the tournament, included a study of the entire course and prioritizing every green. “We focused on the ones with the most impact and the greatest challenge,” said McFeeter. After the evaluation process was complete, McFeeter and his committee assembled detailed drawings and a narrative report and emailed it to the Nicklaus Design office. As McFeeter said: “We certainly got his (Nicklaus) attention…and I know he definitely believes I’m a washing machine salesman.” (laughter.)

McFeeter said Nicklaus understood the concerns about the greens and didn’t oppose the reduction in slope and roll. “To that point, he sent up his golf course architect Chad Goetz and his agronomist Jon Scott and with us came up with a process of amending and enhancing the greens. We put those priorities together and then made the decision to make some improvements.” The work commenced last September and was finished by mid-October.

The project resulted in reducing the roll on greens #1, #2, #12, #14, and #16 while on #6 fairway grass replaced rough around the left side of the green to reduce hanging lies and allow for more club options for recovery shots. The slope reduction on parts of the greens ranged from 2-3 inches to 4-6 inches.

To discuss these changes, event organizers also invited Kerry Haigh, Chief Championships Officer of the PGA of America, widely known and admired for his set-up of golf courses for various PGA tournaments. He began his remarks by characterizing Harbor Shores as “a wonderful and great golf course” and one that “challenges the best players in the world.”

Haigh said the greens at Harbor Shores are an essential element of its championship mettle. “The greens are really what makes this golf course what it is. Anyone who comes to Harbor Shores knows it is a great challenge to play these greens. Some of the greatest courses in the country and in the world have greens that test the best players, so you really don’t want to have smooth, flat greens.” Continued Haigh: “Think about Augusta National. Those greens are extremely severe and contoured just as these are.”

Haigh described the enhancements as offering more pin placements and hole locations while also delivering other benefits. “There’s more hole locations to spread the wear and tear of golfers on the greens which enhances maintenance and playability,” said Haigh. “These are good positive changes not only for the best senior golfers in the world but for general golfers and guests that come here.”

After playing the front nine last week at Harbor Shores, I came away impressed with how expertly and seamlessly the changes were made. If I had never played there before, I would never have guessed that such renovations were completed only the previous fall. And I definitely noticed a reduction in some of the slopes on the greens. More sensible pin placements could be visualized.

At the same time, Harbor Shores remains a challenging and often frustrating test for everyday golfers and putters. Even with the softening, these large putting surfaces will continue to confound many with an unreliable flat stick. Although not mentioned at the press conference, the important role of green speed will continue to be a major factor in playability and pace of play at Harbor Shores. Given the movement in the greens as well as the usual windy conditions along Lake Michigan, everyday green speeds at Harbor Shores should be adjusted accordingly, as they are at famous links courses overseas, for average golfers. Only competitive golfers and professionals can reasonably manage these greens when the stimpmeter measures above 10. But good luck trying to sell that!

It should be noted that the 10th green at Harbor Shores, famous or infamous for its treacherous four-tier design, remains untouched. McFeeter explained the green has ample pin placements and if golfers’ approach shots find the proper tier it’s playable and puttable. Besides, when Nicklaus holed a 100-foot roller-coaster putt during the grand opening, that green became an overnight social media sensation. Sometimes showbiz and entertainment have the last word.

All in all, the smart folks at Harbor Shores are to be commended for making these changes even though in many ways they are, to paraphrase Haigh, more of a “tweaking” than anything. Still, they are telling and reflective of a commitment for constant improvement. That’s been the mantra of the Masters and that’s why Augusta National has witnessed numerous changes to its storied landscape over the years. From what I hear, that’s turned out pretty well.

In addition to the course improvements, other news last week at Harbor Shores included the PGA of America donating $75,000 to the Benton Harbor Promise Foundation. Mirrored in part after the Kalamazoo Promise, which guarantees free college tuition to graduates of Kalamazoo Public Schools, the Benton Harbor program not only ensures community college and technical school scholarships but also offers internships and mentoring opportunities for area at-risk high school students.

Ryan Ogle, the 2016 Senior PGA Championship Director, presented the check to Benton Harbor Promise Chairman Michael Todman who will also serve as a Tournament Chairman next year. In the past four years, the PGA of America has donated more than $400,000 to the local community. About the Senior PGA Championship which will return to Benton Harbor next May, Ogle said: “It’s bigger than just a golf championship…it’s about moving this community forward. I hope when our time here is over, we can look back and say the PGA made a difference.”

Photos courtesy of Harbor Shores and the PGA of America