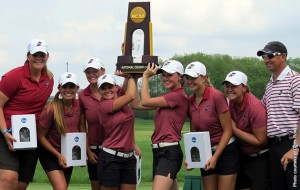 (Allendale, Mich.) Further evidence of climate change was seen last Saturday at the NCAA Division II Women’s Championship at The Meadows GC in Allendale. The University of Indianapolis (IN) became the first school outside of Florida to capture the national golf title beating perennial powerhouse Rollins College (FL) by five shots in the 72-hole medal play competition. It was also the school’s first national sports crown in its history. However, it was not a surprise outcome to its coach, Brent Nicoson.

“This team had this goal since day one,” said Nicoson. “Back when the season started we thought about getting into the final group and with a chance to win the title. This team was relentless about getting better and reaching its goals.”

Leading the field by a single shot over Rollins after day one, the Greyhounds’ strong play on the second gave them a 16-shot advantage over the field. It was a lead they never relinquished in spite of a late charge by Rollins which carded a week low tally of 293 on the final day.

“We held the lead for three days but we knew we could do it,” said senior Chanice Young who paced her squad by tying for fifth place in the individual competition, five shots behind medalist Brenna Moore of Midwestern State University in Wichita Falls, Texas. “Last year, we finished fifth at the finals so this year we wanted to move up the leaderboard. We felt comfortable here at The Meadows. It’s northern golf so it’s home to us.” Joining Young on the winning national team were Brooke Beegle, Annika Hayes, Paxton DeHaven and Molly Ward.

“As a team, we never talked about being the first non-Florida team to win this championship,” said Nicoson. “In our opinion, if you can play golf you can play golf anywhere. We never felt like we couldn’t compete with the best schools.” When asked what he told his team the night before the school’s historic win, Nicoson said: “I told them to keep it solid, to keep it simple and stay confident. And about getting off to a good start and being aggressive.” 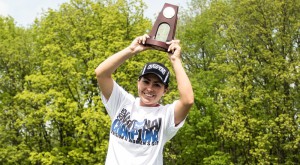 Brenna Moore lifts the trophy as a national champion

Getting off to a good start in the individual competition was Moore, a Midwestern State senior who became the school’s first national champion. She followed up her opening 74 with steady rounds of 73, 74 and 76 to claim the medalist crown by two strokes over Rollins’ Madison Lellyo. “After the first round, I told myself to stay in the moment and if I hit a bad shot to recover and move on.” said Moore, a graduating senior who’s entering nursing school next fall.” For the week, Moore carded only two double bogies over the demanding Meadows layout, designed by Michael Hurdzan on the campus of Grand Valley State University.

Competing as an individual, GVSU’s Kelly Hartigan, a senior and four-time All-GLIAC player, finished tied for ninth with rounds of 79, 80, 74 and 72.

The NCAA golf finals was the ninth held at The Meadows, first opened in 1994. General Manager Terry Sack along with head golf professional Don Underwood have presided at all of them. Commenting on the evolution of those nine championships at The Meadows, Sack said: “The quality of golf has definitely improved and the competition is much tighter. And the NCAA has really lifted this event with more staff, more signage and support for these student-athletes.”

Sack also praised the work of volunteers led by Dave Tanis. “There were over a hundred volunteers this week in a variety of roles,” said Sack. “We thank them but they always thank us in turn for giving them the opportunity to be a part of this championship. That says a lot about Grand Valley.”

Images courtesy of the NCAA