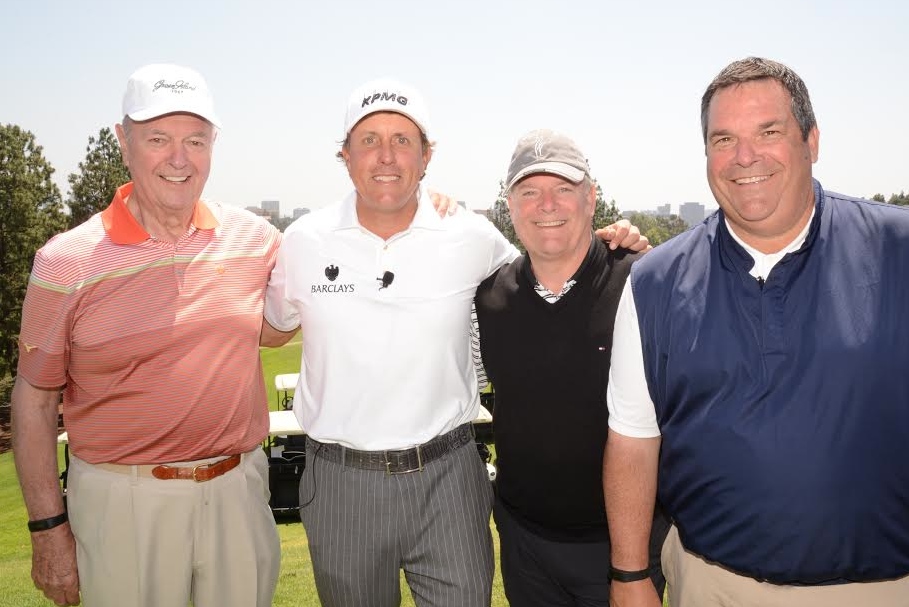 Phil Mickelson with the Lowerys at the FOG

Recently, I played in a fog. I don’t mean facing a low-hanging cloud at the first tee or even trying to overcome a hangover. No, I’m talking about FOG, the celebrated Friends of Golf charity golf tournament held at Bel-Air Country Club in Los Angeles. At the invite of my generous and good-hearted brother-in-law, John Lowery, I played in the 36th Annual FOG in April along with his father, brother and one of John’s long time business colleagues.

We had an absolute blast even though our final team score was relegated to the lower rungs of the leaderboard. So what. We were gladly part of an event that raises funds for scholarships and golf programs for area high schools and colleges. Byron Nelson once described the FOG as “the best one day event on its kind in the U.S.”

Along with playing golf at exclusive Bel-Air CC, a gem designed by George C. Thomas Jr. who also did Rivieria and LA Country Club (North & South), we were also entertained by the honored guest of this year’s event, Phil Mickelson. Mickelson did a clinic, played golf and later spoke at the dinner that evening. Before sharing some snippets from that dinner let me provide a brief background on FOG.

The tournament started in 1979 as a way to help support the neighboring UCLA golf team coached by Eddie Merrins, the esteemed head golf professional at Bel-Air. At the time, Merrins had a total golf team budget of $6000 which included his coaching stipend. A few years later, the tournament’s mission evolved to support not only UCLA but other college, high school and junior golf programs in the southern California area. In 36 years, FOG has raised over $7 million dollars to support aspiring golfers at a grass-roots level. As Bel-Air member and CBS Golf’s Jim Nantz remarked at the podium, “This little event was twenty-five years ahead of other grow-the-game initiatives. It’s pretty amazing.”

“Pretty amazing” was also a good description of the dinner program presented in Bel-Air’s main dining room with its spectacular views of the course and Westwood’s skyscrapers. In a nice touch, tournament organizers arranged to have a junior golfer, Shani—who’s been supported by FOG’s programs—conduct a brief interview of Mickelson prior to his remarks with Nantz. 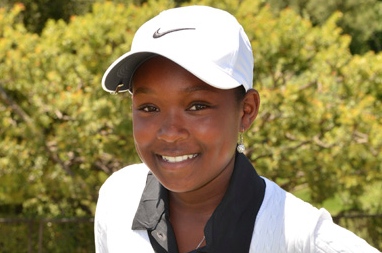 Shani, a junior golfer in LA, was invited to do a Q & A with the honored guest

Here are some excerpts of both of those entertaining and enlightening exchanges.

When asked by Shani about his most memorable junior golf tournament, Mickelson said:

When I was seven years old, my dad told me if I ever won a trophy at a junior tournament he’d buy me a full set of clubs. In those tournaments, trophies were given out for the first three places and then ribbons from fourth to tenth place. At the time, my bag consisted of a three-wood, 7-iron, 9-iron and putter. So I entered this junior event in La Jolla, shot 29 on a par 27 course and ended up finishing second, winning a trophy. I asked him about getting that full set of clubs. But my dad, being a little tight, got me a used set of women’s clubs. (laughter) But those clubs were the still greatest clubs ever.

When asked what’s the best advice he’s received from his teacher Butch Harmon:

You gotta learn how to drive a golf ball, he told me. We’ve been working on that for eight years and we’re still working on it. Butch’s gotten me to view par fours as par-threes. So on the tee at a par-four, he has me thinking where do I want to hit the par-three after my drive, from the fairway or from the rough or trees? Obviously, I’ve been choosing the rough, option B (laughter.)

When asked what advice he’d lend to an aspiring college golfer:

There’s no substitute for speed. You’ve got to swing the club fast. So that means you have to be fit, strong, and you have to swing the club with authority. Don’t let the club swing you. With speed, you’ll be able to create spin on the golf ball, hit it higher, softer, and control it better…You can’t dominate in the game without speed…So strength and speed first; work on control later. At 44, I’m still working on control (laughter.)

Jim Nantz, a prior FOG honoree, came up next and shared some thoughts and memories from anchoring 30 Masters (and counting) which he described as “the deepest and most important of my life.” Along with Jack Nicklaus’ victory in 1986 and former University of Houston roommate and friend Fred Couples’ win in 1992, Nantz said Mickelson’s breakthrough Masters win in 2004 was an extra special thrill. Describing Mickelson’s final winning birdie as it rolled toward the 72nd hole, Nantz recalled: “Is it his time? With inner joy, I added, ‘Yes, at long last!’ Nantz called Mickelson, a close personal friend, “one of the iconic golfers of all time—he’s on golf’s Mount Rushmore.”

Seated on two stools, Nantz and Mickelson commenced to have a lively, insightful and often hilarious conversation about Phil’s career and game. Here are some excerpts:

Mickelson sharing some early memories about getting started in the game:

At eight years of age, I went down to my local muni, Navajo Canyon GC in San Diego (now called Missions Trail) and asked to work there to have playing privileges. Rick Thompson, the local pro, told me, “Well, we normally don’t give jobs to 8-year-olds.” But Rick went out on a limb and allowed me to show up and be responsible. I picked up trash, drove the cart to pick up pins at night, picked the range—all so that I could play there for free and practice. When I was 12, that course was bought by American Golf Corp. and they fired everyone under 16. But I went to another course, Stardust, and they gave me an opportunity to work and play golf and practice.

It all goes back to Rick Thompson, giving me a chance, keeping an eye on me, setting up games with other players and allowing me to do what I love…It ultimately led to a hall of fame career. It’s those people that see the potential in kids like we saw at the clinic today. No one wants a handout, no one wants something for free; but rather these kids are looking for the opportunity to succeed.  FOG is about giving opportunities to kids who otherwise wouldn’t have them…That’s why this is such a special event here at Bel-Air…I’m an indirect beneficiary of programs like FOG.

When asked about golf’s direction and current state of affairs:

It’s headed in a very good direction and golf has a more welcoming environment nowadays. People say golf is in trouble because it’s too slow. But I say it’s not about speeding up play. Golf is not for everybody. If you love the inner challenge of testing yourself against a course. If you love going to course with buddies, the social aspect, if you love the head to head competition—with a handicap system or straight up—golf can fulfill all those desires. I want to go to the course and spend all day there, playing with friends and practicing…We need courses where juniors and young golfers can do the same—with par-3 courses as well as practice facilities and a video game room in the clubhouse…All these things will make juniors want to spend time at the course. At the six courses we own in Arizona, our play is up 180% in a year. We simply created an environment where you want to spend more time at a golf course, not less.

Commenting on the 2015 Masters:

It was so close for me. Before that week, I’d been throwing away shots and I finally put it together at the Masters. The 270 (final score) by Jordan (Spieth) didn’t surprise me. The course was set up so differently than in previous years: the greens were softer than any tournament we played on Tour and were slower than they’d ever been. Because of that the scores are set-up to be extremely low. Over the last five years at Augusta, that’s been the trend. You can get away with a lot more mistakes now. Angles aren’t as important when you can fly the ball to the hole and stop it. Angles are critical when the greens are firm and you can’t stop the ball and you have to play for 60 feet of run…With the greens soft and wet, you can get away with a lot of mistakes.

Commenting on Rory McIlroy’ s and Jordan Spieth’s ascendance in the game:

They’re both tremendous players but neither of them have approached what I saw in Tiger in 2000. That year I saw a level of play I never thought I’d see in the game of golf. I saw a ball-striking performance, a driving distance performance, accuracy, iron and distance control, and ball flight control. And his short game, chipping and putting, were at a high level. Tiger could win tournaments even if he struck it bad due to his short game; and he could win tournaments even if he putted it bad because of his incredible ball-striking. He put them together and won the U.S. Open by 15 shots. I knew then that something needed to happen for me to be able to compete…And something did happen: Tiger left Butch Harmon. (laughter)

Photos courtesy of Paul Lester Photography and the FOG.