Befitting Halloween, it was a scary final round for Michigan native Justin Hicks at the Nationwide Tour Championship last Sunday. But Hicks, the 36-year-old former University of Michigan golfer, held on to end up in the 25th spot on the season’s money list and thus landed an automatic “promotion” to the PGA Tour in 2011. In spite of shooting a final round 76 which included a harrowing stretch of  five bogies on his back nine, Hicks secured his first ever card by finishing in a T-26th place, worth $7400. For the year, Hicks earned $209,259 which ended up within the all-important Top 25 exempt list by only $2010. Back in May, he won the Nationwide’s BMW Charity Pro-Am where he cashed his biggest check of the year for $108,000. But he needed a decent showing last Sunday to secure his card.

“That last round was tough,” said Hicks. “It was windy and in spite of hitting a lot of good shots some holes just got away. I wasn’t really feeling the pressure on the last nine as much as some shots and putts just didn’t go my way. It just happens.”

Born in Wyandotte, Hicks cited hard work, patience and the support of family and friends as keys to earning his card. “I’m very fortunate to have a wife who enjoys what I do and understands the life of a Tour pro,” said Hicks. “I also want to thank my teachers Tom Tontapanish and Matt Messer and also my friend and business agent Brad Paskievitch. I couldn’t have done it without them.” 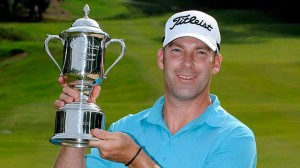 Earning a coveted Tour card was especially sweet after Hicks endured a disappointing 2009 when he finished the year without a victory and earning $121,965–52nd spot on the money list. In 2008, he won his first Nationwide title, the Wayne Gretzky Classic in Ontario and then two weeks later he grabbed national headlines for being a first-round co-leader at the U.S Open at Torrey Pines. However, he ended the year outside of the top 25 and also failed to secure his card via Qualifying (Q) School.

“I learned from all of those experiences and evaluated every aspect of my game,” said Hicks. “Thirteen months ago I switched to a cross-handed putting grip and it helped to stabilize my putting particularly under pressure situations. I also worked on my bunker game. I’ve learned you must have the goal of being strong in every aspect of your game. Out here, you can’t have any weaknesses. You might be average in a few areas but you can’t have any weaknesses.”

Even though he secured his card, Hicks will still play in the last stage of Q School in early December. “If I finish 25th or better in the final stage, it improves my standing for getting into more events next year. In any case, I expect to get into roughly 20 PGA Tour events next year.” And Hicks is fully exempt for any Nationwide event he opts to enter.

Speaking of Q School—the game’s ultimate pressure cooker—Michigan players’ fortunes so far have been a mixed bag. Most notable is Grand Rapids native Matt Harmon, the All-Big Ten grad from M.S.U, who won medalist honors at his first stage in Lakeland, Fla., with an impressive 20-under par fashion and advanced to the second stage in two weeks. Harmon won twice this past summer on the Hooters Tour. Also advancing to the second stage from the same venue was Traverse City’s Randy Hutchinson, another Spartan, who finished in the Top 23 to also qualify.

Grand Rapids native and 2010 Michigan PGA Tournament of Champions winner Andy Matthews decided to forego Q School this fall, opting instead to live in Ann Arbor in order to train with the strength and conditioning staff at U-M, his alma mater. Matthews, who won a Canadian PGA event in Mexico this year, emailed me recently: “I’ll head south in January and play a similar schedule to what I did this year, with Monday qualifying for PGA Tour events early and Canadian Tour in the summer with the Michigan Majors mixed in.”

Michigan’s only other player on the PGA Tour is Jackson’s Brian Stuard who needs a stellar, cash-rich finish next week at Disney, the final official tournament, to retain his Tour card. Stuard is ranked 151st on the money list and is nearly $200,000 outside of the Top 125 mark. He’ll need a top 3 finish to avoid returning to Q School.

Incidentally, here are the entry fees for the qualifying stages: $4500 first-stage; $4000 second-stage; and $3500 for the finals. Maalox tablets are extra.