Kudos to Marshall’s John Morse, a Michigan Hall of Fame member, who earned a fully exempt card for the Champions Tour next year. In the final stage of qualifying at TPC Eagle Trace in Coral Springs, Fla., Morse compiled rounds of 67-72-66-71 and then birdied the first hole of a three-man sudden death playoff to nail down the fifth and final qualifying spot. Playing in the last group of the day, Morse missed a four-foot putt for par on the 72nd green which would have clinched his card.

“It was strange during the final round,” said Morse in a recent phone interview. “There were no scoreboards out there I had no idea how anyone stood to the field. So I just went out and played my best. Even on my last putt on 18 I knew the putt was important but I didn’t know it was for the final spot.” 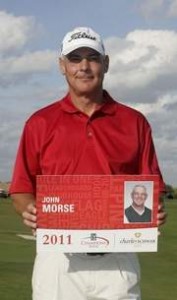 As it ended up, Morse finished in a three-way tie for the fifth and last spot along with Robert Thompson and Roger Chapman. Playing the 400-yard first hole back into the wind, Morse said in spite of his final hole bogey he had “a good attitude in the playoff.”

“I hit a good drive and then a solid 7-iron to within ten feet of the flag.” After both players missed their birdie tries and after picking up a little read on one of the putts, Morse “made a good stroke and it went into the hole.”

With the exception of certain invitationals like the season-starting event in Hawaii and the Legends of Golf tournament, Morse is exempt for all of the regular Champions Tour events in 2011. “Right now, I expect my first start to be in Florida in February. I hope to play at least 19 events as I did in 2009.”

When asked if he has any different goals this year than in 2009, Morse said, “My plans are to just go out and play golf and not worry about anything.”

Morse previously earned his Champions card in 2009 but he lost it when he ended the year outside of the Top 30 money list, finishing in the 59th spot with $254,741 in winnings. In 2010, he played in three Champions event, via Monday qualifying, and earned $57, 364. A former University of Michigan and Big Ten standout, Morse won the 1990 Australian Open, 1991 New Zealand Open, 1993 Nike New England Classic, and the 1995 Hawaiian Open. In the 1996 U.S. Open at Oakland Hills, Morse was in contention for the title during his last nine holes and ended up in solo fourth spot.

Meanwhile on the regular PGA Tour circuit, no Michigan players advanced to the final stage of qualifying school. Last year’s card holder, Jackson’s Brian Stuard, missed by a shot from advancing. Other Michigan players not advancing were Matt Harmon, Randy Hutchinson, Andy Ruthkoski, and Bill Rankin. On the LPGA Tour, the final qualifying stage will be Dec 8-12 in Daytona Beach, Fla.