To many graduating college students with an interest in sports and especially in golf, Grand Rapids native Kevin Wright, 24, has a dream job. For the past five months, Wright has been serving as one of the Tournament Coordinators for the 92nd PGA Championship to be held Aug.12-15 at Whistling Straits. In April 2008, Wright graduated with a BA degree and a major in History from the University of Michigan where he also spent four years as a sportswriter for the Michigan Daily. Wright landed internship positions with the PGA of America at the Ryder Cup Matches at Valhalla in September 2008, at the PGA Senior Championship in Cleveland in May 2009 and at the PGA Championship at Hazeltine last summer.  Now a key staff member of the operations team for the 2010 PGA Championship, Wright slowed down enough in the hectic weeks leading up to the season’s “last major” to speak with Terry Moore who coincidentally graduated from Michigan and also majored in History, ominous precursors for a golf career. Here are excerpts of their “historical” conversation.

How did your first internship come about and what was your first task? Actually, I learned about it online during my senior year through the University of Michigan’s Career Office. I saw the listing for an internship with the 2008 Ryder Cup at Valhalla, applied for it in February and was selected before I graduated in April. I was selected to be one of 25 interns assisting the tournament coordinators. My first task along with another intern was to paint and touch up a white picket fence surrounding the Championship Office. I must admit we had to re-paint it the next day. It was an incredible experience to be part of the Ryder Cup. After that I applied for another internship in Cleveland for the Senior PGA Championship at Canterbury. I was one of only six interns there and the learning curve and the “to do” list were greatly accelerated. From there, I went on to Hazeltine for the PGA Championship. It usually takes three or four internships or assistants positions to be considered for a coordinator’s position so I’ve been very fortunate.

What are you major duties as a tournament coordinator? First, I’m in charge of the interns involved with operations. I oversee their daily tasks and make sure they get their jobs done. Secondly, I’m in charge of several different spreadsheets involving local vendors and how they interface with the tournament. For example, I make sure our local furniture vendor for tables and chairs has someone like me to work with and provide direction. It’s the same with our vendors making product deliveries, say Pepsi, or setting up trailers by Mobile Mini. The PGA has architects that carefully design and plan out our various sites and our team makes sure that space is accurately used.

Have there been surprises as a tournament coordinator moving up from an internship position? No surprises really. It’s been exciting to see the Championship from an office perspective. As an intern, I would be hired a month or so before the tournament but here I was hired in March, well before tournament week. As an operational assistant or as an intern, I didn’t have ultimate responsibility for an overall task. If you made a mistake you could learn from it and shake it off. Here I don’t go home at night unless that task is done. But I like that sense of responsibility and have grown from the experience.

What’s the most stressful part of your job? It’s not as stressful as it’s motivating. You see the fencing going up and it motivates you to get the wind screen installed in the right way where it’s clean-looking with no wrinkles. We take pride in attention to details. Also, this year we have ten interns as opposed to 15 last summer at Hazeltine. So it’s been especially motivating to me to get the job done with fewer assistants. It’s made me more focused.

With only a short time left until tournament week, can you describe your task list? In our office, we have a big board that lists 30 different tasks each day that need to be completed by the interns. So making sure the interns complete all those tasks each day is part of my job. And then I have my own “to do” list that I manage and carry out.

And how do you manage and keep track of all your tasks? My “must have” tool is my reporter’s notebook where I keep track of my daily jobs. Although I rely on spreadsheets on my computer for the major stuff I still like to use the pen and paper method for staying on top of my day. I guess it all goes back to when I worked as a reporter for the Michigan Daily at U-M.

Speaking of U-M and education in general, what classes or skills have been particularly useful for you here at the PGA? Growing up, I was always taught by my parents to be organized and that’s carried with me throughout high school and college. But in addition to organizational skills, it’s important to know how to work well with people. Being from a large and diverse school like Michigan and interacting in classes with lots of people from different backgrounds was very beneficial. Also, the ability to speak effectively in small group and public settings is important. Communication skills are vital.

Could you have taken any different classes or experiences to better prepare you for your work with the PGA? No, not really; because part of the PGA experience is learning it and there’s no substitute for that. It’s almost better not to go in with preconceived notions. You can’t always assume that every event is the same and is set in stone. I was lucky to intern at three different events and every one was its own living and breathing animal. You have to adapt and learn at each one.

What’s your golf background? I play golf but not very well and not too often. The other week, I hit a ball so far left it went right into Lake Michigan. In high school, I played basketball and baseball, so those were my major sports. So I didn’t start following golf until after high school. But my passion for the game is growing. The Ryder Cup at Valhalla was amazing and exciting and it really gave me a new appreciation for golf. My motto is that I’ll never be a very good golfer but I always enjoy playing and the course. 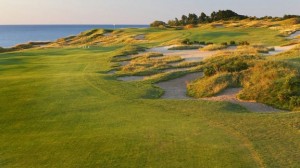 Okay, about this golf course. What are some suggested bleacher spots at Whistling Straits? Steer someone in the “Wright” direction. The clubhouse is gorgeous and there are huge bleachers around the 18th green so that’s one ideal location especially toward the end of the day. In terms of the front nine, it’s hard to beat the grandstands behind the first tee where you can also see some of the ninth green. There’s something special about hearing the golfers’ names being announced and watching their first drives of the day. And on the back nine, there are bleachers around the greens of the 12th, 15th and 16th holes that are perfect and also offer wonderful views of Lake Michigan.

photos courtesy of The Michigan Daily and the PGA of America