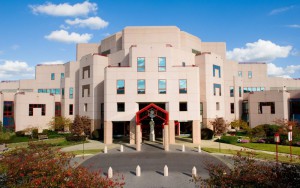 This was supposed to be a preview of the FedEx St. Jude Invitational at TPC Southwind in Memphis, Tenn. Now part of the elite World Golf Championship Series, the tournament’s defending champion is Dustin Johnson who eagled the final hole last year and finished six shots ahead of Andrew Putnam. Being a Michigan scribe, I would have mentioned that Jackson’s Dave Hill won four times in Memphis during his illustrious career—1967, ’69, ’70  and ’73. At the time, Hill was dubbed the “King of Memphis,” with no apologies to Elvis.

But after visiting St. Jude Children’s Research Hospital last February, this story is about that extraordinary hospital, known world-wide for its research and treatment of childhood cancers. And this story is how 30 years ago that hospital indelibly touched the lives of Grand Rapids natives Mike and Marge Bush and their young son Brian.

In 1983, Mike and Marge came face to face with a parent’s worse fear: their child had cancer. A third grader at the time, Brian was experiencing frequent nausea and was taken to the family’s physician who recommended further diagnosis at the local hospital. It was discovered Brian had Medulloblastoma, the most common malignant brain tumor in children. Brian underwent surgery and the tumor was removed. To further combat any remaining cancer, radiation treatment followed next and the prospects for Brian’s full recovery looked promising. 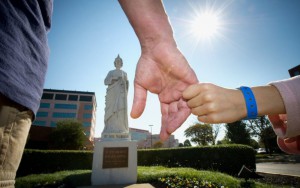 “Brian was doing well and then five years later in 1988, when he was a high school freshman, the cancer came back,” said Mike. The local Grand Rapids hospital—St. Mary’s—following the recommendations of St. Jude Children’s Research Hospital, performed surgery again and sent the tumor to Stanford University Hospital for analysis. But after the malignancy insidiously reappeared again, Brian’s doctors referred his case to St. Jude. At that time, the survival rate for Brian’s type of cancer was less than 3%. The Bush family soon were in Memphis staring at the hospital’s statue of St. Jude Thaddeus, the patron saint of hopeless causes.

At this point in the story, the reader might sense a hopeful outcome for Brian. Sadly, it turned out otherwise. The cancer was too far along to make a difference despite the noble and valiant efforts of the doctors and nurses at St. Jude. “They did everything humanly possible,” said Mike. 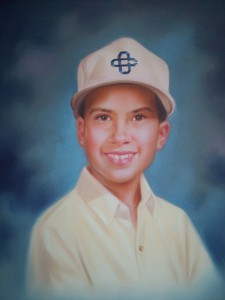 With his family surrounding him with their loving presence and faith-filled prayers, and after receiving the sacrament of Holy Communion, Brian slipped into a coma. Without any prior contact by the family, three nuns from the order of Mother Theresa appeared outside Brian’s door and asked if they could pray with the family. They stood at Brian’s bed and recited a favorite prayer of Brian’s and his fellow students during his brief time at Catholic Central High School.

“Brian died peacefully on April 1,1989 at St. Jude.  God called him home. It was a grace-filled yet wrenching experience,” recalled Mike.

Medical expenses for Brian’s months-long ordeal at St. Jude totaled over $100,000 but none of it was borne by the family. “We never knew when we got to St. Jude that everything was paid for. We discovered we were under the hospital’s umbrella and its credo that ‘families never receive a bill from St. Jude because all a family should worry about is helping their child live.’”

As in the case of the late entertainer Danny Thomas, Mike and Marge found a mission and a path forward with St. Jude. “After experiencing all the good that St. Jude does for children and their families, we knew we had to give back,” said Mike.

Although not as grandiose as a PGA Tour stop, a miniature golf event dedicated to St. Jude Children’s Hospital and Brian’s memory was started in August of 1989. “We raised $1,000 mainly because all the volunteers chipped in extra funds to reach that modest goal, but it was a start,” said Mike. 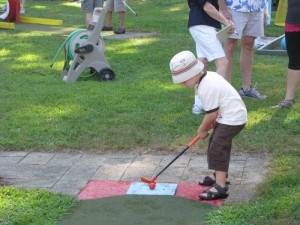 Thirty years later, the Brian Bush Putt-for-Life has raised $727,800 for St. Jude. Last year, the event raised $40,575 and that’s without a corporate sponsor so commonly found among charitable causes. Over 400 participants will turn out this year on July 27 for the friendly and festive gathering at Loeschner’s Village Green in Grandville, Mich. All the prizes and food will be donated as will the use of the facility thanks to the generosity of owner Mark Loeschner. Says Mike: “We are so blessed to have so many supporters who love to raise money for St. Jude. For many, it’s a ministry and a part of their lives.”

And their efforts are making a difference for over 7,500 children and their families battling cancer each year at St. Jude. Mike and Marge report that Brian’s cancer— Medulloblastoma—now has a treatable success rate of 85%. Part of this remarkable success is due to St. Jude being home to the world’s first proton therapy center solely for children. Unlike the rigorous and invasive brain surgery endured by Brian, proton therapy allows doctors to aim high-dose radiation at cancer cells and spare healthy cells.

Such treatment is expensive. This year it will cost approximately $1 billion to operate St. Jude, with its 3,600 employees, and the majority of that must come from generous donors. But with people like Mike and Marge Bush, along with thousands of fundraisers across the country ranging from hot dog sales to miniature golf tournaments to a World Championship stop at TPC Southwind, there’s no such thing as a hopeless cause.

Rather, it’s all about “Finding Cures, Saving Children.”

To learn more about the Brian Bush Putt-for-Life, visit www.puttforlife.com