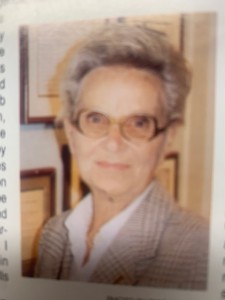 The news of the massive fire at Oakland Hills Country Club (OHCC) is devastating not only for its members and staff but for anyone with an appreciation for golf history. Thankfully, no lives were lost or injuries incurred. As it’s often said in such cases, lost lives can’t be replaced.

But what is irretrievably lost at Oakland Hills is its treasure trove of trophies, photographs and memorabilia, most of them gathered and displayed in the Heritage Room and hallways of the second floor of the clubhouse. I’ve been fortunate to visit the area on several occasions and was always duly impressed with the care and scholarly detail that went into the displays.

I fondly remember my first encounter with Oakland’s historic collection when in early 1996, as a preview to the club hosting that June’s U.S. Open, I spent a morning with Kay Healey, OHCC’s unofficial historian and archivist.

The widow of William Healey, club president in 1976, Kay told me she first became involved with the club’s history and archives when she served on the House Committee. “At the time, there were pictures in books, photos in closets and attics—just about anywhere in the club,” said Healey for my Editor’s column in June 1996. She credited committee chairman Bob Wood for suggesting a “galleria” on the second floor with its long hallway.

That hallway reminded Healey of a hotel in San Diego that had a similar space, one that was enlivened by historical photos of the city and the hotel itself. “That was my inspiration for the galleria here at the club.”

As I wrote in 1996, “memories are in abundance in the galleria.” There were tournament programs, gleaming trophies, framed newspaper clippings and hundreds of photographs worthy of a golf museum, which it was.

At the time, Healey told me that the most popular photograph among members was oddly not of a national champion crowned at OHCC. Not Ralph Guldahl, or Ben Hogan, or Jack Nicklaus, or Arnold Palmer, or Gene Littler, or Ricky Barnes.

Rather it was a Norman Rockwellesque photo of Herbert O. Shave, the club’s first superintendent, sitting under a shade tree and next to six-year-old Mike Conroy, son of the North Course pro Leo Conroy.

Said Healey at the time, “That photo seems to resonate with innocence from a bygone era.”

Sadly, that cherished photo is presumed to be lost.