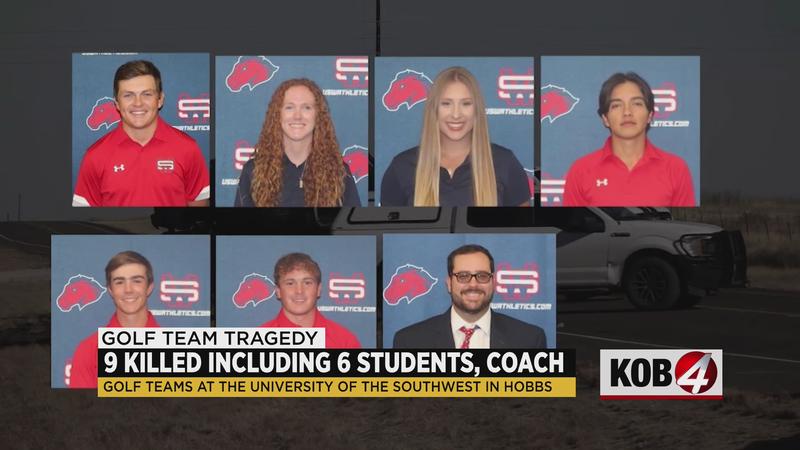 An accident that took the lives of nine people last week in Texas gave me a chill. A 13-year-old boy was driving a truck when it hit a van and killed nine passengers in all, including a college golf coach and six of his players in the van, along with the boy and a man in the truck. Early accident findings concluded the truck hit the van head-on after the truck’s left front tire (a smaller size spare) blew out, making the vehicle veer into the van. Both heavy vehicles went up in flames near Andrews, Texas.

The University of the Southwest, a private Christian institution in Hobbs, NM, near the state line with Texas, said the victims were members of the women’s and men’s golf teams. Two surviving golfers are still in critical condition and are at a hospital in Lubbock.

After hearing of the accident, I spoke with Don Underwood from The Meadows GC at Grand Valley State University who spent 20 years as the men’s golf coach in Allendale.

“Just terrible,” said Underwood. “I don’t ever recall an accident like this happening to a golf team. Other sports, yes, but not golf.”

When asked about his routine as college coach transporting players, he said: “I was always behind the wheel. I knew my skills the best and felt more comfortable that way.” He said occasionally he’s get one of his older players certified by the Athletic Department in order to drive the van in an emergency. “But sometimes I would simply pull into a rest stop to get some relief or if late at night, I’d check us into a motel.”

As a former high school golfer, I remember traveling to meets in our coach’s old Plymouth with the winged fins. We made light of the car but not our coach, Mr. Jules Sommer. A kind-hearted and dedicated coach with a good sense of humor, Sommer never claimed to be a golf instructor. Rather, he offered encouragement and direction while urging us to work on our short games. And although he didn’t say it, his biggest responsibility was getting his team safely to the course.

As players, we used to say Sommer “drove the big boat well.”

Another high school golf coach, East Grand Rapids’ Carl Nestor—my brother’s Tim coach—put his coaching tenure in perspective when he was inducted into the Hall of Fame for the Michigan Interscholastic Golf Coaches Association (MIGCA) in 1992. I happened to interview him at the time.

“Of all the things I’m proud of in my 30-odd years of coaching, I’d have to say it wasn’t the State Championships. Instead, it was never having an accident while driving my players. I know it may have been simple good luck but I was always aware of my responsibility.”

I also asked Kim Napieralski, the current golf coach for the boys and girls golf teams at Catholic Central HS and a recent inductee into the MIGCA Hall of Fame, of her reactions of the accident in Texas. She said: “How horrific for all. I pray our team travels safely every trip because I carry precious cargo.”

I also recall the words over 20 years ago by my youngest daughter who earned All-City golf honors as a high school senior. When I asked her if she might go out for the college golf team, she quickly replied, “Sorry, Dad, but I don’t wanna be in a van for six hours.”

Tyler James, the 26-year-old coach at The University of the Southwest, was behind the wheel of the college van and undoubtedly was driving alertly in his lane when a tire suddenly blew on an oncoming truck. Nine lives were lost in an instant.

To donate in support to the victims and their families, visit:

P.S. In Texas, 14-year-olds can attend a classroom portion of a driver’s education curriculum, but they cannot apply for a learner’s license until they reach 15, according to the Texas Department of Public Safety.