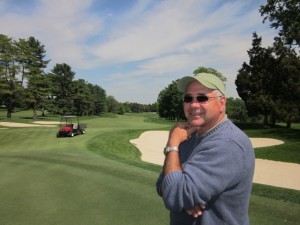 In all, Giuffre has overseen the maintenance operations for six different Tour events spanning 13 years for such tournaments as the B.C. Open, the Kemper Open, the Booz Allen Classic, and the A T & T National. At Congressional for the past 12 years, he also prepared the club’s Blue course (site of this year’s U.S. Open) for the 2009 U.S. Amateur. In May, Giuffre gave me a personal tour of the Blue course (there’s also a Gold course), sharing insights on its renovation and preparation for its third U.S. Open and its first since 1997 when Ernie Els won. Understated and self-effacing, Giuffre was quick to credit Congressional’s impeccable conditions to its membership (3,000 in all!) and to his staff. He’s the sort of person who recalls golf course architect Rees Jones’ apt line about another hard-working, unpretentious and no-nonsense superintendent: “He’s all solutions and no excuses.” After spending almost two hours with Giuffre on a sunny Friday morning and yes, being outdoors, I didn’t know what or who impressed me more: Congressional or its superintendent. –Terry Moore

Q: Officially at 7545 yards, Congressional will be the longest U.S. Open course. Will it play that long?

A: No, Mike Davis has said it will probably be set up to play in the range of 7200-7400 yards. With multiple teeing grounds, he has many options throughout the course on how holes may play differently for certain days. The par-three second hole can be played at a full 233 yards but I imagine Mike will also use the shorter alternate tees on some days.

Q: Talk about the par-five 16th hole where you were asked to make some changes earlier this year.

A: This will be an intriguing hole and one that will pose some options for players. At 579 yards, it will still be reachable in two for many players especially if the tees are moved up for some rounds. Wanting to add some thinking into the second shot, the USGA asked us only a few months ago to remove all of the bluegrass sod–the rough—around this green and replace it with bentgrass and have it all mown down.  So now if a player goes for the green in two and misses it left or right or over, his ball may end up in some trouble—underneath some pine trees right or going out of bounds left. It should be an exciting and underrated risk-reward hole to watch come Sunday afternoon.

Q: Changing gears, talk about your first job in the business.

A: My first golf course position, during the summer only, was at Grand Traverse Resort in my hometown of Traverse City in 1979.  My first job was staking large trees that were moved with a tree spade on the Bill Newcomb-designed course which is now known as Spruce Run.  I was promoted to Assistant Superintendent position of the Newcomb course in 1983 by Jon Scott who took over as the Superintendent.  As the Assistant, I supervised the daily maintenance of the Newcomb course.  I was at Grand Traverse Resort during the construction and opening of the Jack Nicklaus-designed The Bear in 1985. After graduating from Penn State University in 1985 I was promoted to the Superintendent of The Bear.

Q: How did you end up at Penn State instead of Michigan State?

A: I went to Penn State because M.S.U.’s program was full the summer I applied. Fortunately, Penn State had an opening in their program at that time.

Q:  How was it coming here to Congressional and following a legend in the business, superintendent Paul Latshaw?

A: I succeeded Paul, the best in the business, and he had things in excellent shape when I arrived. He did a marvelous job with the greens he had inherited for the ‘97 Open. Following him was easy in the respect of the conditions I inherited. But it wasn’t easy following someone with such stature as Paul. You don’t fill Paul’s shoes—you just do what you do best and hope you grow into them sometime.

Q: The leadership and membership at Congressional must be applauded for not only undertaking such major renovations but also to host so many tournaments.

A: Yes, they’re willing to take their course out of play in order to make it better for the long term and that takes a lot of dedication. The club’s always striving to make both courses better and are willing to share their course for the good of the game. In addition to three Opens, a Senior Open, an Amateur and a PGA, the club has hosted the Kemper Open, the Booz Allen and the AT&T.

A: Hire people that are better than you in many different areas. Let their talents shine while giving them direction at times. But I also learned you’re smarter to get out of the way. I can’t say enough about the staff and team here—they put their hearts and souls into the changes made over the last two years. Simply put, you can’t do it without great people around you.

Q: I imagine you don’t have much time to play golf so what else do you for relaxation?

A: You’re right about golf. I only play a couple times a year–I’m a recreational golfer. I like to fish and we have a cottage an hour or so away that’s a nice spot for us to relax. My wife, Emily, reminds me not to worry so much.