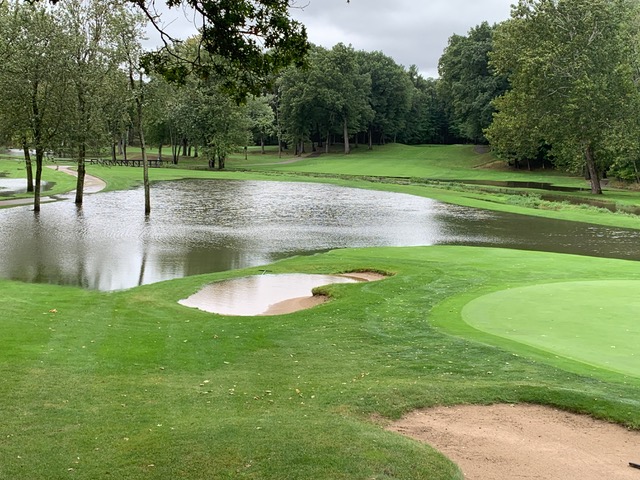 After a rainstorm, Kaufman’s 18th hole

Since it opened in 1965, I’ve been playing Kaufman Golf Course in Wyoming, MI. Under the auspices of the Kent County Parks Department and designed by Bruce and Jerry Mathews, it’s long been regarded as one of the most popular and best municipal courses in Michigan. It possesses excellent daily course conditions, a pleasant setting within Palmer Park, and the right balance of challenge and playability.  And for the money, it can’t be beat.

Its only downside is the regular flooding of Buck Creek from rainstorms causing holes one, ten and 18 to be unplayable. Although there have been improvements in recent years to lessen the flooding effects on the course, no comprehensive plan has ever been implemented or publicly voiced to tackle the issue. Meanwhile, numerous golf days have been increasingly lost to flooding over the last 25 years and no long term remedy is in sight.

What are the culprits? To be sure, it’s inadequate storm water management, impervious surfaces and development along Buck Creek. But it’s also a lack of leadership by various recreational,  environmental and governmental stakeholders to fully address the issues posed by Buck Creek, a major watershed for Kent County and surrounding municipalities.

And despite what some people have said, the flooding wasn’t always this much of a concern.

I spoke with one former employee at Kaufman GC who said, “Buck Creek didn’t impact the course as much in the late ‘80s. At that time, there wasn’t all the development upstream at nearby 54th St and Clyde Park Ave.” (Today, in that same area, you’ll find a Meijer, a Target, a Menards and several other restaurants and businesses.) “The flooding steadliy got worse.”

Another source was Ken Yonker, the elected Drain Commissioner for Kent County. He informed me Buck Creek is not within his jurisdiction but rather that of the State of Michigan. “Buck Creek is deemed the waters of state,” said Yonker, a former State Representative.

“Even dredging Buck Creek, which might lessen flooding, would be a state decision not a local one.”

Upon hearing of the chronic issues of Buck Creek flooding and how it has impacted Kaufman, Yonker had some salient observations. “You can’t band aid a water problem; it just doesn’t work. Water is a powerful force. I’ve learned temporary fixes only cost the taxpayer more in the long run. Better to spend the money on a major fix upfront.”

In research for this article, I also contacted the State of Michigan and spoke with Jill Greenberg, spokesperson for the Michigan Department of Environment, Great Lakes and Energy. (EGLE)

After consulting with the Grand Rapids office, Greenberg said the Buck Creek case has long been a “problem child and another example of a statewide issue calling for building a more resilient infrastructure. There are flooding issues throughout the state.” Greenberg cited related problems include increased urbanization, loss of wetlands and impervious surfaces.

When asked if dredging had ever been considered for Buck Creek to help with water flow, Greenberg couldn’t confirm if it had.

Naturally, I wanted to get feedback and comments from officials at Kaufman GC and at Kent County’s Park Department. Unfortunately at both offices, a “no comment” was issued to my formal inquiries.

Parks Department Director Dan DeLooff, who oversees Kaufman, did provide me via email with this information when asked about past flood mitigation actions taken by Kaufman via email:

“Between 2011 and 2016 we installed several phases of gravity drains and crocks with pumps.  This has considerably shortened the time we are closed for play.  We are also members of Friends of Buck Creek and additionally hold several creek clean-ups per year including removing blockages from the creek within our limits.”

And these measures are to be applauded. Essentially, these actions have not abated the flooding per se but they have allowed the standing water to flow back into the creek and not sit on the fairway, killing the grass.

Another source told me the “no comment” by the Parks Department is not a surprise. “When it comes to Buck Creek and its flooding, it’s a hot button issue among Kent County Commissioners because it’s basically about money.”

I received a similar wary and very limited response when speaking to Aaron Vis, a volunteer for  Friends of Buck Creek and also the Assistant Director of Public Works for the City of Wyoming, where Kaufman resides. In terms of commenting on Buck Creek’s flood issues he wasn’t authorized by the City to speak on the issue. Later I contacted him again, leaving him a voice mail asking whether he or his boss (Myron Erickson) had been granted authorization to speak with me on it. I never received a reply.

That’s a sad commentary on govenment-public information and transparency.

Is there hope for Kaufman and its ongoing battle with Buck Creek and its overflooding?

In fact, there is. Another municipal course faced similar hurdles head on, attracted the support of and funding sources from a wide array of stakeholders and ended up “fixing the problem” while earning national acclaim.