Long a winter haven for Michiganders, Naples is teeming with fine courses. Although the area has been rocked by the collapse of the overheated real estate market, Naples is still one of the most attractive places to play golf in the winter. The climate is ideal with almost guaranteed sunny and warm weather from January through April. And virtually every major golf course architect save Alister MacKenzie and Old Tom Morris has a signature design in the area.

One of the premier golf communities (i.e. private but actively seeking members) with two excellent golf courses is Mediterra. I played the South Course designed by Tom Fazio and it was a delight. Opened for play in 2000, the South Course is a tough but not too penal members’ layout. I particularly liked how the well-placed and plentiful bunkering was offset by the generous and wide fairways. Fazio gives you lots of space off of the tee and then demands a good strike into the green complex. A good example is the par-five 7th hole with its huge landing area off the tee. But as one confronts his second and third shots, the path is narrowed and requires a more precise shot. Everything about the conditioning and the layout was top-notch. Although I didn’t have time to play it, the neighboring North Course is also well-regarded by members. Fazio and his team tweaked this 2002 design to mirror but not mimic the South Course. Fairways on the North are inviting but require more concentration and control than the South. And to offset the demands off the tee, the approach shots into the greens are wider and more forgiving. It’s a sensible way to design sister courses in a golf community. Make them compatible but not identical. One added note. I liked this simple credo printed on the Mediterra scorecard: Persons using the golf course should do their part to make a round of golf a pleasant experience for everyone. 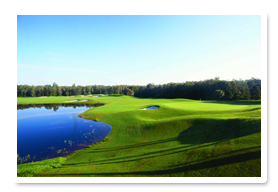 Another admirable Fazio design and a local player favorite is the Bonita Bay East’s Sabal course. The course is situated amid beautiful and natural surroundings and named for its distinctive native sabal palms. I always love a course which opens with a smart, get-play-moving straightaway par-four and this course nicely adheres to the maxim. The Sabal course is known for its rolling, undulating fairways and expansive bunkering. And the greens have lots of movement in them requiring a deft touch around them. Opened in 1999, the course has matured nicely and unlike so many courses in the area has a sense of isolation and space to it. I also liked the yardages for the Sabal, ranging from 7039 to 4970 and with the middle distances being a modest 6323 and 6509 yardages, just right for competitive senior play. And Fazio has offered up a variety of golf holes that makes for a lively experience. There are long and short par-fours and three-shot and reachable par-fives. And there’s water in play but not too many forced carries so it’s playable for all handicaps. This is a very good golf course with lots of imagination behind it.

One final note here: The courses at Mediterra and Bonita Bay were owned by the Bonita Bay Group which incurred sizable real estate losses over recent years. After long negotiations, Mediterra and Bonita Bay were purchased in the past year by their respective memberships. The Naples Daily News applauded this development at Mediterra saying the members “did what they believed they had to do to stabilize their community and in the long run protect their investments.” Similarly, the Bonita Bay East courses were also purchased by members and re-branded under the New Leaf Management Group. It’s making smart and innovative moves in attracting new members and guest play including offering seasonal “passports” where golfers could play the Sabal and Cypress courses on a rotating daily basis.