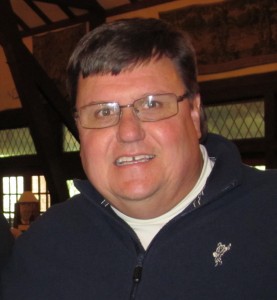 In a distinguished career that’s still a work in progress, award-winning sports journalist and golf writer Greg Johnson filed his final stories this past week for The Grand Rapids Press. As the case with many of his colleagues over the past few years, Johnson’s position was eliminated as the 120-year-old newspaper drastically downsized its operations in the new digital age. Although the ending was both sobering and bittersweet, Johnson harbored no regrets and remained upbeat about his future.

“I loved my job and loved being a sportswriter,” said Johnson in a phone interview from Tampa where he covered Michigan State’s dramatic bowl win over Georgia. “Now entering a different phase in my career, I’ll be taking the time to investigate some of the interesting opportunities presented to me. But even if I do something completely different, I still want to write.”

Thank goodness for that last remark because Greg Johnson is a gifted writer with a large and loyal following of appreciative readers, especially golfers. For over 25 years, he’s covered golf for The Press and made sure champions of local events received their fair share of acclaim in the newspaper. “Honestly, I had as much fun covering golfers such as Bob Sakocius and Tom Werkmeister at the West Michigan Amateur as I did going to the Buick Open and watching Tiger Woods,” said Johnson. “At local events it was so easy to get around and besides they gave me a cart,” he said laughing.

Although assigned to everything “from the Atlanta Olympics to a bocce ball tournament in downtown Grand Rapids,” Johnson says golf always had a special appeal. “I liked being around golf because of the people. There are good people in every sport but it’s something about the game—the decorum, the etiquette, the traditions—that separates golfers from the rest,” said Johnson.

According to Johnson, the Masters Tournament is also something separate and extra special. “Covering it is both a joy and a grind. It’s an amazing and beautiful place but the demands and stress of getting the stories right at Augusta are difficult for outsiders to understand,” said Johnson. “I liked how Dan Jenkins described being at the Masters as an ‘Alice in Wonderland-type experience.’”

Even when he was far from home at such storied and lush venues as Augusta National, Johnson never lost his perspective as a local newspaper reporter. He invariably found a Grand Rapids angle for one of his sidebars or notebooks during Masters week. Over the years, he mentioned Mark Wilson, a local PGA golf professional who served as a rules official at the Masters, as well as notes about a host of other West Michigan golfers who found themselves inside the hallowed grounds past Magnolia Lane. “Early on I understood that I was very lucky to be the readers’ representative and so it was my job to see the tournament through their eyes. It wasn’t difficult to find local angles at the Masters; you just had to be open to them,” said Johnson. “And often the best stories found me.”

On one occasion, a memorable story took root after Johnson learned a former Grand Rapids resident attending the Masters planned to honor his recently deceased best friend by tossing a symbolic memento into the famed pond at Augusta’s 16th hole. I vividly recall how Johnson and the individual spoke for hours about his late friend and all the Masters had meant to him. Sharing the same rental home that year, I also know Johnson was up writing until the wee hours of the night, making sure the story reflected the poignant truth, the undying friendship and the muffled grief of the day. Like the best writing, it was crisp and lean, universal and touched the heart.

“I’ve been fortunate to have learn so much from so many sportswriters,” said Johnson. “When I first started covering golf, Jack Saylor from the Detroit Free Press told me not to worry about my own golf skills. He quipped, ‘Heck, you don’t have to be dead to write a good obituary. Just observe the events, ask the right questions and write it down as you know it.’”

Greg Johnson listened well to his mentors and colleagues as he acutely observed sport’s many arenas, asked the right questions, and then ably wrote it all down as he knew it.  How fortunate are we, the readers, to have accompanied him on his journey.

But heck, this is sounding like an obituary. In the here and now, Johnson’s impressive career is merely taking a detour.

Greg, see you around the bend.