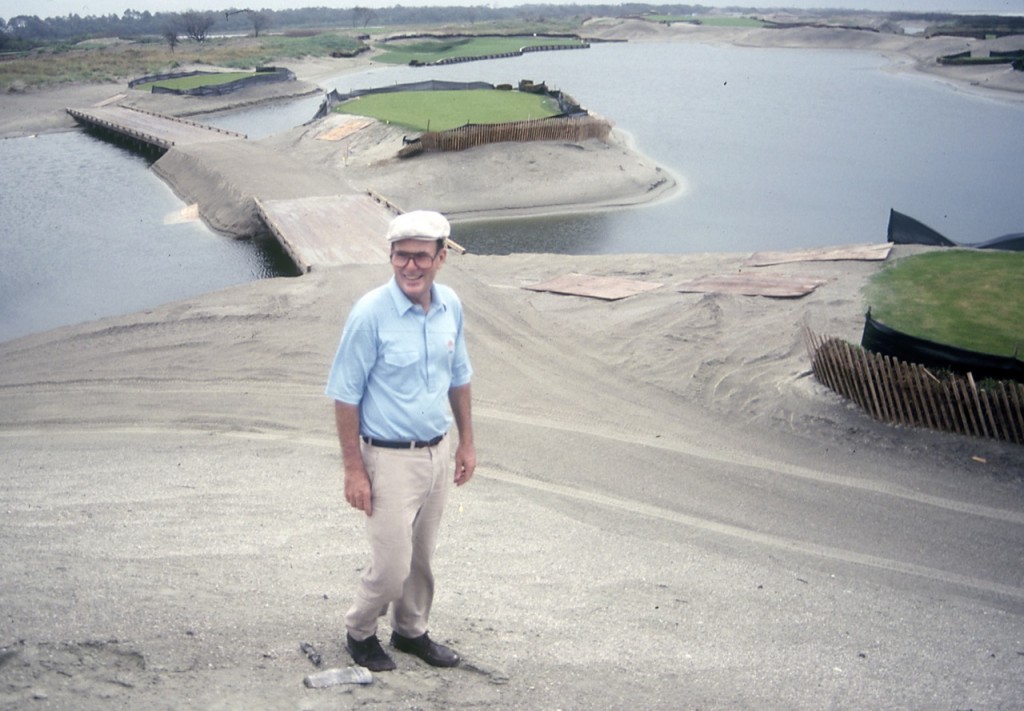 Circa 1990, Pete Dye was happy in the dirt at the Ocean Course

At 86 years young, Pete Dye is still happily getting his pants dirty and his boots muddy as he tackles yet another golf course design and construction project. Inducted into the World Golf Hall of Fame in 2008, Dye is widely considered the most influential golf course architect of the modern era, responsible for such luminous designs as Harbour Town, Whistling Straits, TPC Sawgrass (Stadium), Crooked Stick, Teeth of the Dog, Blackwolf Run, and the Ocean Course at Kiawah Resort, the site of the 94th PGA Championship. A few weeks ago, after walking his dog and hitting some practice balls, Dye spoke with me.

How much pressure was it to design the Ocean Course for the ’91 Ryder Cup?

It was a unique situation because the first players on the course were the team members. A brand-new course making its debut never happened before in the history of the Ryder Cup. It was the opportunity of a lifetime.

Were there special challenges in the building process?

We just started building the course when Hurricane Hugo hit the area [1989], wiping out a lot of our work. It was a mess. But then the governor issued a special moratorium on regulations so we could clean up the course including some of the swamps. We rebuilt the dunes and turned some of the salt-water marshes into freshwater ponds. Without the hurricane, the course wouldn’t have turned out as well as it did. Then Alice [Pete’s wife and fellow designer] made the smart suggestion that some of the tees and fairways needed to be raised so the ocean could be seen.

On Sunday at the 1991 Ryder Cup, did you ever think the par-three 17th would play as brutal as it did?

A few days before the start of the matches, the wind was out of the south and southeast. That meant it was behind the players on 17, which was set at 197 yards. [U.S. team player] Ray Floyd told me during practice rounds players were hitting 6- and 7-irons there. Then the weather forecasters predicted that the winds would change and come out of the north and northwest for the weekend. I mentioned to someone at the PGA they should move up the tee markers and the gallery area. But it was decided to leave them as planned for the final day. When the wind changed direction and became a strong head wind on Sunday, Hale Irwin actually hit a wood at 17 to clear the water.

How have you altered the course and protected it against the added length of Tour pros?

I went back there over a year ago and made many improvements. When I was building the course in 1990, I was already worried about how far the pros were hitting the ball. So I pushed dirt for some back tees then covered them up with high grass as kind of an insurance policy if they were ever needed. This year they’re going to use a number of those new back tees for the PGA Championship. We also brought some of the bunkers into play at 310 and 320 yards, where before they were at 280 yards. In all, we made changes to eight or nine holes to some degree with tees, greens, and bunkers.

What’s the most misunderstood aspect about you?

Many people don’t realize that I’ve never drawn up plans for a golf course. Some of my friends in the business devise elaborate design plans and then have someone else build it. I’m the only one dumb enough who just builds it.

Most misunderstood aspect about course architects?

When you’re building a golf course, you’re building it for the owners and trying to match what they want done and the type of course they envision. It’s rare when you have an owner who says, “Build me a course for the Ryder Cup.” Most of the time, it’s a residential property and you build it for the members like I did in Hilton Head at Long Cove. One of my earliest courses is Delray Dunes in Delray Beach [Florida]. I built it for membership play and it’s held up well over time. So in spite of what some people think, I’m always conscious of the type of players I’m building the course for.

What do you want to do in the future?

Well, I look forward to being involved with the Stadium Course in Ponte Vedra if the PGA Tour still wants me. I’ve reworked that course five different times now. Golf evolves and when you have a course like that you have to stay up with the changes in the game, the equipment and also agronomy. I had to rework all the greens at the Stadium Course due to how fast the greens were getting. Same with Harbour Town, where I never dreamed it would happen.

If you could sit down with two or three people at the 19th hole, past or present in golf history, who would they be?

Ben Hogan, Ben Hogan, and Ben Hogan. I played with him several times and it was always something special. I’ve played with a number of great players over the years but no one hit it as consistently on the clubface as Hogan did. Before his accident, he was such an outstanding ball-striker. But it was even more unbelievable to see him recover from his serious injuries and eventually strike it that well again. As an aside, I like to tell people that when Hogan won the ’53 U.S. Open at Oakmont, those greens were probably only rolling at a six if they had used a stimpmeter back then.

One Response to “Q & A with Pete Dye”