Elk Rapids GC: on the shores of Elk Lake

One of the delights of a summer week  in northern Michigan is playing a local course that’s an absolute delight. That was case a few weeks ago when I played Elk Rapids Golf Club in Elk Rapids. Although I’ve heard about it for years, I never had the opportunity to play it until my family stayed at White Birch Lodge on Elk Lake.

The course has a fascinating history. After enduring a decades long decline in population due to a shift away from lumbering and the closing of the town’s largest employer—The Elk Rapids Iron Works—the farsighted residents passed a $9,000 bond in 1922 to build a golf course and to increase tourism to the area. With the money, Donald Ross was hired who previously had made a name for himself at Oakland Hills, Rackham and Franklin Hills in Detroit.

Ross designed the course on the property of a 60-acre farm overlooking the North shore of Elk Lake, a lake that rivals Torch Lake for its deep blue waters. The course—named The Golf Park—had its grand opening on July 15, 1924. 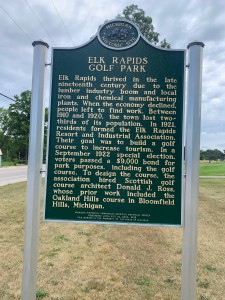 Today, the course has a robust roster of private members while welcoming guests and visitors alike to its walkable, nine-hole layout. There are three sets of tees, ranging from 2465 to 3067 yards. Ross touches are still evident at several holes, like the beguiling false front of the green at the par-3 sixth hole and the bunkers guarding either side of the fairway at the short par-4 seventh hole.

The overall turf conditions and putting surfaces at Elk Rapids were commendable and the gentle terrain made it a pleasant walk. Elk Lake is seen from most of the course and three holes play along side it.

Enhancing my round’s enjoyment was the good company of long-time friend John Jessup, a Traverse City resident who frequents the course on occasion, avoiding the busier venues of his native city in the summer.

Probably the only drawback to a visitor playing Elk Lake is enviously watching members enjoying a cold brew on its clubhouse deck, knowing its liquor license is restricted to members only.