Erin Hills: a big canvas for staging the U.S. Open

(Town of Erin, Wis) This is my seventh U.S. Open as a member of the media. My first one was the 1985 U.S. Open at Oakland Hills won by Andy North. Depending on its proximity to Michigan, I covered a number of memorable Opens, including Hale Irwin’s playoff win at Medinah in 1990 and Arnold Palmer’s last Open at Oakmont CC in 1994. I also attended the 1995 Open at Shinnecock and was following amateur sensation Tiger Woods when he withdrew from the tournament on the fifth hole after injuring his wrist. Of course, I was at the last Open held in Michigan at the 1996 edition at Oakland Hills, won by Steve Jones. But the first Open I attended was in 1962 at Oakmont when my parents stopped there on the way to New York. It was a mesmerizing experience highlighted by following my boyhood hero, Palmer. Every Open is compelling in its own way, most notably how champions emerge out of the pressure of the competition. This year, I’m most intrigued with Erin Hills and how it will test and confound the game’s best players. Two summers ago I played it and was very impressed with the layout, the conditions and its incredible space. I also was dog tired after playing (and walking) it back to back in successive days. If there had been a dance that evening, I would have sat it out. With rested legs, it’s good to be back at Erin Hills.

They talk about the high fescue but the bunkers at Erin Hills are also penal. On the PGA Tour, bunkers are so clean and pristine the pros routinely get up and down from them without undue stress. Remember a few years ago when Jack Nicklaus directed the bunkers at Muirfield Village to have furrows? As it turned out, it was a one-year experiment to create more challenge and uncertainty when the game’s best players found themselves in the sand. Well, there’s no need for furrows at Erin Hills because challenge and uncertainty abound here in and around the bunkers. As Mike Davis of the USGA said the other day to the media, “The architects purposely designed these bunkers to be penal. You’ll see nooks and crannies and crevasses…where you oftentimes do not have a level lie in the bunker.” I watched several players try to negotiate different bunker shots on Thursday and many had awkward lies and off-balance stances. The players must also adjust to the heavier brown sand, too. Most Tour bunkers are marked by fine, white sand. All in all, the players who avoid the bunkers this week, or get lucky with their lies when they do, will be in much better shape to avoid double-bogies.

The property at Erin Hills is immense. It provides a grand and dramatic stage for this National Championship. I liked how architect and Fox TV analyst Gil Hanse complimented the designers on Thursday for laying out the course on such a “canvas.” The USGA has wisely erected a number of huge grandstands to accommodate the gallery that might prefer to take in the action from a comfortable seat as opposed to heart-pounding stroll around this hilly, undulating layout. In this sense, Erin Hills reminds me of an Open Championship across the pond. As the golf demo gets older, it only makes sense for tournaments to plan for more and better seating for its patrons. The R & A has always done an admirable job with its grandstands, especially on the 18th hole. Thousands of fans can sit in the stands on the final hole and watch a parade of players finish. Likewise, the property and terrain at the 18th at Erin Hills provide a scenic grandstand experience.

No surprise after his record-tying round of 7 under par 65 today, Rickie Fowler was in a light-hearted mood in his post-round media interview. He credited his improved driving to a shortened driver of 43 1/2 inches. He hit 12 out of 14 fairways today. He also said he uses a 3-wood when he needs to draw the ball off the tee, a shot shape he lost with the shorter driver. When asked if it’s a compliment or a burden to be tagged with “best player not to win a major.” Fowler said it was a “compliment.” He said: “There are a lot of good players here without a major.” Perfect answer. This could be Fowler’s week. 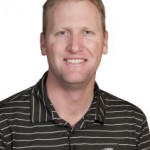 Ryan Brehm had the longest drive on no. 1

I watched Mt. Pleasant’s Ryan Brehm play his first two holes on Thursday. He was in the penultimate group off no. 1, a 608-yard par-five. He hit the longest drive of the day, 343 yards, which I confirmed with volunteers. He hit a long iron just short of the green where he two-putted for birdie. On the next hole a drivable 338 yard par-four, despite having the honors, he teed off third to make sure the green was clear. It wasn’t his best but even against the wind he was less than 35 yards from the green. He made par.

To give you the scope of Erin Hills, along the first hole there is a hospitality village that must be over 150 yards long. And that’s just one locale!. In all, there are eight separate hospitality areas spread throughout the property.

Concession prices: $3.00 for water, $5.50 for a hot dog, $7.00 for beer, $8.50 for a cheeseburger, $9.00 for wine, $9.00 grilled chicken, and $10 for a Cobb Salad. However, smart patrons brought their empty water bottles and filled them at USGA-provided hydration stations. Note: Late in the day the USGA announced it had discovered E coli bacteria from a sample from one hydration station near the 12th hole at Erin Hills. The USGA will provide complimentary water bottles at hydration stations for the duration of the championship.

How fast and firm did Erin Hills play on Thursday? Patrick Reed, who fired a 68, said he hit a 5-iron 250 yards on one hole. Also, Reed said he played the back plate of the back tee boxes in a practice round last week. He was told it played 8155 yards from there!

Ernie Els was strolling along in four under par for his first 16 holes and then went bogey, double-bogey to finish at 70. He also commented on the length of Erin Hills and what it bodes for the future.”These type of courses might be the future: 8,000 yard golf courses….I know my friends who are members at Shinnecock (next year’s U.S. Open’s venue) say the whole course has been moved back. So we’re probably going to walk 200 yards back to the tees from the greens at Shinnecock. So that’s how quickly the game has changed.”

Going off in the morning, Martin Kaymer had an interesting take on how he prefers tee times the first two days. “I actually like it more the other way around when you play late/early. That’s the way I won the U.S. Open in 2014 because I think the course gets harder as the week goes on….late on Thursday, Friday early is a little bit of a tiny advantage.”

One of the “feel good” stories this week, besides native son Steve Stricker, is Dru Love IV and his father, Davis Love III, who’s his caddie this week. This is Dru’s first professional event and he got into the Open as an alternate. He revealed noted sports psychologist and author Dr. Bob Rosella (“Golf is not a game of perfect”) consulted with him at the behest of his father. “Patience, and routine, and staying calm and not trying to get ahead of yourself. One shot at a time.” He’s a good listener as he shot 71.