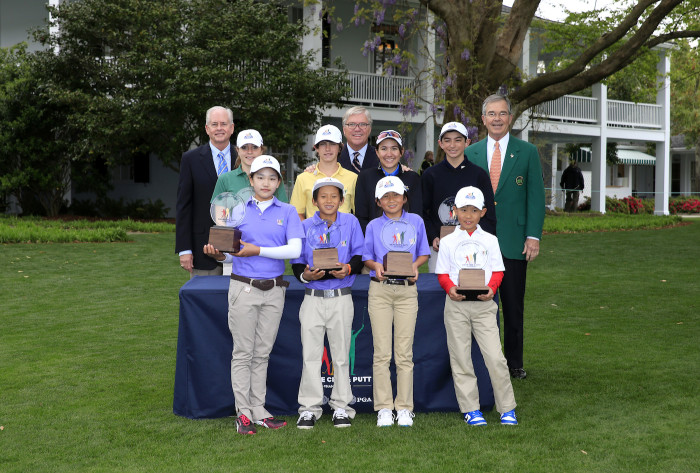 Here’s a regret for which I’ll receive no sympathy: I won’t arrive at the Masters until next Monday. OK, let me explain. Last year I made it to Augusta on Saturday, two days prior to Masters week. It was the earliest I’ve ever arrived. In fact, my friend and distinguished colleague Jack Berry, who’s covered over 40 Masters, told me recently the earliest he’d ever come to the Masters was on a Sunday. He remembers the day well because later that evening while watching television the owner opened the front door along with her beau, fully expecting her home to be empty until the next day. Let’s just say it was an awkward moment and called to mind those famed words of the movie, Cool Hand Luke: “What we have here is a failure to communicate!”

Sorry for the digression. You see, I regret not being at the Masters this Sunday because I’ll miss experiencing the second annual Drive, Chip & Putt National Finals. Last year I was there in person and it was one of the most enjoyable and uplifting days I’ve ever covered.

On a cloudy and overcast day with cool temperatures, 88 juniors competed in four age groups for both boys and girls. The event was a culmination of more than a year’s preparation which included local and regional qualifying events that attracted 17,000 youngsters from around the country. The juniors competed at locations on Augusta National’s massive practice area as well as on its main practice putting green and the famed 18th green itself. Not surprisingly, it was exceptionally planned and executed and exceeded all expectations. Besides marveling at the skill and poise of the young competitors, I relished witnessing the many big and small moments surrounding this laudable “grow the game” initiative. Such as:

Seeing defending champion Adam Scott willingly pose for photos with Tiva Chowary, who competed earlier in the Girls 10-11 age group. Speaking with her mother near the clubhouse after the competition, I learned Tiva joined her father at a driving range at age 3, attended an LPGA event at age 5 and started playing golf shortly thereafter. Now at age 11, she had a memorable photo with a classy Masters champion.

Besides Scott, several Masters players stopped and took in the junior competition over at the practice range. Bubba Watson spent at least 15 minutes watching several of the juniors competing in the long drive event. In fact, he watched Amanda Gartrell,15, rip it 225 yards on her best drive. In her bio, Amanda listed Watson as the “coolest person.” Imagine what a thrill that must’ve been for her.

The Masters attention to detail: Such as the juniors being issued a special player’s pin to wear, identifying them as official and honored competitors. And how Masters officials nicely allocated designated viewing areas and reserved seating for parents and family members who beamed with proud delight when not nervously biting their fingernails.

Youthful candor was best exemplified by junior Patrick Welch who described his winning putt on the 18th green to me in a one-on-one interview. From Providence, R.I., Patrick said, “Because I was leading at the time, I knew I just needed to get it close to win. But then I hit it too hard. Good thing it hit the cup!” Welch also won the 14-15 age group long drive competition with a smash of 253.6 yards. And, shades of the late Senior player Charlie Owens, Welch played cross-handed!

Augusta National member Condoleezza Rice announced the names of the juniors for their final 15-foot putt on the 18th green. But before doing so, she double-checked the pronunciation of certain youngsters’ names, many times inquiring directly of the boy or girl before the introduction. Rice was considerate and careful in her preparation for this simple yet important task. Of course, you don’t become Secretary of State by butchering the names of foreign heads of state.

What it meant to be in this competition was summed up by Natalie Pietromonaco, 13, winner of the Girls 12-13 group: “This was a life-changing experience for me…at the world’s best golf course.”

Life-changing is an apt description when dreams are formed and later realized. It recalled to mind when my parents took my brother and me to the 1960 PGA Championship at Firestone CC in Akron, OH. It was our first professional golf tournament and it left an indelible impression. The experience was more than just attending a tournament; it was as if a whole new world had opened up to us. The players we watched in awe that day—Arnold Palmer, Sam Snead, Mike Souchak, Doug Sanders—were heroes doing extraordinary things and we couldn’t get enough of it. In truth, that experience planted a potent seed into our hearts about the game we love.

Likewise, the Drive, Chip and Putt Championship—thanks to the vision and commitment of the Masters Tournament Foundation, the United States Golf Association and the PGA of America—is growing the game by planting its seeds in the hearts of talented youngsters.

What smart phone, app or digital game could possibly match that?