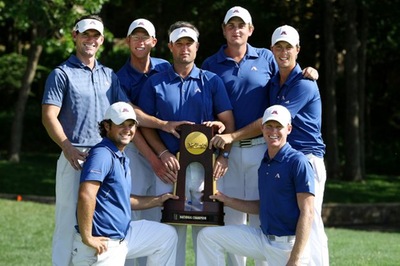 The back story on Patrick Reed is worthy of a soap opera or an ESPN 30 for 30. His collegiate career was highlighted by back-to-back NCAA team titles in 2010 & ’11 as a sophomore and junior at Augusta State University  (yes, in Augusta, GA). It followed a tainted freshman year at the University of Georgia. In Athens, after Reed was arrested for underage drinking and possessing a fake ID, he was placed on probation, fined and did community service. As detailed in Shane Ryan’s “Slaying the Tiger: A Year Inside the Ropes on the New PGA Tour,” Reed was later accused by teammates of cheating during a team qualifying round. After a second alcohol-related misdemeanor, Reed left Georgia for Augusta State.

The story gets more intriguing when Reed meets Justine Karain at Augusta State. They become a couple and despite the wishes of Reed’s parents they married in 2012. Reed’s parents (Bill and Jeannette) and his sister (Hannah) were not invited to the wedding and a chasm opened between the couple and Patrick’s family. Justine also became his caddie out on Tour. (After the birth of their first child, Justine turned the bag over to her brother Kessler.)

The family breach had a particularly sorry chapter at the 2014 U.S. Open at Pinehurst.

In February 2015, Sports Illustrated’s respected and award-winning golf writer Alan Shipnuck included this story in his profile of Patrick and Justine: ”A friend of Bill and Jeannette’s had extra tickets to the 2014 U.S. Open, so with some trepidation, they went to Pinehurst No. 2 and followed Patrick throughout the second round. Justine (Reed’s wife) was also in the gallery, but no words were exchanged. Walking up the 18th hole, Bill, Jeannette and Hannah were surrounded by police officers. They ultimately were escorted off the grounds and had their tournament badges confiscated by a USGA official who, according to Jeannette, said he was acting on Justine’s wishes.” The estrangement has continued now for six years.

On Sunday at Reed’s triumphant press conference at the Masters, Shipnuck asked:  “Your Augusta roots run pretty deep.  I’m just wondering if it’s bittersweet to not be able to share this moment with your parents and your sister?”

The next day Shipnuck posted a riveting story on golf.com titled ‘My son is a Masters champion’: Patrick Reed’s estranged family endures a complex mix of emotions.

Given family dynamics on both sides, it’s difficult to come to terms with and have a fair assessment of this saga. Regardless of one’s leanings, it resides in the sheltered domain of a personal family matter.  And as many might ask, is it really anyone’s business?

The Russian author Leo Tolstoy once wrote: “Happy families are all alike; every unhappy family is unhappy in its own way.”