“In the future, everyone will be world-famous for 15 minutes.” 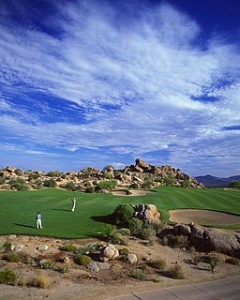 The late pop artist Andy Warhol uttered that iconic phrase. Well, the other day at Troon North’s marvelous short par-four 15th hole it served as my golfing epitaph. From the Gold markers, this Tom Weiskopf-designed gem, on the new Monument Course, measures only 283 yards yet it’s tight so it poses the classic risk-reward shot off of the tee. With our team needing to make up some lost ground to our competitors behind us, I elected to go with driver and try to reach the green, hopefully avoiding the yawning bunkers guarding the putting surface. Expertly lined up by our congenial and fine-playing host Brett Brooks from Troon Golf, I managed to strike one of my best blows of the day and it soared toward the promised land of the flagstick. With my pulse quickening, I later found my ball on the front portion of the green but with a tricky downhill 30-foot putt. Playing partner Jeff Wallach kindly held the pin as I studied..oh heck, let’s move this along: I canned it for an eagle deuce which generated a bevy of two-handed high fives. Although I had my share of eagles on both par-fives and par-fours, this was first time I had driven the green on a par-four and made the putt. I was living the dream and helping the team.

No more than 15 minutes later Wallach looked at his smart phone application, called Grow the Game Golf, which was providing a nifty real-time tally of the scores between our two foursomes. “I can’t believe this,” said Wallach. “That team also made an eagle on 15. Hey, they must be playing games with us.”

But here’s the rest of the story. The eagle was carded by Dave Akin, Director of Marketing for the sublime and award-winning Four Seasons Resort Scottsdale at Troon North. Naturally, Dave’s a busy guy and doesn’t play a lot of golf. In fact, he sported the highest handicap index of the our two groups. After his drive on 15, Dave had 85 yards left to the pin and..oh heck, he holed out for an eagle! And get this: he stroked on the hole thus netting him a one and thereby providing a double-whammy on my fast-fading moment of fame.

Two thoughts came to mind later back at the clubhouse

Thanks to Troon North and Tom Weiskopf for this wonderfully conceived and exciting golf hole, set amid stunning desert scenery.

And Mr. Warhol, kindly step over my cadaver and meet Dave Akin.

3 Responses to “Troon North, Andy Warhol and a once famous Golf Road Warrior”