Michigan had a caddie connection last week at Pebble. Grand Rapids’ Scott Dieleman was on the bag for Notre Dame football coach Brian Kelly and both of them even got some CBS-TV airtime over the weekend. An independent sales representative for Image Builders Inc., Dieleman became acquainted with Kelly when he was the successful head football coach at GVSU in Allendale. Dieleman once told Kelly that if a Pro-Am invitation ever arrived in his mail that he’d would be on the bag. In the late ‘70s and early ‘80s, Dieleman spent some time as a Tour caddie for David and Danny Edwards. In fact, the cover of the 1983 April/May issue of Michigan Golfer included a shot of Dieleman. 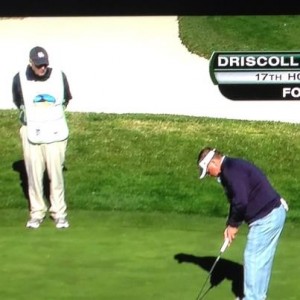 Dieleman: praying this putt goes in for Coach Kelly

Raised in Chelsea, Massachusetts, Kelly’s pro partner at Pebble Beach was Boston native James Driscoll who had a strong week finishing T-9 and earning $175,000. Their team made the cut and played on Sunday to end up in 23rd place at 22 under par. Their playing partners the first three rounds were New England Patriots’ coach Bill Belichick and pro Rickey Barnes who failed to make the cut.

“It was a great week especially by playing on Sunday,” said Dieleman by phone on Monday. “And Brian had his moments out there. A 13 handicapper, he helped the team 11 shots over the first two rounds which was the difference in making the cut.” Dieleman said Kelly had a nice stretch at the difficult Spyglass when he parred five holes in a row. He was was impressed with pros Driscoll and Barnes and also Belichick. “One would get the impression from TV that Belichick wouldn’t have much personality but on the course he was fun to be around,” said Dieleman. On Sunday, Kelly and Driscoll were paired with Jason Day and his partner Jim Harbaugh. “Day is such a phenomenal player,” said Dieleman, “and he hits everything so flush.”

Kelly had a hectic week. After arriving in Monterey on Sunday night, he played practice rounds Monday and Tuesday. He then flew back to South Bend and Notre Dame on Tuesday night, to be at signing day on Wednesday morning. Later that evening he flew back to Monterey where he arrived at Pebble Beach at 4 a.m. Thursday, only hours ahead of his 8:44 a.m. tee time. Meanwhile, Dieleman was holding down the fort at the Lodge at Pebble Beach. Tough gig, Scottie!

Success on the PGA Tour often gets down to playing well on Sunday because they don’t pass out those big checks on Saturday. That’s why it was encouraging to see three Michigan players fare well during the final round at the AT& T Pebble Beach Pro-Am. Leading the way was Wyandotte’s Justin Hicks who improved his Saturday night standing by 15 spots by carding a final round 67 to end up T-12, worth a healthy $131, 165. Also playing well in the last 18 at Pebble Beach were Mount Pleasant native Doug Labelle II and Jackson’s Brian Stuard, both of whom moved up 26 places by shooting 68s on Sunday. They finished T-30th for the week, worth $36,205. Meanwhile, Michigan’s other player in the field, Tom Gillis, didn’t make the cut after posting 71-81-75.

Also, high praise is due to Pebble Beach title sponsor AT& T for introducing its excellent “No Text on Board” campaign during the telecast, a timely and much needed initiative to combat texting while driving. Its TV spots were especially compelling with poignant testimonials from parents and spouses talking about loved ones who lost their lives due to the distraction of texting. Kudos to AT&T for raising awareness on this vital safety issue by also offering a free app to its customers on their mobile devices. When enabled and the vehicle is moving at 25 mph, the app automatically sends a customizable auto-reply message to incoming texts, letting the party know the receiver is driving.