In Moe & Me: Encounters with Moe Norman, Golf’s Mysterious Genius, author Lorne Rubenstein expertly explores the life and times of one of golf’s most eccentric figures and certainly one of its finest ball-strikers. I first heard about Norman through the writings of Rubenstein, the long time and esteemed golf writer for Toronto’s Globe and Mail newspaper. In fact, in the ‘80s Michigan Golfer reprinted a Rubenstein column about Norman which recounted some of his more zany exploits. One of my favorites was when Moe played a course for the first time and asked his playing partner how to play a certain hole. Norman was told it was simply “driver and a wedge.” True to his quirky personality, Norman teed off with a wedge and then hit his second shot onto the green with a driver. 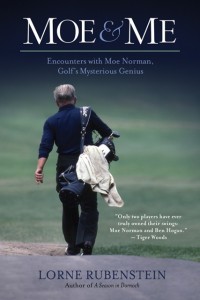 The curious case of Moe Norman is deftly told

There couldn’t be a better writer to relate the story of Moe Norman than Rubenstein, a member of Canada’s Golf Hall of Fame. The author first met Norman at 13 years of age when he and his father used to hit balls at the De Haviland Golf Centre in north Toronto. At the time, Norman gave lessons and sold golf equipment there. The Rubensteins were captivated by Norman’s amazing golf swing not only because it was so unique but because it was so effective. Norman would address the ball with his feet wide apart, his arms outstretched and with his hands much higher than normal. With no bend in his elbows, he then set his clubhead nearly a foot behind the ball. Although unorthodox, Norman’s swing was repeatable and possessed laser-like accuracy. And it held up during the heat of competition as Norman became a force in Canadian golf, winning consecutive Canadian Amateur championships and 55 career Canadian Tour events.

In the book, Rubenstein traces the arc of Norman’s life, his personality and his golf game. Looking back on his long and friendly relationship with Norman, Rubenstein says he “would chase the truth of the man” as a college student, as a caddie and as a writer. Moe was five when he was in a sledding accident where he was hit by a car. Soon after, he started exhibiting some strange behavior, speaking quickly and repeating himself which became a trademark personality trait for the rest of his life. Rubenstein cites one physician who felt Moe had Asperger’s syndrome, a spectrum of autism which includes repetitive speech patterns. But the youngster found a sanctuary in golf when he became a caddie at 10 at Westmount Golf & Country Club and where two years later a member gave him a five-iron. Golf quickly became the center of his small world especially after dropping out of high school at 14 and leaving home at 17. He was a loner and lived mainly in motels, hitchhiking from tournament to tournament and finally not owning a car until his late twenties. Observed Rubenstein, “Golf gives loners the freedom to express themselves. Moe expressed himself through golf.”

With an acute sensitivity to his subject, Rubenstein organizes a review of Norman’s life in telling chapters about his upbringing, his mind, his swing and reflections about him from friends and contacts in golf. A fine golfer and student of the game, Rubenstein dissects Norman’s game from public comments and solicited opinions from a number of teaching and Touring professionals. The most enlightening is the analysis provided by Craig Shankland, a noted PGA teaching pro, who conducted clinics with Norman for 18 years. Amazingly, all of Norman’s swing oddities coalesced to deliver a powerful and precise strike. For example, Shankland studied unique Norman’s set-up where at address his clubhead sat a foot behind the ball. This set-up, according to the teacher, prevented him from taking the clubhead inside, prevented him from lifting the clubhead, and thus encouraged a wide, on plane backswing. Shankland would marvel at Norman’s instinctive shotmaking. “We need these players. It’s necessary to allow individuality. I think we’re over-instructing players.”

But even Moe himself knew his swing was not for everyone. “Be yourself, be yourself. Don’t try to be me. You can’t be me.” And when offering advice, he often boiled it down in the simplest terms: “Two things you got to finish in this game, your backswing and your follow through.”

There’s much to relish in this deftly told narrative. Rubenstein probes the circumstances surrounding Norman’s two Masters appearances in ’56 and ’57 and reveals how Sam Snead possibly played a sinister role one year in Moe missing the cut. I also like the passages digging into Titleist CEO Wally Uihlein’s remarkable sponsorship of Norman beginning in 1995 which paid him $5000 per month for life with no strings attached. When the author asked him why he made such a decision, Uihlein said: “We just wanted to make sure that what doesn’t happen thirty years from now is that Moe is forgotten about when people talk about the best players.”

Moe & Me is published by ECW Press.