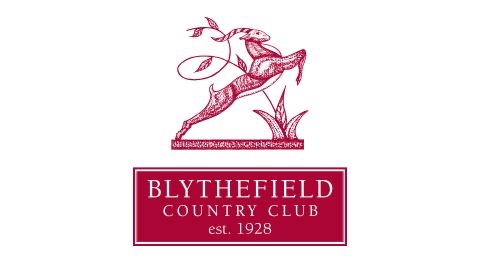 Note: This article originally appeared in the member newsletter of  Blythefield Country Club located in Belmont, MI, near Grand Rapids. It was written by long time member Brent Rector.

Like most clubs, Blythefield CC has a one-day spring stag with golf and dinner for members and our guests. It was scheduled this year for Friday, May 8, but has been cancelled as we all deal with the Coronavirus pandemic. There is a wonderful history for our spring stag. Maybe explaining this bit of Blythefield’s club history will give you a smile.

A spring stag has been a staple on the club calendar for many, many years, probably since the 1930’s. In 1978 Tim Moore, a Blythefield member back then, was chairman of the event. He and his committee in charge of the spring stag decided to have some fun with it. Rather than celebrating winners, the spring stag would give some recognition to bad golf. Thus was the “Flitcroft Spring Stag” named. It was a four-man scramble. The team with the highest score got fun prizes, like bowling balls, bowls of goldfish and golf lessons from our pro Buddy Whitten or sometimes tennis lessons instead.

Here’s the back story, for those not around back then. Blythfield’s spring stag committee named the event “in honor of” Maurice Flitcroft. According to the Guinness Book of World Records, a guy by that name held the, ahem . . . distinction of posting the highest score ever for the British Open (yes, for you purists, I know that its real name is “the Open Championship”). Flitcroft earned this, ahem . . . honor because in 1976 he shot a 121 at a qualifier in his attempt to get into the Open. The next year his 121 was included in the Guinness book, and our stag event became the Flitcroft Spring Stag.

In 1988 we found out that Maurice Flitcroft was more than a name in the record book. I know. I was part of it.

That story starts in 1987. My guest for the 1987 Flitcroft Stag was my friend Terry Moore. (Some of you may know Terry; he is Tim’s brother, and has been a golf writer and promoter in Grand Rapids for many years.) Well, Terry had a memorable round in the 1987 Flitcroft Stag, or should I say a memorable shot. On #15 he recorded his first ever hole-in-one, with a one-iron. He was ecstatic, to say the least. With the help of Terry’s ace, our team won the ’87 Flitcroft Stag. 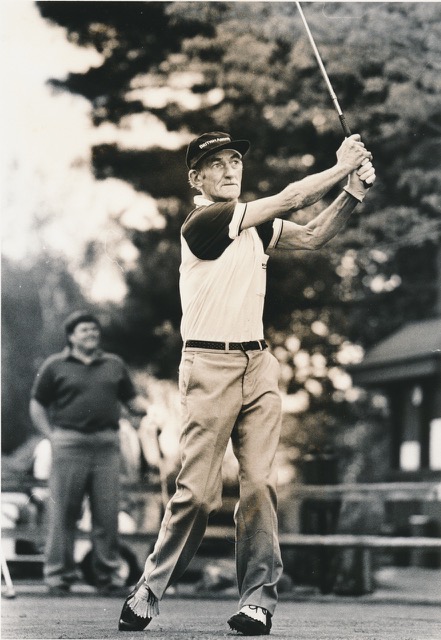 Maurice G. Flitcroft on the first tee at Blythefield

Terry was so moved that he decided to put his reporter’s hat on and find if Maurice Flitcroft really existed. Terry found him, and began corresponding with him. At the time, Flitcroft was –  get this –  an unemployed crane operator in Barrow-In-Furness, England.

Terry learned that Flitcroft did actually play in the 1976 British Open qualifier, and did shoot 121. On the entry form for the qualifier Flitcroft claimed that he was a professional golfer, even though the Open qualifier would be the first full 18-hole round in his life. (Maybe 121 is not so bad for your first round ever?) This shenanigan got him a lifetime ban from future Open qualifiers, but it wasn’t all bad. It also got him recognition in the Guinness book.

Then Terry put on his promoter’s hat, convincing British Airways to fly Flitcroft (and his wife Jean) to Michigan to be “honored” at the 1988 Flitcroft Stag. The Flitcrofts loved the idea. They came to the states, and were even comp’d for their stay at the Crown Plaza Hotel on 28th Street. That year’s event actually had a title sponsor. British Airways was “The Official Airlines of the Maurice G. Flitcroft Tournament.” What a hoot!

The story about Flitcroft coming to America was on the front page of the Grand Rapids Press, with this headline: ‘Legendary’ Flitcroft on way to Blythefield. There were several other stories in the newspapers, including the Detroit News and Free Press, the Toronto Globe & Mail, and even a British newspaper. It was also covered by the local television stations in Grand Rapids.

In the feature foursome at the 1988 Spring Stag were our honored guest, plus Greg Johnson (then a sports writer for the Grand Rapids Press), Terry and me. Here’s some photos:

Flitcroft had a jolly old time. He was a real showman with some great quips:

· Asked about whether he was nervous playing in a tournament named for him: “I don’t know what I’m more nervous about, driving off the first tee today at Blythefield or driving down the right side of 28th Street.” (Terry Moore told me that he gets credit for this one.)

· About playing at Blythefield’s spring stag: “A wonderful thing, really. Perhaps I’ll put on a good show and the Buick Open will give me an invite.”

· This one he said was from his sister-in-law, who commented when Maurice and his wife departed for their trip to the U.S.: “It’s the first time I can remember Maurice and Jean being out of the house together since their gas oven exploded.”

Just in case you doubt any of this, here’s a YouTube link for the TV coverage during Maurice’s visit to Blythefield: https://youtu.be/EwexyD0kY04

I trust this has given you a laugh right now in a difficult time for us, our country and the entire world. Let’s hope that there will be many more days of fun and laughter at Blythefield . . . and soon.

For a brief history of the club, visit Blythefield CC