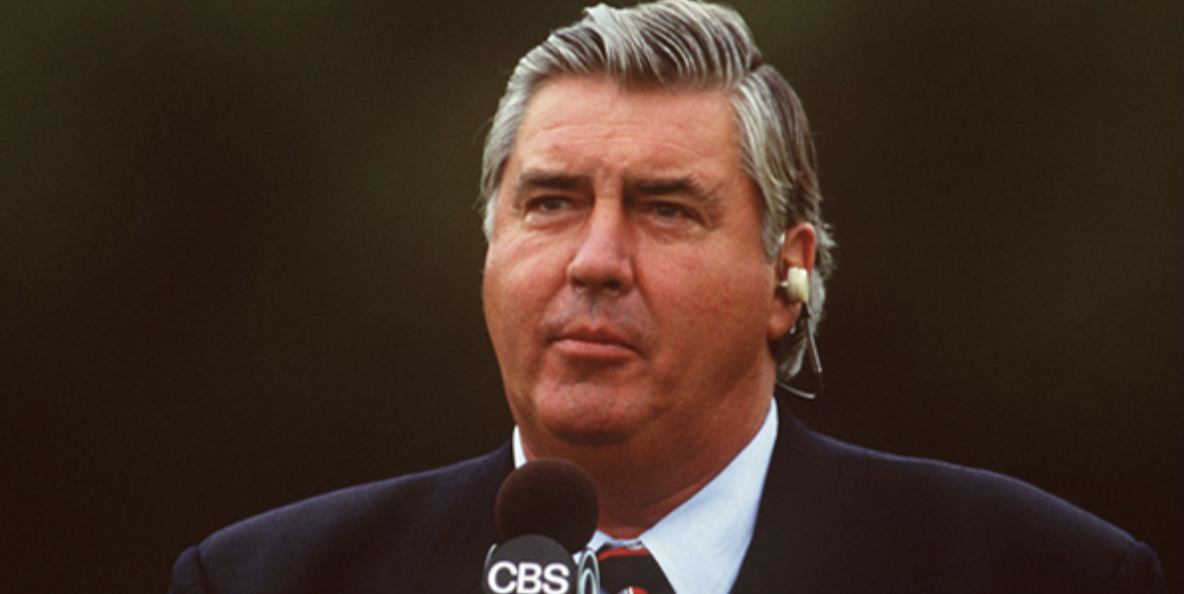 This past week I learned of the passing of Ben Wright, the former CBS golf commentator and British sports journalist.

During his run at CBS, he assumed the heavy mantle of the legendary Henry Longhurst whose pithy sayings and acute observations made him a favorite of television viewers, including me. As golf correspondent for England’s Financial Times, Wright knew the foreign players particularly well which came in handy when the Masters came around. But in truth, he did his homework about all the players. He knew the game.

Wright held court as a commentator at the 15th green at the Masters with his lively and eloquent descriptions. I was so taken with his mastery of language that for the 1983 Masters I transcribed some of my favorites and then published them in the Michigan Golfer. Here are a few:

“The sands of time have run out. Seve is watching while Watson is failing with monotonous regularity.”

“It made a quick tour of the house and went in by the back door, the trademan’s entrance.”

“He needs this little putt to stop the rot.”

“Not even that genius with his wand standing on its heel can negotiate this soggy surface.”

On Tom Watson hitting the 15th in two shots:

Just prior to a player’s climatic wedge shot to the 15th green with its lurking pond:

“The little fishies below don’t have the temerity to jump now.”

Later that summer, I contacted CBS Golf and asked to spend a day inside the production truck with Executive Producer Frank Chirkinian in order to write a story about the experience. His assistant, Chuck Will,  replied saying if I came to the Western Open in Chicago he’d make it happen.

When the Western came around at Butler National GC, I applied for credentials and was accepted. A few weeks later, I was inside the trailer for CBS Golf at the course speaking with Will. When I saw a clip of my Michigan Golfer article about Wright taped to his desk, I knew I was in friendly territory. In truth, the usually wary folks at CBS sensed I was a “fan” as much as a journalist and didn’t need to worry about me embarrassing them. I had no ax to grind, so to speak.

Although I was given the green light to be in the production truck that Saturday afternoon, my luck went awry. Darned if a massive thunderstorm didn’t wash out and cancel the airing of that third round.

However, Will and Chirkinian agreed if I came to Firestone CC in Akron for its final televised Tour event of the year,  I could have a “rain check.” That I did and I wrote a major story in the Michigan Golfer about my day “inside the truck.”

Back to Wright. I met him at Firestone and he thanked me for writing that Masters article. In the ensuing years, I would chat with him at the Buick Open and at the Masters.

My next chapter with Wright occurred in November 1989 when I invited him to be a keynote dinner speaker at the first Michigan Golf Summit which I chaired and with the impetus and sponsorship provided by Eastern Michigan University’s Continuing Ed Program led by Art McCafferty.

The Golf Summit was a huge success and Ben Wright delivered a humorous, eloquent and insightful speech to cap it off.

The next morning I drove him to the airport and on the way I handed him a check for his speech. He was quite surprised.

In fact, he said: “Terry, I’m still waiting for payment from USA Cable for my television work at September’s Ryder Cup Matches, and here you’re paying me now for last night’s speech.”

And then he added with a grin:

Wright’s distinguished career with CBS later took a wrong turn when he made some controversial remarks about lesbian players as well as female golfers’ anatomies. At that time, he was being interviewed by a female journalist for a Gannett-owned newspaper in Delaware. When he and CBS denied his remarks and started smearing the journalist, a battle ensued with a major media giant who didn’t take kindly to how one of its journalists was being treated. Gannett wasn’t going to be intimidated. Before long, Wright was fired and his career never recovered.

Many observers thought that Wright, after he admitted his wrongdoing on several occasions, should have been given an opportunity to resume his career. But the call never came.

He spent the rest of his life in Flat Rock, North Carolina, in the lovely Blue Ridge Mountains. He even designed a golf course, Cliffs Valley in South Carolina. Friends from around the country and Michigan would visit him and be entertained by his wit and storytelling. One of them was Michael Patrick Shiels, the Michigan radio host, who kept in close contact with Wright.

He did some magazine writing and also wrote a book, called “Good Bounces and Bad Lies” in 1999. Shiels helped him with it. Therein he confesses to his bad actions and poor judgement in the CBS-Gannett episode. Along with citing his career long struggle with alcohol, including a stint at the Betty Ford Clinic, Wright made peace with the Gannett reporter and ended a chapter with:

“…I offer an apology to anyone who was truly offended by my statements. I never meant to hurt anyone and never imagined it possible that as a gentleman, and a mere observer of the game of golf, I could be embroiled in such a controversy.”

One Response to “Memories of Ben Wright”