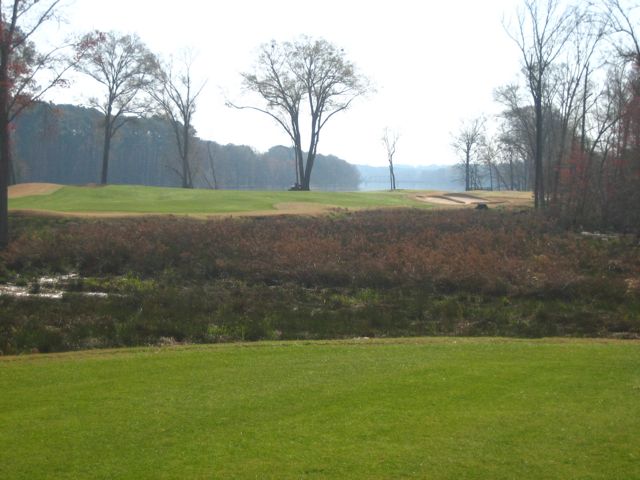 The 4th hole of Champion Retreat’s Island Course, with the Savannah River in the background.

Most golfers relish the chance to play golf courses from name brand designers. But among a small sector of architectural traditionalists (you may call them snobs), choosing between the designs of Jack Nicklaus, Arnold Palmer and Gary Player is like a wincing version of the game “Would You Rather.”

At Champions Retreat, a private club near Augusta, Georgia, the matter is no cocktail party hypothetical. Members here, about 300 of them, including a healthy percentage of national memberships, don’t have to choose just one–for better or worse they get all three, with 9-hole courses–Bluff, Island and Creek–designed by Nicklaus, Palmer and Player, respectfully.

The concept of getting all three together at one club was allegedly cooked up in the late 1990’s by one of the club’s founders, Wayne Millar, who recruited fellow South African Player to pitch the idea to Nicklaus and Palmer at a Masters champions dinner.

It’s admittedly a marketing gimmick (otherwise you’d give one architect the land and resources to build one great course, not confine three of them to three areas), but as with many gimmicks it’s one that does have a certain amount of appeal, if for no other reason than for curiosity’s sake (it doesn’t hurt that the courses sit on 1200 pristine and topographically diverse acres near the Savannah River opposite Sumter National Forest, with scant development to date). And at least they had the sense to scrap the original name, The Big Three Club.

If you had to pin down those “traditionalists,” however, my bet is that 8 or 9 out of 10 would go for the Nicklaus course. Here they’d be sorry.

The Bluff nine has by far the most interesting topography, and Team Nicklaus made almost nothing meaningful out of it. The middle holes move crudely up and down over extreme wooded slopes with semi-blind uphill approaches into 3, 4, 5 and 7. These holes are tough and muscular but fail in the imagination department–you just have to hang on and fight your way through them. Compared to the other two nines the Bluff feels narrow, out-of-scale and unfinished. There’s one standout hole–the long par-3 8th cutting across a wild depression–but it hardly emphasizes the rolling topography. 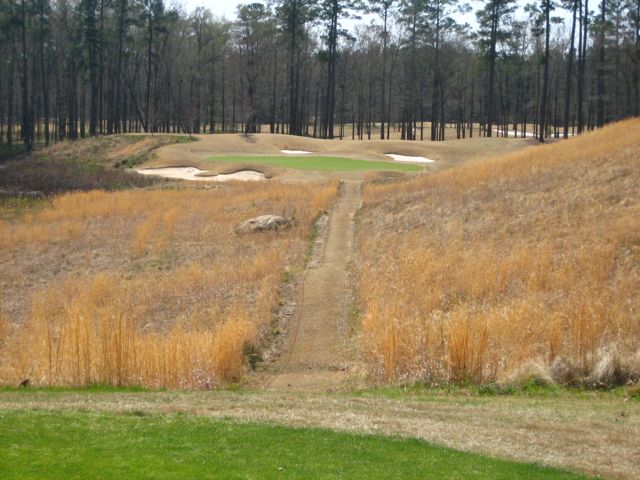 The Bluff’s long par-3 8th (this from the middle tee) is the course’s most interesting.

Palmer wins the game at Champions Retreat. His company’s Island course (lead designer, Harrison Minchew) is wide, voluptuous and sexy. The middle of the course drops down into a low region on Germain Island with two holes running along the slow Savannah River plus four more up against the Little River on the inside bank.

There’s a lot of shaping in the ground that bubbles up into the large greenside features, but it feels luxurious rather than artificial. In fact, the ethereal setting of the isolated woods calls for something moving and evocative, and the enormous size of the bunkers, out of sync at a place like Lost Key, work better in this more spacious environment. 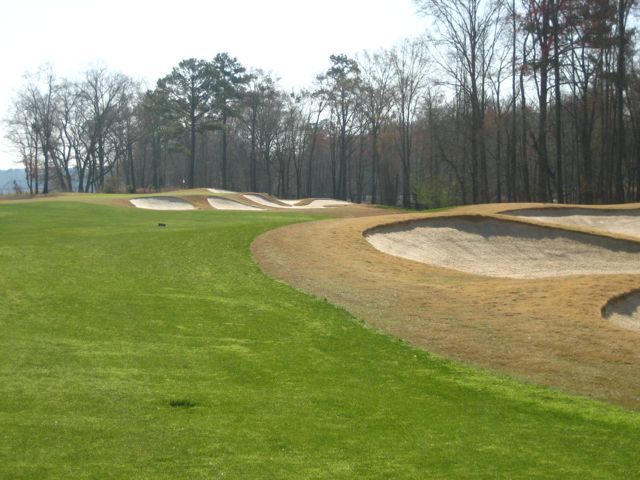 The ground movement, flashed bunker faces and clean edges give the Island course a sophisticated appeal.

Player’s Creek nine is the most ordinary, as in it looks and plays like any number of courses in north Georgia, and in a good way. It begins amid the river wetlands but picks up at the par-5 5th with a split fairway near the green slightly reminiscent of the 11th at TPC Sawgrass san the hallmark bunkering.

Like the Island nine the fairways are generous and the course is peppered with busy cape-and-bay style bunkers. The closing holes travel some interesting upland terrain and include several nicely contoured greens, but the cliché 18th around a lake a lá Bay Hill 18 is a disappointment. Maybe Player was trying to tribute his friend. 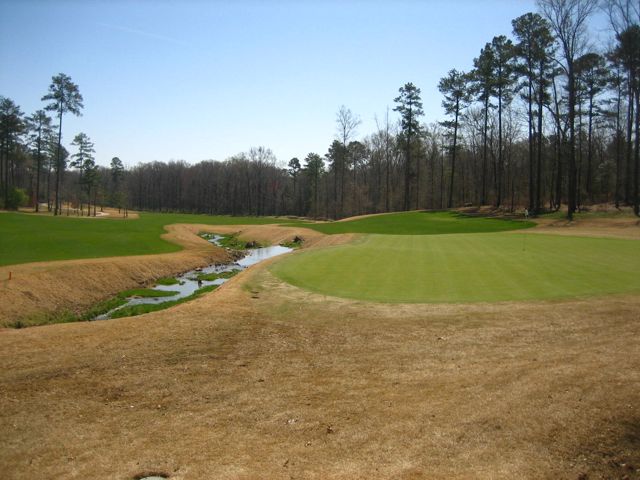 Looking back at the split fairway of the Creek’s par-5 5th hole.

One interesting note is that all three courses feature a short and potentially drivable par-4: the Creek’s 315 to 349 slightly downhill 7th; the Island’s 272 to 328-yard 7th with a narrow kick-slope between two bunkers short of the green; and the strange, downhill 309 to 340-yard 6th at the Bluff with its green tucked behind a creek, reminiscent of The Belfry’s 10th hole featured in recent Ryder Cups.

Last thought: If you strive to be nationally regarded private club anywhere near Augusta, you’d better deliver outstanding conditions, at the least. Champions Retreat does, and the superior surfaces and gorgeous, unspoiled property go a long way toward overcoming for any design biases, peeves or senses of missed opportunity. (90) 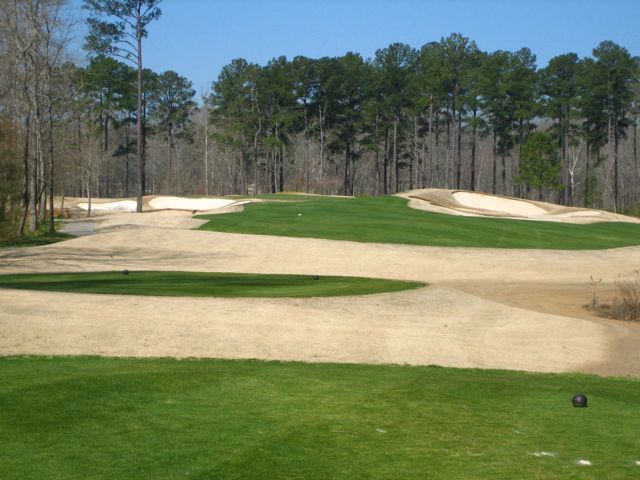 Tee shots that get past the right bunker at the Island’s 7th will kick forward toward the green.

2 Responses to “Nicklaus, Palmer and Player, Oh My! Champions Retreat”