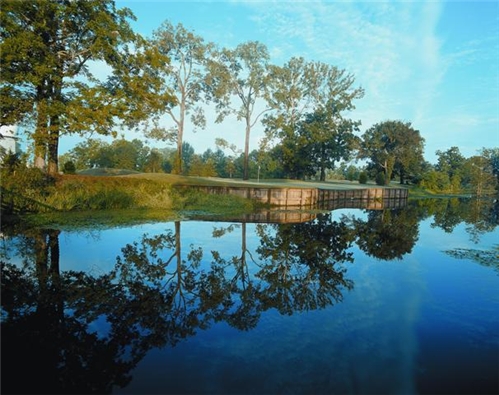 The par 4 11th, with its bulkheaded green across a pond, is but one of the many faces of Oak Wing.

I can imagine Jim Lipe, who occasionally steps away from the Nicklaus studio to take on solo projects, taking one look at the Oak Wing site, shaking his head and sighing, ‘ Okay, let’s see what we can do.’

There was already too much going on with the land here for it to ever be a great golf course. The golf property is located on England Air Force Base and shares space with Alexandria’s airport and a water treatment facility. The holes cover several disconnected parcels that used to be used for, in no particular order, on-base housing (where two holes and a retention pond now exist), ball fields and a track, a rudimentary nine-hole course, and undeveloped sections of meadow and wetlands.

The setting is a 3 but the design is a solid 6 or 7. To Lipe’s credit he took the unrelated pieces and strung together groupings of holes that show a broad range of looks and strategies, including several holes that grab your attention. The result is a lack of cohesive narrative as you move from one chapter to the next, but the action on the ground is engaging and even slightly daring at times. The shaping of the greens, and their orientation to nearby hazards, can be particularly good — check out the silky green contour at holes like 9, 10, 14 and 16.

It’s also nice to see holes like the 5th—a smart, sub-333-yard par four that weaves through a gauntlet of fairway bunkers—on such an otherwise modest course. Late in the round there’s a British–style romp through an open field near the airport runways that includes a cool pair of spectacle bunkers 75 yards short of the wonderful par five 14th. That’s followed by a huge par four coming back the other direction that uses a burn-like drainage canal as an all-or-nothing diagonal carry hazard dividing two halves of the fairway. (86)