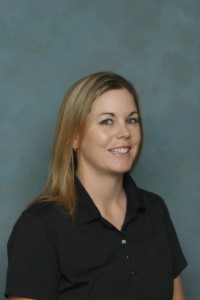 Annie Mallory of the Core Golf Academy is helping me learn a better swing, and how to learn. The latter is the hardest part.

In addition to Performance Coach Paul Dewland, who is helping me with the mental side of the game, I’ve started taking lessons with Annie Mallory, an instructor with the Core Golf Academy. I’ve known Annie for years through my communications work with Core, and that she’s a great coach, a former contestant on The Big Break, and lots of fun. Now, I have mind and swing coaches.  Golly, I’m building my own entourage.

“You’re Flippy McFlipperson,” Instructor Annie Mallory says with a laugh in describing how I’m flailing away at The Academy at Piper’s Heath Golf Club in Milton, Ontario.
“I know Flippy because I used to swing like that too.”

The official diagnosis is that my hands tend to get caught behind me. Coming into impact, I lose the hinge in my right wrist, which should be bent back like a waiter holding a tray, and my hands flips forward.

“That’s why you’re digging a hole for a pool,” she said, pointing to the ugly scar I’ve inflicted on the range.

It was my first lesson with Annie after concluding I couldn’t right this ship on my own. Maybe Bubba Watson doesn’t need help, but I do. I’ve preached for years that to genuinely improve, a golfer needs coaching. Typically, I didn’t listen to my own bluster.

I’ve written and edited hundreds of instruction articles over the course of about 20 years, which has contributed to my delusion that I could fix my own swing.

And I’m a typical golf lemming. I’ve consumed tonnes of golf books, I read every article in Golf Digest, I carouse through YouTube looking for beautiful golf swings, and I engage in earnest discussions in bars, kitchens and on tee boxes about things like swing plane and low point (but only with willing participants, so don’t run if you see me coming your way.)

But if Tiger and Phil the Thrill need another set of eyes to keep them on track, well duh, it makes sense that I need it too.  But it took until I was hitting in practically sideways until I asked for help.

What’s with that? Well, I HATE asking for help. It’s admitting that I can’t do something on my own. And like many guys, I don’t want to take direction from someone else. Then I become subservient to that person. And when I’m agitated, my head spins with my own internal bickering, and I don’t listen very well.

Actually, this doesn’t make me much different than most anyone else, according to performance coach Paul Dewland.

“The ego hates change. It makes the ego feel vulnerable,” he says. (I believe this statement hits upon a wider truth if you insert ‘male’ before ego.)

“This vulnerability indicates that the ego has lost some sense of control of the ship, and it hates that. It would rather go to the clubhouse after the round and complain about our crappy swing to our buddies.

“The true golfer in us loves to feel uncomfortable, because it finally gets to learn to play correctly, rather than take a back seat to the ego’s indulgences. The golfer within sees the long-term benefits of making changes, and that performance will suffer for a while.

“If you’re uncomfortable, it means you’re changing. But the false golfer—the ego—hates feeling uncomfortable and the temporary dip in performance that comes with swing changes.

“To avoid this, it makes excuses to stay the same: justifying, blaming and denying against the need to change. That’s despite maintaining the same handicap and making the same errors, all of which is more fodder for the clubhouse whining festival.

“Sadly, most golfers choose comfort over successful change. We bow down to an uncomfortable little feeling in our gut rather than focus on the new behaviour and its benefits. This is why most of us don’t do what we know we need to do, whether it’s diet changes, exercising, or improving our golf swing. We tend to do what we feel like, not what works.”

Well, my ego finally had enough shanks, brutal scores and getting beat by my 16-year-old son Corey.

One evening I was hitting balls all over the map at Piper’s Heath. I was so dangerous that I took the furthest right spot on the range. I was reeling with frustration and feeling this close to turning my 7-iron into a helicopter. While taking a breather, I saw that Annie was between lessons. I hummed and hawed for five minutes before I finally walked over and croaked, “Ah, Miss Annie”—which I’ve always called her—“can you take a look?”

After we had booked a lesson, I wondered why I hadn’t asked Annie to work with me sooner. The guys in the Core Golf Academy, including Sean Foley and Tom Jackson, rave about her as a teacher, and both agree she’ll soon be one of the top coaches on the LPGA Tour. Annie is from New Brunswick, so she’s got that Maritime friendliness, she doesn’t sugar coat, and laughs a lot.

But she knows the golf swing, and she can swing it herself. When she hits a ball to demonstrate proper hand action, the iron hits the turf with a satisfying thump and the ball penetrates the sky with zip.

I’ll spare you the minutia of our lesson, but her main objective is to teach me proper impact position with my hands well ahead of the ball, my arms straight, and my left hip forward and rotating.

Listening to her explain and demonstrate was easy. Doing the drill she gave me—hitting a wedge with about 70 per cent effort with a half-swing–was maddeningly difficult.  I felt incredibly incompetent that I couldn’t make this change easily, and thought ‘Shite, if I can’t nail this by the next lesson…’

Since my lesson, I’m doing my homework: working on my drill on a range whenever I can, and in my basement most mornings, but it still takes a lot of focus to pull it off. And I’m supposed to do about 10 repetitions without a ball for every ball I actually hit.

Pointing to about 15 balls, she said: “It should take you about 20 minutes to work through this many balls. You’ve got to set up the right pattern in your brain so that you master this. You’ve got to myelinate,” she says, referring to a substance in the brain called myelin discussed in the popular book, The Talent Code by Daniel Coyne. (We’ll plunge into myelin in another blog.)

Making swings on a range without hitting a ball is even harder than trying to hit the ball correctly. I just want to scrape ball after ball and hit the damn things.

This gives me new insight into one of Red Green’s maxims: “”I’m a man… but I can change… if I have to… I guess.”