It’s rather ironic that the problem with Muskoka—from a golf perspective—has become one of its greatest attributes. 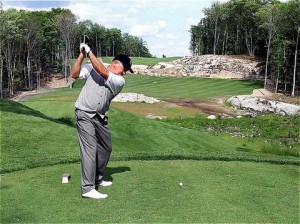 The rock of Muskoka has long been the region’s signature. The craggy outcroppings are ruggedly beautiful, dramatically shaped, and spackled with pinks and blues.

While Muskoka has long been a worldwide tourist region, golf wasn’t a part of the picture, unlike vacation areas such as Northern Michigan or New York state. It was believed the ubiquitous rock made it too expensive and difficult to build golf courses.

But developers and designers figured out how to make rock and golf work together. In fact, Muskoka has become a North American golf destination that offers world-class quality courses. And no region in the world blends flowing fairways of green with towering trees, vast lakes and granite.

“The use of the rock is totally innovative—a strategic and aesthetic element that shows off the beauty of the Canadian Shield,” says Toronto golf architect Tom McBroom who played a leading role in the development of Muskoka golf.

The first premium resort course in Muskoka was Deerhurst Highlands in 1988 in Huntsville. The team of McBroom and U.S. designer Bob Cupp incorporated vertical rock faces into the course, especially on No. 10, which features a 100-foot wall that runs up the right side of the fairway.

The rock does not encroach on the playing areas of Deerhurst, which entertainingly careers across rollicking terrain, through some gentle valleys and even a unique breakout of three links-style holes.

“Deerhurst was the first hi-tech, modern course with a quintessential Canadian look,” said McBroom, who updated Deerhurst’s original Lakeside course. Although short at only 4,712 yards with one par five, it’s a solid course.

McBroom continued to experiment with rock at The Lake Joseph Club in 1995 near Port Carling. Rock frames a number of holes such as the par-3 No. 8 where a granite wall looms behind the green. Most of the rock is between the tees and fairways, providing a dramatic look. (From the back tees, there’s lots of rock to carry, but little from the forward tees.)

A nice balance of fairness and difficultly, Lake Joseph slices through thick woods and bobs across wickedly undulating terrain that provides spectacular scenery and variety.

ClubLink Corporation, which owns the course, and other golf industry folks realized that golf could work in Muskoka when The Lake Joseph Club was named Best New Canadian Course by Golf Digest and SCOREGolf in 1997 and 1998 respectively.

Lake Joe was such a hit that ClubLink and McBroom pushed the rock experiment further with Rocky Crest which opened in 2000. McBroom took the design risks, but ClubLink took financial risks. At least 550,000 tonnes of sand were trucked in.  You can’t grow grass in rock.

At Rocky Crest, McBroom exposed rock throughout the entire course—along the turns of doglegs and around greens. No. 6 is one of the world’s most unique holes; from the back tees, a golfer must carry three acres of rock to the fairway 180 yards away.

Surprisingly for Muskoka, the topography is relatively gentle and Rocky Crest is lovely walk. With its seamless blend of holes and spectacular log-cabin-style clubhouse, Rocky Crest was ranked Ontario’s No. 1 resort course by Ontario Golf magazine.

When ClubLink retained 1998 Masters and British Open champion Mark O’Meara to design a new course in Huntsville, he said the use of rock was a novel evolution in golf design that he wanted push forward.

The Mark O’Meara Course at Grandview Golf Club in Huntsville, which opened in 2001, brings rock more into the playing areas of course, notably on the short par 4 No.8 where three rock knobs split the fairway in half. With its forced carries and steep slopes, it’s imperative that you play correct tees to enjoy the O’Meara Course which sprawls across spectacularly rugged terrain.

The Inn Course across Highway 60 at Delta Grandview Resort is a 9-hole executive course that delivers all the features of a championship course in a smaller package.

In comparison, Bigwin Island Golf Club designed by respected Toronto architect Doug Carrick is a gentler course on more rolling terrain. A scenic boat ride takes you to Bigwin Island, the site of a luxury resort in the 1920s and ’30s that attracted the rich and famous to the region, including the Rockefellers, Clarke Gable and wife Carole Lombard.

With its views of Lake of Bays, thick forests and elevated tees, Bigwin is gorgeous and enjoyable for all levels of golfers. The wide fairways provide room for sprayed shots, but better players will find all the challenge they wish. Golf Digest ranked Bigwin Island as Best New Course in Canada in 2002.  Muskoka golf was getting hot.

Although architect Ron Garl hails from pancake-flat Florida, he took full advantage of the tumbling terrain and the rock at Taboo to design a wonderfully engaging course that opened in 2002. Taboo plays through wooded valleys, weaves through shoulders of rock, and over lovely beaver meadows.

Taboo is an especially strong course for the variety of holes and the medley of shots it challenges you to play. No. 18 may be Muskoka’s most dramatic closing hole, zigzagging down through rock outcroppings and back up to the green. Taboo Resort also offers The Sands, a nice nine-hole course.

As the name would suggest, rock is featured prominently through The Rock, the first design in Canada by Nick Faldo, the three-time winner of each the British Open and the Masters. The course provides gorgeous views of Lake Rosseau near Port Carling, and the looks from the tees are exciting too. The Rock is quite a challenge, playing through corridors of trees and over cascading fairways.

Huntsville Downs Golf & Country Club is a traditional Muskoka course—the original nine dates to 1925—that traverses through dense pine and features water on half the holes.

Another old-time course is South Muskoka Curling and Golf Club, which was designed by Robbie Robinson. The serpentine fairways call for precision shot-making through the tall trees to undulating greens that are well protected by treacherous bunkers.

Muskoka Highlands Golf Course is unique for its open Scottish links-style look, which brings the wind into play on most shots, but generally allows you to find errant shots.

Like Bigwin Island, you arrive at Windermere Golf Club by boat. This 18-hole layout provides a nice balance of challenge and forgiveness to interest the better player and allows less-skilled golfers to have a good time.

Highly regarded North Granite Ridge is a modern course—it expanded to 18 holes in 2002—with massive pine forests, hummocks and hollows, and a spectacular granite wall that lines No. 8 fairway.

Muskoka also offers a strong collection of excellent 9-hole courses, including Diamond in the Ruff, a quality layout known for immaculate conditioning with plenty of variety, elevation change and true greens.

Other notable 9-hole courses include Bracebridge Golf Club, which is ideal for families, Kirrie Glen Golf Course featuring spectacular scenery, and Beaver Dam Golf Club and Cottages, which is fairly short at 1,816 yards but beautiful.

As you can see, golfers living in—or traveling to—Muskoka are no longer stuck between a rock and a hard place.