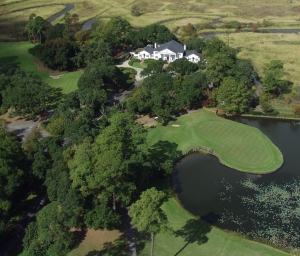 Designed by Dan Maples, The Heritage Club is a relatively new Myrtle Beach course but 300-year-old oaks provide a mature and serene atmosphere.

At 52, I’m a geezer to my teenagers. I prefer to think that with age comes wisdom and perspective.

Well, one out of two isn’t bad. We’ll go with perspective.

During a recent visit to Myrtle Beach it struck me that my first trip here was—yikes!—20 years ago to the annual Golf Writers Association of America clambake, a boys-style-get-away with golf, a tournament, receptions with great local seafood and southern BBQ, and plenty of “celebratory libations,” as one of the local writers put it. For seven years, I traveled to Myrtle Beach for the clambake, and I’ve made numerous other visits.

With more than 100 golf courses spread over about 60 miles known as the Grand Strand, Myrtle Beach had a reputation among golfers as a fabulous southern golf destination with tremendous value.But in spring and fall, aside from golf, Myrtle Beach didn’t appear to offer much else to do (especially on rainy days), exceptional dining was the exception, and most accommodations and shopping seemed average. Getting there wasn’t easy either: from Ontario or Quebec you either drove 14-15 hours, or you spent the day on a series of connecting flights.

Well, in the intervening 20 years since my first trip, Myrtle Beach has evolved into a golf destination that delivers something for everyone, including four-star hotels, marquee-designer courses (including names such as Fazio, Norman and Dye). There’s sophisticated dining, shopping and entertainment such as the House of Blues and Hard Rock Café nightclubs, the Marsh Walk restaurant row, the Carolina Opry, and amusements such as the Nascar SpeedPark and Ripley’s Believe or Not.

On a recent trip hosted by Myrtle Beach Golf Holiday, a marketing and booking collective of of our group opined: “This isn’t your dad’s Myrtle Beach.”

Now, it’s even easier to get there. Our group flew out of Niagara Falls International Airport in Niagara Falls, N.Y., on Direct Air. With Direct Air, you can–wait for it–fly direct from Plattsburgh, N.Y., which is close to Ottawa and Montreal, and from Niagara Falls, NY, which is great for golfers in Southern Ontario.

After flying down the QEW highway, you get U.S. Customs out of the way at the border, and the airport is only 10 minutes away. It’s a tiny airport and parking is free, a first in my experience. (Small airports are such a joy.)

In late February a minor miracle will occur: golfers can fly direct to Myrtle Beach from downtown Toronto. Porter Airlines begins direct, non-stop flights from Toronto’s island airport from February 28 to May 30 with departures on Thursdays and Sundays. Next thing you know, the Leafs will have a decent starting goaltender and an all-star defenceman.

In Myrtle Beach, our group stayed at the swank Marina Inn at Grand Dunes, which features marble countertops, spacious rooms, and fabulous service. The Marina Inn is a good HQ because it’s fairly central. It also features two courses, which are both on wildly undulating terrain that is unique for the region.

Our first game was at the north end of Myrtle Beach at Glen Dornoch Waterway Golf Links, most of which winds through 80-100 foot pines. As the name suggests, there are links-style elements to the Clyde Johnston-designed course, including some massive dune-like bunkering. Glen Dornoch builds to a climax with three testy finishing holes, including the par-three, 212-yard 17th which is mostly carry with marsh left and pot-style bunkers right.

At the opposite end of the Strand is The Heritage Club, ranked No. 46 by Golf Digest on its latest ranking of America’s 100 Greatest Public Golf Courses. Designed by Dan Maples, Heritage is big and beautiful with classic parkland features, notably majestic oak trees, some draped with Spanish moss, and enormous greens with sweeping slopes. The knock on Myrtle Beach courses used to be that many holes seemed like another dogleg through the pines, but every hole at Heritage has great character.

While most Myrtle Beach courses are spread fairly close to Highway 17 and bypass 17, which parallel the Atlantic, The Legends 54-hole resort is a short drive inland up Highway 501. We played The Moorland Course designed by P.B. Dye, which is broad with links features such as wood planks in bunkers, double fairways and elevated greens, some of which were enormous. As a resort, you could set up operations at The Legends, and even attend The Classic Swing Golf School, ranked by GOLF Magazine as one the top 25 golf schools in America.

Our last stop was True Blue at the south end. I had played True Blue’s sister club, Caledonia Golf and Fishing Club before, and I thought it was amazing with its grand entrance way though a canopy of trees, but True Blue really wowed me.

Both are designed by the late Mike Strantz, famous for Tobacco Road in North Carolina. Caledonia and True Blue are ranked 86 and 87 respectively by Golf Digest in its ranking of top 100 public courses in the U.S.

Strantz was an incredibly creative architect who conjured exciting golf holes that are inviting, captivating and very playable. True Blue has a lot going on, but it all seems to work into a seamless hole. He weaved multi-shaped waste bunkers sprinkled with love grass throughout the course that add eye candy and make it easy to scoot around in carts, rather than being restricted to a single cart path. I love how he runs bunkers into water.

The finishing holes at True Blue are amazing. On the 18th tee, you face a giant pond flanking the left side and the blue, wooden clubhouse behind the green. Due to a tall bunker wall bordering the pond, you cannot see much of the fairway that turns left, so it’s a semi-blind tee shot and a touch scary.

The new Myrtle Beach offers golf for every budget, and it also offers dining that ranges from down-home southern to high end.

Just five minutes from True Blue is Frank’s Outback, an eclectic place; we sat in a part of the restaurant made with canvas. Heaters like you find in hockey arenas hang from the ceiling keep you warm. The wonderful food ranges from seafood to steak, equally perfect for two or a gangsome of guys.

Among the relative newcomers among Myrtle Beach’s strong team of eateries are Greg Norman’s Australian Grille, an elegant steak house with a lengthy wine list and comfy arms chairs, and Rioz Brazilian Steakhouse, where servers bring 13 different kinds of steak, pork and lamb on giant skewers right to your table, and then cut off pieces that you select with massive knives.

For southern hospitality and seafood that is part of the Myrtle Beach’s heritage, we enjoyed an incredible meal at Sea Captain’s House. I had my first meal at this beach-front eatery in 1989. Twenty years later, it delivered everything that I had remembered so fondly about my first visit to Myrtle Beach.

TheAPosition is a big fan of myrtle beach golf courses.