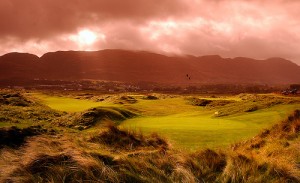 Like most links in Northern Ireland, Portsalon has an unadorned beauty, wildness and captivating simplicity that burns into the memory.

Most golfers in North America are infected. It’s not a virus of any kind. It’s a state of mind that has come from watching tournament golf on TV for years and playing on this side of the pond almost exclusively.

It’s called Augusta Syndrome, named after the home of the annual Masters tournament where every blade of grass appears cut to perfection and the water hazards are an unworldly blue.

Although Augusta National is only partially to blame, North American golfers have come to expect that decent golf courses have “lush” fairways, carts outfitted with GPS and coolers, and the clubhouses are larger than the West Edmonton Mall. We Canadians are every bit as affected as Americans.

There is a cure, however, for Augusta Syndrome: Take a golf trip to Northern Ireland.

The courses and conditions appear almost wild by comparison. The contrast is striking, and the payoff is an incredible experience into a minimalist world of golf on some of the greatest links courses in the world.

With a name like Timothy Joseph O’Connor, I am biased, of course. Counting a trip last fall to Northern Ireland, I’ve visited the Emerald Isle eight times.

On my last trip, we flew on a red eye from Toronto to Belfast. After gathering our luggage and clubs at the airport carousel, we were met by Bertie Curtin, our driver for the week. A massive man and former rugby player, Bertie kept the wise cracks going while pretending to be exasperated with a bunch of fumbling, groggy Canadians.

For those who could stay awake, the journey to our first destination provided a lovely introduction to the pastoral beauty of Northern Ireland. A good part of the attraction of golf in Ireland is looking out the window at the lovely view. The hills in the rolling countryside are carved into neat squares by rock fences, the rivers and creeks are clear, and the wild grass is emerald green and thick. There appear as many sheep as people in Northern Ireland.

Following our bus journey from Belfast, we arrived at the Rosapenna Hotel and Golf Resort near the town of Downings, the majority of us wisely trundled out to the adjacent Sandy Hills Course, which climbs, dips and rolls over rambunctious terrain. Most every hole is defined by great mounds of tangled, ball-gobbling blonde fescue grass that comes up to your knees in spots.

There’s an uncontrived harmony to Sandy Hills and most links courses in Northern Ireland. There are no false notes in the shaping of the course, no extraneous gardens and certainly no beverage carts. Sandy Hills looked so natural that after the round, our group guessed that the course could date to the early 1900s. Wrong! It was designed by Pat Ruddy, one of Ireland’s greatest contemporary golf architects, in 2003.

Our next course was indeed as old as it looked. The Old Tom Morris Course, which is also next door to the Rosapenna Hotel, opened in 1891. Fashioned by Morris, the grand old man of Scottish golf, most holes on the front nine are fairly flat and simple, strung straight together end-to-end through a shallow valley. The Morris Course appears very basic, but it has a lovely natural charm that appears common to most of the older links in Northern Ireland. Many of the flags were faded, some tattered, but no one cared.

Along the high points of the back nine, I find myself drinking in the view of modest, mostly white homes staggered along a broad hillside leading down to a tranquil bay. It’s a common site in Northern Ireland and a reminder that there’s so much more to golf than chasing the little white ball.

Only a short drive away is Portsalon Golf Club, where we were greeted in a spartan shop that sold not much more than a couple of sweaters, some chocolate bars, balls and little else. It spoke volumes of the generally unpretentious nature of the golf in Northern Ireland, where appearances are vastly secondary to just playing the game.

Orginally opened in 1891 but refurbished by Pat Ruddy, Portsalon sprawls out between the gorgeous Knockalla Mountains and Lough Swilly, a massive saltwater bay. The vista from the second tee is beautiful, providing a view of the entire course and the town of Donegal.

On the front, the holes meander through fescue-entangled dunes, appearing tighter than they really are. Like many Irish links, the greens at Portsalon do not resemble the elevated and well-bunkered complexes that we are used to in North America. Instead, it often appears that they just cut the grass very short at the end of a fairway and stuck a hole in the ground.

The open green fronts allow you to run the ball into most greens, and mis-hit approaches often end up on the putting surface. It’s common to use a putter up to 20 yards off the green in Ireland because the grass is so short and wiry. Again, this makes it easier for the average golfer to get the ball close to the hole from off the green.

In contrast to the humble charms of Portsalon, Ballyliffin is a modern facility with a grand clubhouse and two courses designed by Nick Faldo with Ruddy and fellow Irish designer Tom Craddock. Ballyliffin maintains the attractive subtleness of an old Irish links where the ground dictates the game, but it accentuates features such as riveted (sod-wall) bunkers, elevated tees and greens with plenty of character.

Ballyliffin appears within walking distance of the attractive Ballyliffin Hotel. Although one sees only the occasional “buggy” (power cart), Ballyliffin like all Irish links is a lovely walk because the ground is generally rolling, and the greens and tees are in close proximity. We played on a sunny day and thus we enjoyed the full measure of the beauty of the place, including the blonde fescue waving in the wind, the hills dotted with modest homes, and the handsome ruggedness of the course.

While our first four courses were on generally rolling ground, Portstewart founded in 1894 is far more dramatic as you hit into deep valleys, walk underneath towering shoulders and traverse steep hillsides. The tone is set for the day with the spectacular opening tee shot about 100 feet down into the fairway that bends right.

The wind comes hard off the ocean to Portstewart, requiring plenty of half and three-quarter shots to keep the ball down so the wind and heaving contours don’t send your ball careering into the fescue or gorse. Another appealing feature of Irish golf is the challenge of dealing with the wind. Many holes appear wide and relatively free of hazards—there are no trees, ponds and few fairway bunkers—but you must control your ball flight to score well.

After a great lunch of soup, sandwiches and beer—the standard Northern Ireland après golf fare, which is perfect for its quickness, taste and unpretentiousness—we set off for one of the highlights of the trip: The Slieve Donard Resort and Spa in Newcastle. Framed by the Mountains of Mourne, the Slieve Donard ranks among one of Europe’s finest hotels, especially after a recent £15 development and renovation. The rooms are swank, sharply outfitted with striking amenities, the giant dining room has a regal atmosphere, and the spa is gleaming.

Next door is one of the greatest courses—links or otherwise—in the world: Royal County Down. Right up against the Irish Sea, Royal County Down tumbles over cascading dunes and rolling fairways; it is at once beautiful and intimidating. Every hole has its own unique character and set of challenges. Arguably, Royal County Down has some of the most interesting greens in the world; some set in little amphitheatres, in bowls or placed at angles from the fairway. Royal County Down is spectacular and it can very difficult with forced carries over fescue chasms, many blind shots off tees and gorse bushes where poorly hit golf balls disappear forever.

We finished off our trip at Ardglass Golf Club, which features a clubhouse dating to 1496. Ardglass resembles more of a parkland course with rolling terrain and plenty of fairway bunkering, but about half of the course runs right against the ocean. On some holes, you must hit over a beach to the fairway, the only course on our trip with such a distinction.

Six rounds in six days were enough and we opted to spend our last full day in Belfast, the city synonymous with the era known as “The Troubles,” when Roman Catholics and Protestants were at war. Fortunately, after decades of turmoil, peace has come to Northern Ireland in recent years.

On a beautiful Saturday afternoon, the downtown was bustling with shoppers in hundreds of modern and cosmopolitan shops, restaurants and bars. Most every shop appeared packed with customers eager to spend Euros earned in the booming, post-Troubles economy.

For a Canadian golfer with Irish roots, it was heartening to see the folks of Northern Ireland enjoying peace and prosperity, and it was an absolute pleasure to savour the unadorned beauty of the country`s incredible links.