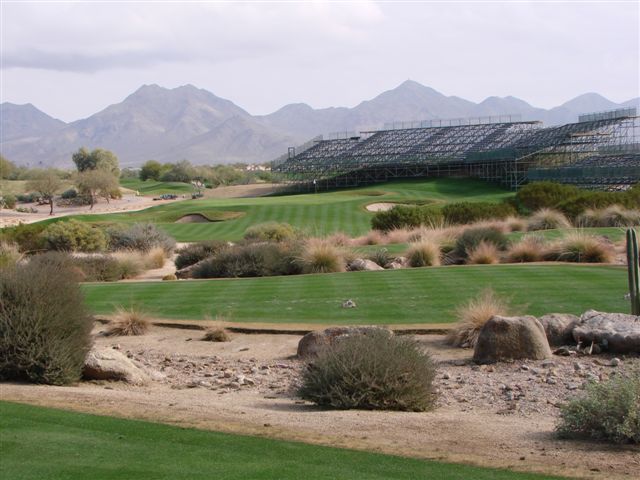 [Dec. 2, 2011]— I had a great day playing the TPC Scottsdale Stadium Course this morning. Not because I was playing well, because I wasn’t. I chalk it up entirely to a lack of sleep and my aching back, with nothing left over for an inherent lack of skill.

We also enjoyed the company of forecaddie Bryan Fischer, who’s a plus-four handicap, and who will be taking a run at qualifying for the Waste Management Phoenix Open, which begins here on February 2. Construction is already well underway on the stands that surround the famous, or infamous sixteenth hole, here introduced by Stuart:

If proof is needed that the west can still be pretty wild, the tournament supplies plenty each year. More fans attend this early event in the PGA Tour season than any other golf tournament, and by late Sunday afternoon, about the time the networks tune in, there’s a good chance many will be wired. The raucous cheering that attends shots at the sixteenth is as rowdy as any NFL game, and reached its extended epitome in 1997 when Tiger Woods aced the hole. To say the crowd went wild is to use a vastly understated cliché.

The Stadium Course comes by its name honestly; aside from temporary bleacher seating, there are raised mounds around many of the greens where fans can pack in to watch the action, and there’s usually plenty, particularly on the closing holes.

I not only played the course on my first golf visit to Scottsdale almost exactly ten years ago, taking part in an International Media Golf Shoot Out, it was my introduction to desert golf. Although, as my partner that day, John Davis of the Arizona Republic, said, “This isn’t true desert golf. The desert areas here are more cosmetic than treacherous. Wait until you play Troon North.”

I parred the sixteenth that day, and so I was hoping not to mess up my career stats when I stepped to the tee today:

I promptly put it on the putting surface with a nine iron, rammed my first putt about eight feet past the hole, and sunk the comebacker. I’m even through two rounds on sixteen, ten years apart.

My first look at the TPC Course startled me with what looked like tiny stripes of vivid green fairways, with bleached out wilderness areas beckoning from just beyond the rough.  Certainly, it’s a sound idea to keep the ball in the fairway at this Tom Weiskopf-Jay Morrish design, built in 1986.  But it isn’t that tough to find the ball in the arid waste areas, just tough on the irons when playing out.

The breadth of the mountain vistas (the McDowell range) in the Sonoran Desert setting makes the visual aspect of play more deceiving than firing through the wooded corridors I’m used to in the northeast. But once off the tee, it’s easy to see that the fairways are actually fairly generous.

The seventeenth hole has had its share of excitement as well. But let’s let Bryan explain:

The other player Bryan mentioned was Tom Byrum. Magee teed off while the previous foursome was still putting.  His ball rolled onto the green, bounced off Tom Byrum’s putter, and into the hole for a double-eagle one on the scorecard.

His shot of the year was matched by the quote of the year from Byrum’s caddie, Robert Uresti, who quipped, “It was the first putt Tom made all day.”