Two teammates, Hal Quinn and Steve Eubanks arrived last night, and we played a practice round this morning on the Kintyre course, and another in the afternoon–with later arriving teammate and our captain, Tom Mackin–on the Arran course.

The day sadly revealed that if the team had to rely on my apparent skills, we could all go home now.

There are higher hopes for next year’s 138th Open Championship, the fourth that will be held at Turnberry (on the Ailsa Course). Each of the previous three were considered thrillers, particularly the first. 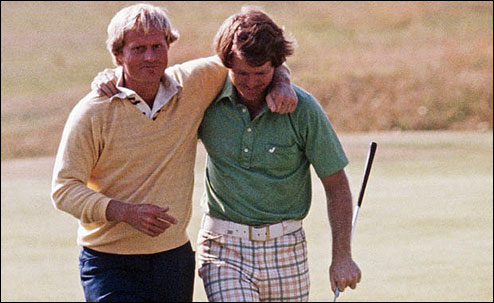 After the Duel in the Sun

The 1977 Open Championship has legendarily become known as The Duel in the Sun, thanks in part to the largely benign weather conditions, but more due to the epic battle between Tom Watson and Jack Nicklaus, the match played like a twenty-round boxing match, each man refusing to stay down. Indeed, the tournament came down to the last shot, with Watson prevailing by a stroke and setting an Open record for the lowest aggregate score, 268.

The golfing prowess of the pair was such that the third place player, Hubie Green, was ten strokes back of Nicklaus, causing him to utter the immortal line, “I won the tournament I played. They were playing in something else.” 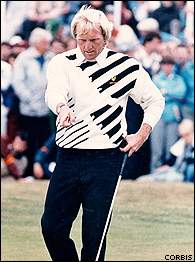 Competitors in 1986 must have thought they were playing a different course from 1977. The balmy weather conditions then were replaced by a cold and raging wind in the first round. One player, Ian Woosnam, shot an even par 70. The other 152 players finished the day 1,251 stokes over.

Alistair Nicol, whom I’m playing against tomorrow, wrote about the 1986 Open thusly: “When the golfing circus came to Turnberry in 1986 they found the most perfectly manicured course in recent Open history, probably the best-ever in fact. The rough, however, was ferocious and far too many players, it seemed to me, were at least three down as they stood on the first tee.” 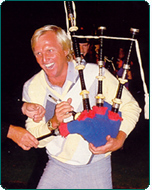 The second day’s weather was slightly better. Greg Norman, near the head of the pack with a 74 after day one, was much better. He tied the record for the lowest round in an Open Championship with a blistering 63 and a two-stroke lead overall. (The mark had been set by Mark Hayes in his second round at Turnberry in 1977.)

Though his lead fell to one stoke after the third round, Norman never relinquished it, and waltzed to a five-shot victory on Sunday for his first major.

In 1994 another down-to-the-wire match was played in mostly fine weather, and after two rounds the leader was none other than Watson. But he faltered in the final round, which began with about a dozen players still in the hunt. 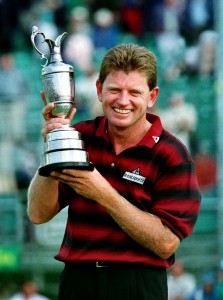 Nick Price with the Claret Jug

As the day developed, the Championship looked to be heading Jesper Parnevik’s way. He arrived at the final hole with a three-stroke lead, but left with a two-stroke margin after a bogey.

By then, only Nick Price had managed to stay within sight of Parnevik (literally, in the group behind). Price birdied the sixteenth, and then managed to reach the par-5 seventeenth in two, although forty to fifty feet away, facing a downhill, curling putt. It dropped for an improbable eagle, Price made a wild leap into the air, and when he landed he had a one-stroke lead. A par at the last put the claret jug into his hands.

Price matched Watson’s 1977 score of 268, although Norman had set a new record for low aggregate the year before at Royal St. George’s, 267.

Turnberry’s turn in the Open rota was put into abeyance after the 1994 Championship until the roads to the resort could be improved upon, and that’s been done with the construction of the M77.

Having warmed up some in recent years with the 2002 Women’s British Open (won by Karrie Webb) and some Senior British Open championships (Watson won in 2003 for some nice symmetry, and Loren Roberts in 2006), the stage is as well set for 2009 as it is for tomorrow’s opening tilt of the Ailsa Cup Match.