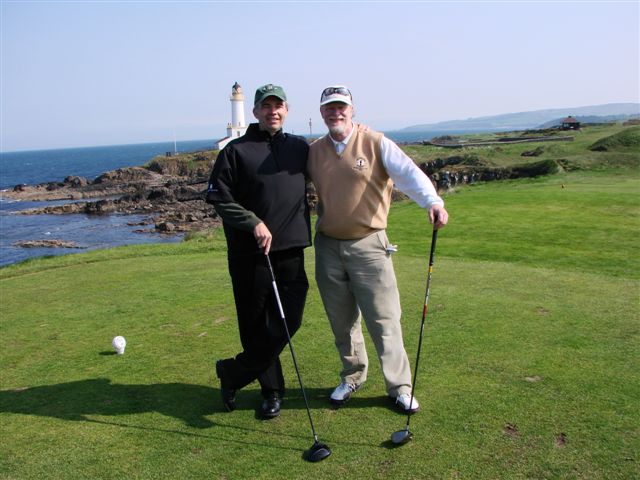 The first round of the Ailsa Cup matches, over the eponymous course, ended in a two-two split–no blood. Team captain Tom Mackin (left) and I fought well in our match against Alistair Nicol and Jonathan Ashworth, but faltered on the last two holes to lose two down.

It was difficult to get too upset about this, since we were, after all, playing the Ailsa course. This was the second course I ever played in Scotland–the first being a jet lag round at Royal Troon back in 2004.

By the time I worked around a mild dogleg left at the fourth hole at the Ailsa course, aiming at a green nestled seemingly on its own planet–a world of wild grasses waving serenely in a briny seaside breeze, all sound muted, the distant target beckoning seductively, almost illuminated–I was a hostage to its charms.

And that was before I came to the money holes, the eighth and ninth that run right along the sea in full view (when it’s in view) of the Ailsa Craig, a rocky shoreline, the totemic lighthouse, and the ruins of Bruce’s Castle, as in Robert the Bruce, Scottish King from 1306-1329. 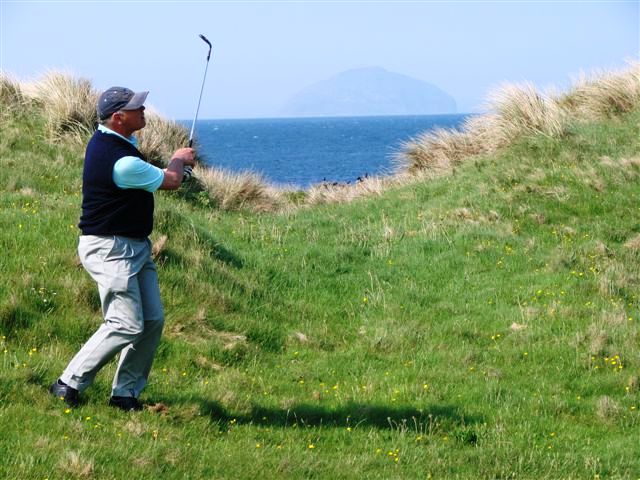 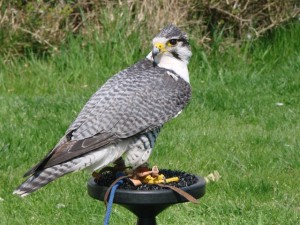 We played the more sensible medal tees at 6,493 yards, but after hiking miles a day for four days, the old bones appreciated being worked over in a massage at the Spa at Turnberry, just one of the many amenities that draw visitors here. For the relentless golfer there is a practice green right in front of the hotel, and further down at its base an 18-hole pitch and putt course.

The non-golfer need merely head to the Outdoor Activity Centre to set up salmon or trout fishing, horse-riding on the beach, off-roading by 4×4 or bike, archery, falconry, clay target shooting or hill walking. 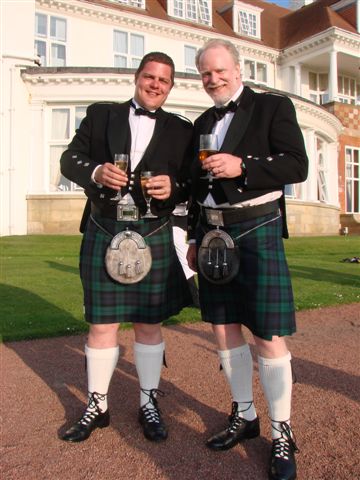 Jonathan Ashworth (left) and I at our kilted best

The massage may have put me into too relaxed a mood prior to grappling with the dress code for the night’s gala Scottish Dinner—full kilts for both teams. Luckily, we were given an instruction sheet: “The easiest order in which to dress, is to start with your socks…” and taking us right through the right way to hang the sporran, where to slip the sgian dubh, how to lace the ghillie brogues.

What the instruction sheet made no mention of was the under-the-kilt question, which naturally, well, arose frequently. The two kilted bellmen I had spoken to in the hotel lobby were of somewhat different minds, one saying it was largely left to “personal choice,” the other suggesting that there was simply no debate, and that one was duty bound to go commando.

I felt duty bound to wear the Black Watch tartan to honor my Campbell heritage, and I cut a fine Celtic figure if I do say. The night fairly dripped with plaid, as a bagpiper led a procession into our dining room for Burns’ “Address to the Haggis”:

Fair fa’ your honest, sonsie face,/Great Chieftan o’ the Puddin-race! as recited by Drew Cochrane, an editor at the local Largs & Millport Weekly News by day, but a rousing Burnsian in the evening parlor. Cochrane reappeared toward the end of the meal for a full-tilt recitation of “Tam o’ Shanter,” albeit seasoned with a few anachronistic jokes.

Our jokes were growing more rancid by the minute, more than one about fondling our sporrans, so a full-blown bagpiping band marched up to the front of the hotel in timely fashion, to Beat the Retreat. The band played the tunes of glory with enough fervor to cause one Scotsman to remark, “That would bring a tear to a glass eye.”

There were numerous glasses being passed around at our dinner, to be sure, so that Scotsman Kevin Ferrie asked the pertinent question: “Does the Academy actually have a ‘Golf With a Hangover’ program?” 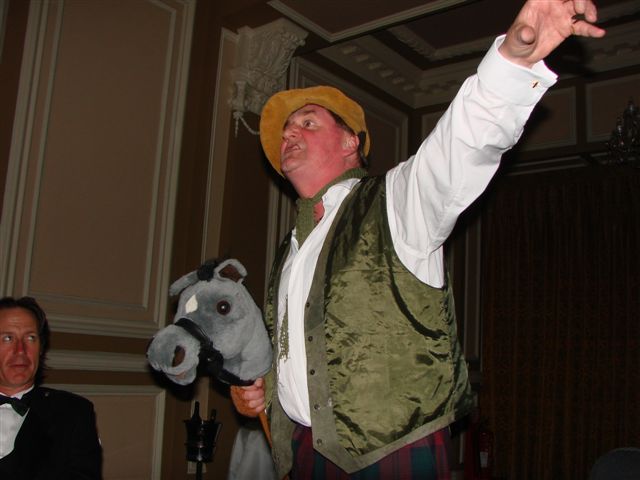