The headline for my piece about the 2012 U.S. Women’s Open, These Women Are Hot, was presented with tongue firmly in cheek, riffing on the expected (and delivered) broiling temperatures for the first two rounds at Kohler, Wisconsin last week.

No kidding this time, though, as Norwegian LPGA star Suzann Pettersen has shed her collared shirt, hat and everything else for the new ESPN The Body Issue, soon to hit the stands. (Details here.) 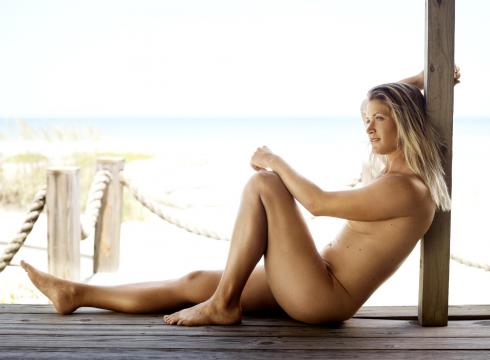 Jeff Lipsky snagged this image for ESPN, in a photo shoot in Cocoa Beach, Florida said to last for five hours. Time well spent, it appears.

Pettersen, who was the leader at the halfway mark at the Open after a second round four-under 68, finished in a tie for ninth place.  She’s ranked sixth in the world at the moment, is an eight-time winner on tour (the Safeway Classic and Sybase Match Play Championship last year).

She joins LPGA comrades Sandra Gal, Belen Mozo, Christina Kim and Anna Grzebien in uninhibited behavior, all past posers for the ESPN The Body Issue cameras. PGA Tour player Camilo Villegas also took it all off for a past issue.

What’s to say? Nice to see a tour player go logo-less for a change.

One Response to “Suzann Pettersen Is Really Hot”