[June 16, 2022]–On the Wednesday practice day at Brookline’s The Country Club I easily surpassed walking the 7,254-yard setup for the 122nd rendition of the U.S. Open, now underway today. I walked all 18, with its numerous roped-off detours, clocking a robust 23,363 steps according to my Fitbit, or just shy of 11 miles.

The home hole at The Country Club

It was my first time seeing the classic course, and I have to say it looked intimidating, particularly the fearsome bunkers surrounding the mostly small greens. It should be an admirable test, as it was here in 1913, when Francis Ouimet shocked the golf world in winning the Open over Henry Vardon and Ted Ray, or 1988, when Curtis Strange outlasted Nick Faldo in an 18-hole playoff.

The balls and scorecards used in those Opens were on display in the media room on Wednesday, as was Strange himself, who flew up from his home in North Carolina to talk about his victory in the last U.S. Open to be held at The Country Club. 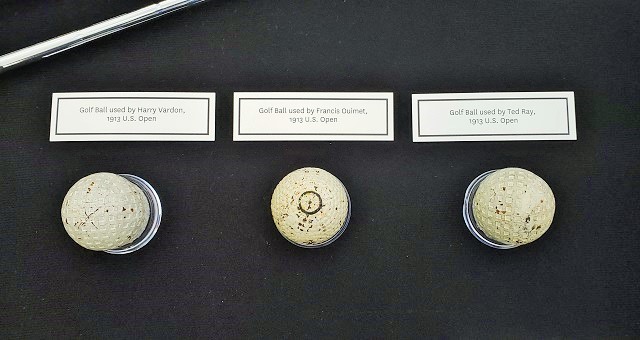 Strange knew he would be asked about the elephant in the room, the intrusion of the Saudi-backed LIV Golf Series that has been castigated by many as “sportswashing,” a blatant attempt to distract from the Saudis’ human rights violations. It was a subject that couldn’t be avoided around the course all day, although that’s what U.S. Open officials mostly tried to do in a press conference on Wednesday.

United States Golf Association CEO Mike Whan did intimate that future participants in the LIV league “might” be barred from future Opens, but that this year’s qualifiers were already cleared to play. (Seventeen LIV participants have been suspended by the PGA Tour, but the Tour does not administer the Open.) 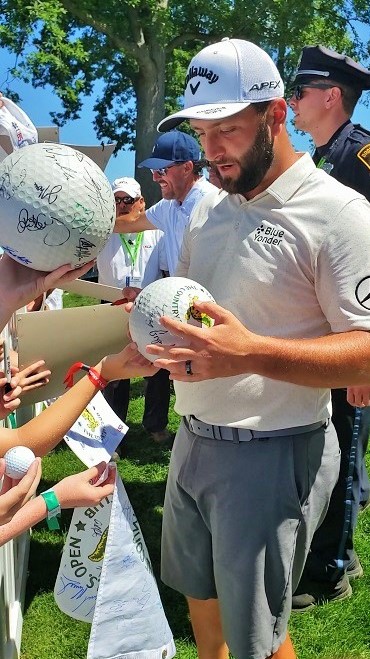 That includes, perhaps most notably, Phil Mickelson, who curiously enough played a practice round yesterday with the defending U.S. Open champion, Jon Rahm. Rahm, along with Rory McIlroy, have been the most outspoken top players castigating the Saudi league in support of the PGA Tour.

Indeed, Strange said he’d been thinking about the question he knew he’d be asked all during his flight north, and he finally conceded that he couldn’t really add anything to what Rahm and McIlroy had already said; he was in complete agreement with them.

I caught up with Mickelson and Rahm near the twelfth green, where both were practicing flop shots from the left rough. One can’t help but wonder what the chatter was during that round. As for the flop shots, Mickelson appeared to have them more under control than Rahm.

After their round Rahm signed autographs onto TCC hats, flags, oversized foam golf balls and actual golf balls for well over an hour. Mickelson was soon right behind him, doing the same. Mickelson will be teeing off today on his 52nd birthday, seeking the one major title that has teasingly alluded him in his career. Success seems unlikely.

What his future holds is clouded at best, as the world of professional golf teeters on some kind of tipping point. But for the next four days at least, it will still come down to the last man standing. No one repeated Strange’s feat of winning consecutive U.S. Opens in 1988 and 1989 until Brooks Koepka in 2017-2018. Ben Hogan preceded them in 1950 and 1951.

Strange conceded that it’s hard to predict what a winning score might be at TCC’s par-70 routing, but he thought -5 or -6 might do it. As I write this, Rahm has just finished his opening round at one-under. A good start. 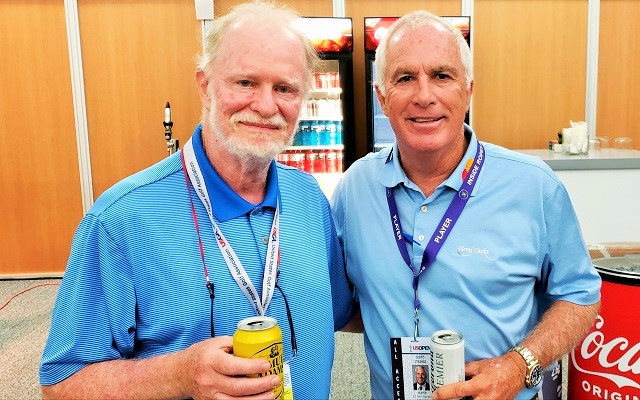 The author enjoys a beer with Curtis Strange