For no premeditated reason, recent travels have included a half-dozen stops at Pete Dye-designed courses, beginning with TPC Sawgrass. Next up was Pound Ridge Golf Club, his only project in New York State, then a Dye-a-thon on all four courses at The American Club, in Kohler, Wisconsin.

Dye’s work at The Ocean Course at Kiawah Island Golf Resort – notorious for its difficulty – promises to be one of the co-stars of this week’s PGA Championship. So it seems a logical time to consider his oeuvre in a more general way. 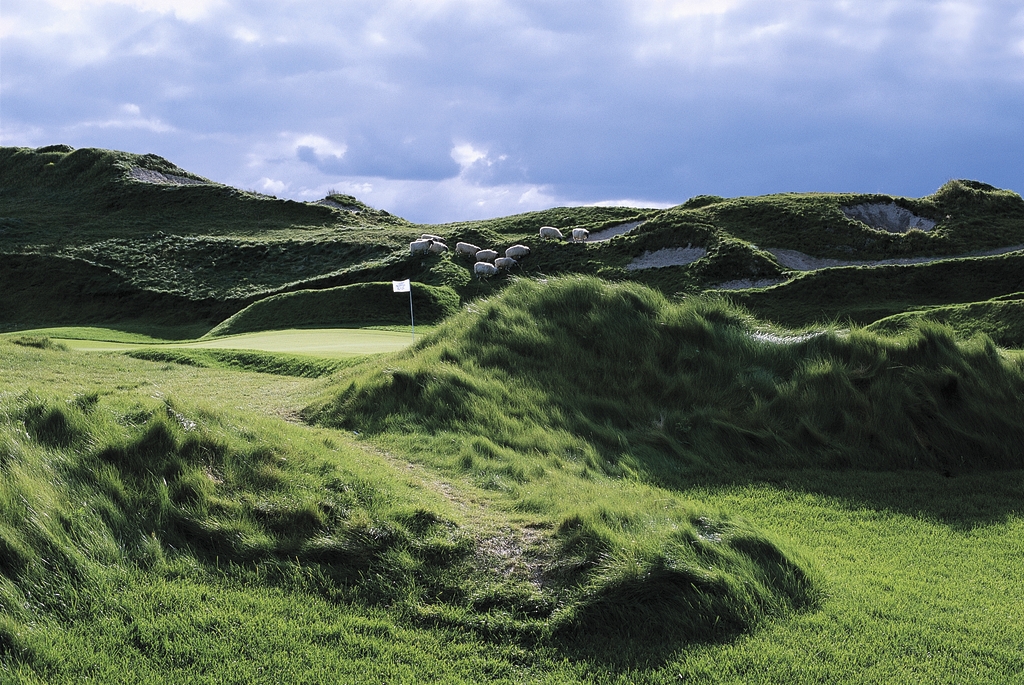 The 11th green at The Irish Course, Whistling Straits, The American Club, in Kohler, Wisconsin.

Expert critical analysis, like the rankings, will be left to the experts. Regardless of one’s like or dislike for Dye’s esthetic, however, it seems fair to say that it’s not currently in vogue. Economies related to stagnant participation levels, concerns about resource allocation and other material quandaries all favor minimalism and playability, reduced maintenance, less is more.

As a marketing bonus, we’re able to link this scaling back with a return to Golden Age of Golf Architecture sensibilities, not to mention earth-moving capacities.

Among the more antic platitudes bandied about when the talk turns to course design is the old saw about “listening to the land.” In addition to having found Dye charming during my occasional media contact with him, I had always liked the idea that he’d rather throw Mother Nature into the turnbuckle than listen to the land.

He claims this isn’t true, that he builds courses rather than designing them; and that the course that gets built has everything to do with the topography.

Yes and no. Take the two tracks at Whistling Straits, the Straits Course and The Irish Course, in Kohler. Both required copious, massive soil displacement to simulate the firm, fast, dunes-lined moguls of linksland courses in the British Isles. But while the holes here “fit” the context, surely this has as much to do with Dye’s imagination as the pre-existing Wisconsin farm landforms.

If this sounds contrary to current design jargon, the approach has its advantages, which Dye uncannily leverages. Even the cart and walking paths are interwoven inconspicuously, so as not to compromise visual appeal. (The Straits Course is walking only, but the roughly paved paths are designed – or built – to resemble the deer paths found on courses in Great Britain and Ireland. The Irish Course allows motorized carts but they’re confined to the path, again concealed.)

He’s a master of angles, so rather than being constrained by existing contours, his routings are circumscribed by strategic challenge – mesmerizing and daunting all at once. Landing areas appear half their actual size and players are taunted to hit balls where they shouldn’t.

If it sounds really tough and really expensive, it is. The pros were vociferous in their condemnation of The Ocean Course when it debuted in 1991, so it ought to be interesting to hear their assessment this time around.

For my part, a vivid recollection of The Irish Course is gazing up the steeply elevated fairway of the 10th hole, thunderheads in the distance and sheep – imported from the UK, we were told – in the foreground. Shaking off a flashback to the Glasheedy Links at Ballyliffin in northwest Ireland, I marveled at the ingenuity.

Is it over-engineered? What about the fairways at The Ocean Course, padded to provide sight lines to the Atlantic? Such colossal undertakings may no longer be fashionable, but some guy who insists on building a world-class tournament course from scratch will always come along.

Besides, Dye might point out, these layouts are conceived and built to be sui generis – for most of us, an occasional treat, not the proverbial course you could play every day, or would want to.