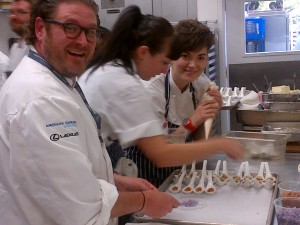 Celebrity chef Todd English had a luxury tent full of food-o-files eating out of his hand during an intimate cooking demonstration, followed by a book signing, at the annual Pebble Beach Food + Wine event. “I love nothing more than preparing a meal for someone. It’s so sensual,” said English, as he whipped up a plate of colorful ginger roasted duck complimented by parmesan risotto with peas and carrots, using unabashed amounts of butter and salt below a giant, tilted, mirror displaying the Michigan-based Jenn-Air stoves. “We eat with our eyes first. The plate is your canvas. Cooking is the only art form that reaches all five senses.”

Just across the hall, master chef Jacques Pepin, who cooked for three French presidents, was putting on a similar show, and eschewing measuring cups to rely on his five decades of culinary experience. His daughter Claudine, acting as both sous-chef and sidekick, swigged champagne in response to her father’s comic eccentricities and rumbling French accent. 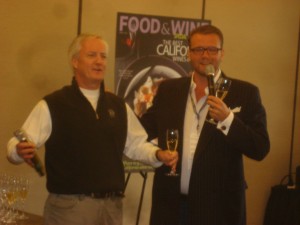 Thanks to the vision of founder David Bernahl and his partner Robert Weakly, in partnership with Food + Wine Magazine, 75 celebrity chefs appeared for four days around Pebble Beach Resorts, headquartered at the oceanfront Inn at Spanish Bay. I touched base with Food Network Iron Chef Michael Symon at the opening night tasting to ask him how his Detroit restaurant, “Roast,” was doing. “Great,” he said in his apron. “We’ve been open three years now in Detroit and experienced 30-percent growth each year.” 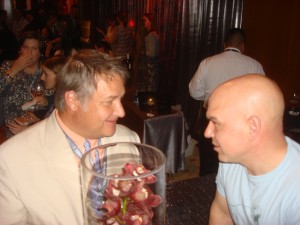 The mingling continued between sips from over 250 wineries including Silver Oak, Caymus, and the Chateau’s Lafitte and Rothschild. Sharing a swing or a taste with foodie heroes Daniel Boulud, Anne Burrell, Michael Chiarello, and even “Diners, Drive-In’s and Dive’s” host Guy Fieri was par for the course at Pebble Beach. For instance, in small talk on the golf course during the Celebrity Chef and Winemaker Tournament, Andre Bienvenu, executive chef at Joe’s Stone Crab, explained to me the historic Miami Beach restaurant actually owns a fleet of 42 boats to harvest the crab claws. 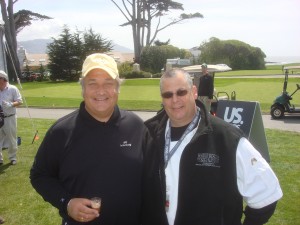 During an impossibly exquisite Grand Finale dinner overlooking Stillwater Cove and Pebble Beach’s iconic lone cypress, chef Tyler Florence, of the show “How to Boil Water” (an Oprah Winfrey favorite), prepared oyster stew and Santa Barbara sea urchin. The rest of the evening’s courses, also prepared by celebrity chefs, were accompanied by varying vintages of Dom Perignon, highlighted by OEnoth’eque, 1970. I dined and sipped alongside Toyota CEO Jim Lentz, whose Lexus division sponsored the afternoon’s expansive Grand Tasting event. Oenologist Vincent Chaperon took to the stage to describe each pouring with the same enthusiasm as Benedictine monk Dom Pierre Perginon, who, upon discovering champagne in 1688 exclaimed, “Come quickly. I am tasting stars!”

Book quickly to meet stars, though! Varying ticket and lodging packages for April 4-7, 2013, will be in high demand when they are revealed at PebbleBeachFoodAndWine.com.

Michigan based travel writer Michael Patrick Shiels may be contacted atInviteYourself@aol.com or via www.TravelTattler.com