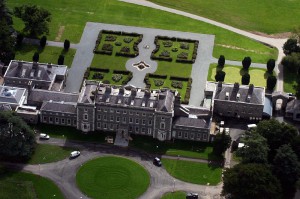 Carton House, at 835-years old, is now a premier resort hotel and spa near Dublin.

A homecoming was held this week at the 2013 Irish Open Golf Championship contested at Carton House, a stylish hotel and spa 14 miles west of Dublin’s city center. The subtle, 835-year old hotel building would be a tourist attraction even if it were not a resort – it’s one of Ireland’s most stately homes, having housed royalty and been used in Hollywood films.

The cameras, though, were pointed at the likes of superstar Irish golfers Rory McIlroy, Darren Clarke, Graeme McDowell and Padraig Harrington, who came home to compete on one of two 18-hole tracks at Carton House. How important is it for the world-renowned champions – five major titles between them – to come home in terms of attracting visitors to Carton House and Ireland in general? The Irish stars could be playing for twice the purse money at the AT&T event Tiger Woods fronts at Congressional Country Club near Washington D.C., but they know live morning coverage of the European Tour in America on The Golf Channel gives the Yanks a chance to dream with their coffee and cleats on…and then make plans to visit.

For those lucky enough to travel to Ireland, Shane Lowry, touring professional for Carton House, said, “Irish golf has never been stronger with four Major Champions in our midst.”

Organizers built a stadium of seats around the 17th green to give the Irish Open a festival feel. “It’s a perfect venue and should be a winner,” said Harrington.

In striking distance from Carton House are renown courses The Island Club, Headford, St. Annes, County Louth, and the highly-touted, seaside European Club, which has hosted the Irish PGA and owned and designed by legendary golf writer Pat Ruddy. “I am fairly sure that I have the best golf course in the world designed, built and paid for by a golf writer. I could be wrong,” Ruddy told me with the charming humor only the Irish can pull off. Ruddy is the type of Irishman visitors hope to meet on the Emerald Isle, and many of them do. He spends most of his days at The European Club, and the players who climb around the 20 links holes he’s created with their jaws dropping, wish they could too.

“There is no questioning the requirement for a thrill or fear factor to waken the latent hunter within every golfer,” writes Ruddy of his design philosophy at the European Club in his book “Fifty Years in a Bunker.” He’s also authored, modestly, “The Perfect Links” about his own club. No one has denied his title is accurate.