Dale Jones caddied for 10 years on the LPGA Tour and remembers the first time he looped one of his players to victory. “East Lansing, Michigan. Walnut Hills Country Club. Oldsmobile Classic. 1995. Dale Eggeling,” he 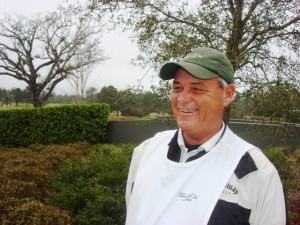 says, in a southern drawl through a big smile. He doesn’t remember how much he was paid for the win, but he does remember the course and the town. “Walnut Hills was always in beautiful condition. The crowds in Lansing were very friendly and very enthusiastic.”

Eggeling won by finishing two strokes ahead of Elaine Crosby, who lives 30 miles away in Jackson and finished tied for second place. Jones was buddies with another caddie, Greg “Tex” Gallup, who caddied on Tour for Mount Pleasant’s Kelly Robbins. They enjoyed the camaraderie and competition that traveling on Tour brought them.

“But I got too old to walk six miles lugging a bag,” says Jones.

So like two war horses taken from the grind of the track to the glory of a stud farm, Jones and Gallup now enjoy caddying, saddled on the power carts of resort guests, at the luxurious Fallen Oak Golf Club in Biloxi, Mississippi. They still banter like Abbott and Costello, delighting vacationers with their humor-enhanced, self-deprecating Tour tales. Jones makes the average Joes he caddies for feel like pros. But the Tom Fazio-designed Fallen Oak, Mississippi’s top-rated resort course, is truly the star of the show. “I just love this layout,” Jones insists.

Biloxi is near Gulfport, on the Gulf between New Orleans and Mobile – an area ravaged by Hurricane Katrina – which pushed the course’s debut back to 2006. “Even having a major storm in the middle of constructing this golf course turned out to be a positive – for instance, the name ‘Fallen Oak,’” said Fazio, an acclaimed architect. “You look out and see that fallen oak on the ground and we built the 18th hole around the tree. It’s in such a natural and logical position it just had to be. I think people will come here and say it’s one of a kind.” The clubhouse bar, with its panoramic, view, is also one of a kind – voted among the top 50 in America. 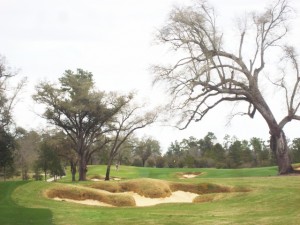 The PGA TOUR’s Mississippi Gulf Resort Classic, for the over 50 legends, is held March 23-25 at Fallen Oak in late March. Past British Open champion and Ryder Cup captain Tom Lehman won the event in 2011 on his first visit to Fallen Oak. “A lot of the guys out here had been telling me that I needed to come and play here and that I’d love the course. I think they were right,” exclaimed Lehman upon winning $240,000.

Guests of the MGM’s waterfront Beau Rivage Hotel have access to Fallen Oak Golf Club, via complimentary limo from the hotel! To visit, see www.FallenOak.com

Travel writer Michael Patrick Shiels may be contacted at InviteYourself@aol.com or via www.TravelTattler.com