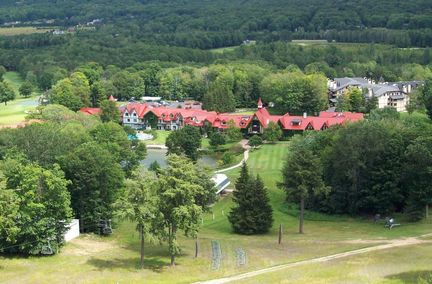 Boyne Highlands Resort is in Harbor Springs…but close to Petoskey, too, where Boyne Mountain Resort is also just down the road.

Two towns that taste like slices of Americana are neighbors in Northern Michigan: Petoskey and Harbor Springs, located on either side of Little Traverse Bay, in the upper Lower Peninsula. The two villages are only four miles apart (and even closer as the crow flies or by boat), making it is easy to visit both in the same day. In a head-to-head rivalry, each boasting shopping, restaurants, hotels, Boyne Resorts and scenery, how does Petoskey and Harbor Springs compare?

Arnold Weinfeld, a native New Yorker living in Lansing, says, “Harbor Springs reminds me of a New England village.” Amy Ray, a sailor from Rochester, agrees. “Harbor Springs has more of a ‘nautical feel’ to it with an established sailing culture. It has more charm, in my opinion.”

The downtown marina is very accessible to boaters and gawkers alike, who can stroll down the docks of the sheltered bay and dine outside at Stafford’s Pier Restaurant. Gary Hutnik, a dentist and writer from Okemos insists, “Harbor Springs is more picturesque with better restaurants, better eye candy, and more of an artist’s sensibility.” Indeed the small commercial district is made up entirely of art galleries and independent mom and pop shops such as Tom’s Mom’s Cookies, Velvet…a Candy Store, Yummies Ice Cream Shop, and Rocking Horse Toy Company.

A scenic bluff overlooks the town and its tiny public beach and harbor. Harbor Sprints has a population of 1,194 some of which live in stately Victorian mansions directly across from the water. A drive to the north along Highway 119 hugs Lake Michigan and takes motorists through the famed Tunnel of Trees, which is especially scenic during the fall colors period.

Sherri Carter Merritt, from Charlotte, explains Harbor Springs is “too stuffy for her” and so she prefers Petoskey, with a population of 5,670. “I always visit Sturgeon River Pottery and love walking the pier, which my nieces and nephews have all dived off of,” she says. “I like to grab a sandwich from the Flat Iron Grill, which is said to be haunted and was frequented by Ernest Hemingway, and eat it in the park.” Hemingway grew up on nearby Walloon Lake, and his first short story was titled “Up in Michigan.”

Debby Mangopoulos, of Mason, says, “I have fun shopping in Petoskey and love the Perry Hotel. The Perry, built in 1899, is in the center of the very walk-able, shop-able downtown on the National Register of Historic Sites.

Lisa Duncanson Fata, of Lansing, says, “Harbor Springs is not as commercialized, but Petoskey is gorgeous, too.” Cary Campbell, of East Lansing, agrees. “Petoskey has parks on the water and more year-round residents, plus more expansive shopping.”

Your best bet is to visit both, with the better sunset over Lake Michigan to the west visible from Petoskey.