A few words of warning! St. Peter’s Basilica, at Vatican City, in Rome, was very near a recent “Travelers’ Choice” list of the “World’s Most Beloved Landmarks” – well ahead of the Eiffel Tower, for instance, which did not crack the top-10. Beware, though, if you’re considering a bucket-list visit to the world’s largest church: the lines to get into the basilica, and the adjacent Sistine Chapel and Vatican Museums reflect the high level of interest and are usually blocks long. ICBellagio.com, though, saves you literally hours of wait time by providing “front of the line” access through their customized Vatican private tours.

Piera, our guide, wearing white, round sunglasses and a smile, met us just outside the Vatican entrance at the arranged time of our choosing: 2:45 in the afternoon since our flight into Rome landed at noon. We’d literally hit the holy ground running since ICBellagio.com’s guide and driver saved us time and confusion by gathering our luggage and sweeping us quickly out of Fiumicino International Airport and to the Hotel Mediterraneo just a block from Rome’s train station. We had time to check in, freshen up, and take in the sweeping view of the Eternal City and Vatican City from the hotel’s rooftop restaurant and patio. 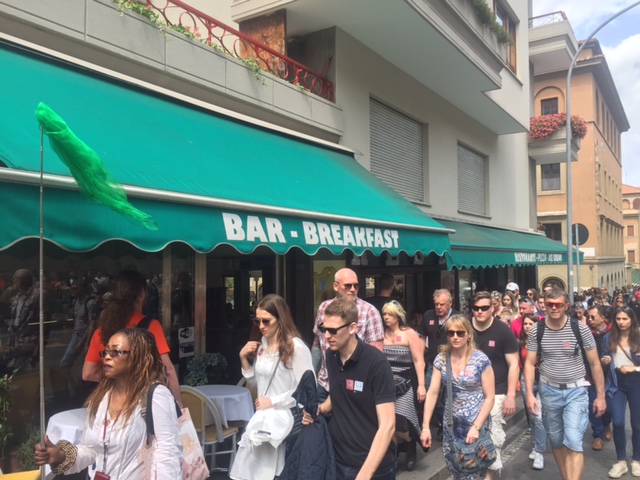 Large groups waiting in long lines outside Ristorante Paolo on their way into the Vatican.

Once Piera (the Italian female name for Peter, ironically) led us inside the Vatican, we realized how blessed we were to have arranged the private tour. Large groups of 20 tourists were trudging through the passageways struggling to hear and keep up with guides toting colored pennants on sticks so they could be seen above the throngs. By contrast, ICBellagio.com’s Piera, guiding just the two of us, asked us, as we made our way through hundreds of years of priceless artwork, “Do you want the short version or the long one?” We opted for the breezier tour and loved the way she customized the tempo of our three-hour visit on the fly by determining our interest and endurance. We even took a break on a bench in the courtyard for conversation. “I have the greatest job imaginable,” said Piera, who displayed a fresh passion for the Vatican glories she’d easily seen hundreds of times.

One other cautionary tale: just outside the entrance to the Vatican Museums across the street from the long lines, you’ll see the appealing sidewalk seating of “Ristorante Paolo,” shaded with green awnings emblazoned with the words “bar-breakfast-pizza-ice cream” and a sign advertising “marghertia pizza for 5.80 Euro.” A sit-and-snack looked and sounded like a good idea to us…until the bill came. Buyer beware: the up-selling began as soon as we sat down, when the waiter steered us away from the margherita pizza in favor of pizza paolo for 12.80. He also charged for water and for the unasked-for bread basket he’d placed on the table.

Though I ordered the Chianti Classico for 7.50, he brought, and charged for, Montepulciano d’Abruzzo Masciarelli, for 12.00, instead. When I pointed this out, he shrugged and asked, “It was good, though, wasn’t it?” (Which was beside the point.) After a12-percent service charge was tacked on the total bill was 46.37 Euro. I didn’t mind, though, during the lunch, tipping the strolling Roman accordion player who sang Italian songs, but be prepared otherwise because Rome is full of aggressive foreigners aggressively selling trinkets.