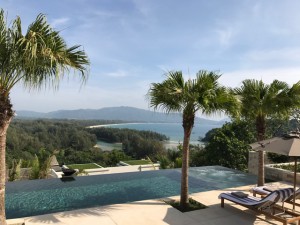 Studies have shown a surprising number of brides and grooms argue on their wedding night. Maybe newlyweds should just fight it out right on their honeymoon? In fact, boxing gloves, a ring and a referee are offered at Anantara Layan Resort and Spa on Thailand’s lush Phuket Island – an idyllic honeymoon getaway.

The word Anantara translates to “without end,” which is ostensibly the idea of marriage – especially in the blissful beginning. But in addition to a wedding chapel, private residences with elaborate infinity pools, sunset views from the beach or balcony over the Andaman Sea, and the usual rose-pedal, romantic amenities offered to cooing lovebirds, Muay Thai Boxing lessons are offered at Anantara Resorts, including its’ Riverside property in Bangkok – an hours’ flight north of Phuket.

Instead of the oils and incense of a couples massage in the spa, imagine lacing on boxing gloves, climbing into an actual ring, and working out passion (or aggression) with punches and kicks instead of kisses and hugs. Undoubtedly, some laughs will follow, since the hour-long session ends up being an aerobic workout that pumps up the adrenaline.

Muay Thai is an ancient art in which the combatants master the skills of the eight limbs, relieving stress and raising fitness levels. Couples don’t actually hit each other, but they do take swings and jabs at the instructor who is wearing pads while prompting punches in patterns and combinations: “right, left, cross, jab, kick, knee, elbow, sweeping kick!” The blocks and blows come high and low.

Ananrata’s Layan Resort’s ring is in an open-air, garden setting but is shaded, as the Anantata Riverside’s rooftop ring. The couples – or any Muay Thai Boxing Student do not get to actually hit each other – which seems like it would make the kissing and making up less exciting – but they do take swipes at the instructor, who wears and holds pads and is very skilled.

In order to avoid a “split decision” (so to speak), couples, or groups of couples, can then retreat to the beach, spa, or the resorts infinity pools – the most inspiring of which comes with each of the Anantara’s “Residences,” private, butler-serviced, open-air lodging with multiple bedrooms, living room, and kitchen/dining room independent of each other but linked by open-air breezeways and a swimming pool courtyard with a gazebo and a sweeping view of the sea below.

Anantara’s other outstanding “bonding experience” for couples is “Spice Spoons,” an afternoon cooking class – after a guided visit to the local market with the chef – to cut, craft and cook your own personal lunch – in La Sala, the resort’s Thai restaurant – again in a lovely, open-air, scenic setting.