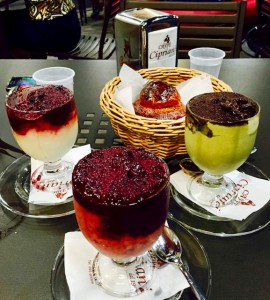 Bishop Raica tempted me with this image of granita and brioche in Acireale, Sicily. (Photo by Bishop Steven Raica)

If you hear someone speaking Italian in Northern Michigan, chances are it is Steven Raica, the Michigan State University alumnus who went on to become Roman Catholic Bishop of the Gaylord Diocese. The amiable Upper Peninsula native had been designated monsignor in the Lansing Diocese but spent years working at the church’s Vatican City-State headquarters and visits Rome often, as evidenced by his Facebook photos.

I posted some artistic pictures while touring the prestigious, historical Taormina Musei Casa Cuseni, in Sicily. Soon after I received a Facebook message from Bishop Raica:

“Ciao, MPS. Enjoy your trip to Sicily a little more by having a granita with brioche. This photo was when I when I was in Acireale a few years ago.” He’d attached an image of the sorbet-like, candy-colored treat in a glass goblet with a spoon next to a basket beside a golden brown pastry on an outdoor café table.

I was touched the bishop would notice my posts and then take the time to write me, so I looked closely at the logo on the napkin dispenser in the photo he’d sent. It emblazoned with the words “Caffe Cipriani.”

I decided I’d try to honor the bishop’s social media thoughtfulness by taking his advice very specifically. I’d been following, very happily and studiously, a magnificent custom itinerary arranged for me by I.C.Bellagio.com, the renowned international tour company specializing in authentic Italian experiences. So I paged through the extra detailed notes their travel advisors worked up for me, which sure enough read: We suggest a stop in Acireale, a baroque gem nestled among the citrus groves and renowned for its opulent 17th century Duomo.

Like a cultured clue hunt, I found Caffe Cipriani, sat under the awning, and ordered the granita with brioche. I positioned the items on the table, complete with the napkin holder, so they matched the image Bishop Raica sent me. I then snapped a picture and messaged it him.

Despite the time difference, Raica seemed delighted and messaged back to me a video of him celebrating Mass there three years earlier in the same Duomo there in Acireale recommended by I.C. Bellagio…which, of course, I then walked over and toured before returning to Taormina. 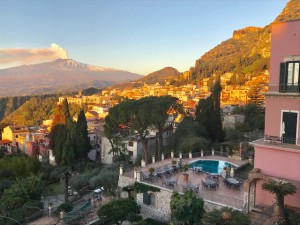 I.C. Bellagio had recommended I stay at the Belmond Grand Hotel Timeo, a glamorous city center spot built onto the Tauro mountainside overlooking the strait of Messina separating Sicily from mainland Italy’s Calabria. As I approached the front desk it would have been impossible for me to take my eyes off the panoramic view out the all of windows were it not for the presence of guest relations manager Manuela Compagnino, who greeted me by surprise. 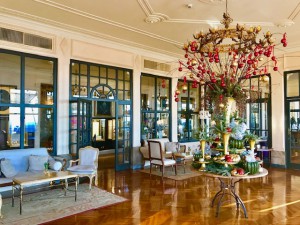 “Buona sera, Signore Shiels. I understand you like to be spoken to in Italian?” 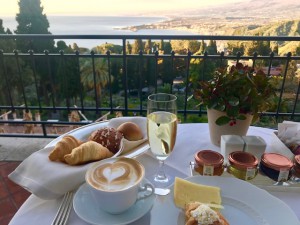 Startled, I warbled back with, “Si. Grazie, bella donna. Va bene,” I was amazed at the famed hotel’s apparent attention to detail. (I’d only moments earlier been practicing my woeful Italian language skills out front of the hotel with Davide Ciampa, the friendly concierge.) 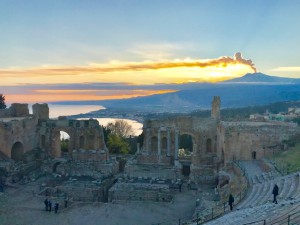 My sunset at treat at the Ancient Greek theater next to the Belmond Grand Timeo. (Photo by Michael Patrick Shiels)

Compagnino then suggested I visit the ancient Teatro Greco next to the hotel, but first added yet another extra detail. “I advise you wait a bit though and go just before sunset. Trust me. You will see what I mean,” she insisted.

I followed her local knowledge, just as I had trusted I.C. Bellagio and the advice of the bishop, and found myself, having passed through a small grove of huge lemons, sitting on the stone rim looking down into the ruins of the third century B.C. amphitheater. I looked through the air and light between its Corinthian columns above a skyline that swallowed setting sun from a pink and orange sky crossed by a white trail of steam gently spewing from the Mt. Etna volcano. The scene was so rich it seemed you could eat it with a spoon.

Just as I had for the bishop, to show my appreciation, I snapped a photo of the moment and messaged it to Compagnino. She messaged back, “Glad you followed my suggestion! It is an incredible spot – and I see they let you stay quite late. Thanks for sharing!”

Though I was traveling alone, I had plenty of gleeful guides and immediate feedback, thanks to the instantaneous digital postcards technology now allows…even in ancient settings.