It didn’t take long after landing at Palm Springs, California’s unique, outdoor garden airport to realize the desert valley is devoted to, and teeming with, star power. Street signs “on the road,” as Bing Crosby and Bob Hope sang, to the famed La Quinta Resort and Club read like the all-star opening credits of an ensemble cast for a motion picture: Gene Autry Trail, Kirk Douglas Way, Dinah Shore Drive, Frank Sinatra Avenue, plus streets named for past U.S. Presidents Gerald Ford, of Michigan and desert fan Dwight Eisenhower. Speaking of former Commanders in Chief, I spotted Bill Clinton almost immediately upon arrival at La Quinta. Hands in pockets and sporting what surely were designed blue jeans since it’s been reported Clinton earned 72-million dollars in speaking fees the previous year, the 42nd President was casually shooting the twilight breeze in the courtyard near the valet entrance seemingly without a care in the world. Watching out for the President’s cares though, of course, were the Secret Service agents protecting every white hair on his head, but in their loose-fitting linen resort wear, they blended in and even snapped photos for guests who wanted a souvenir photo with a chatty Clinton. It was easy to relax in the setting, with surrounding mountains creating a cooling shade over the big bank of colorful flowers and fountains throughout the low-rise, single-story Spanish-style property, where one is hard-pressed to walk 40 yards without stepping into a swimming pool or Jacuzzi. 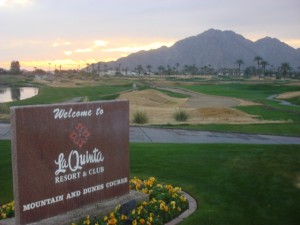 An hour or so later, after a luxurious, $20 straight razor shave and similarly-priced cigar in La Quinta’s Havana Club Lounge, I spotted world famous Australian golfer Greg Norman dining a few tables over in the resort’s lively Adobe Mexican Restaurant. A Mariachi band played near the fire while Norman, himself a winemaker, enjoyed a bottle of Caymus.

Clinton and his playing partner Norman were among the celebrities and golfers in town to compete in the old Bob Hope Desert Classic – now the Humana Challenge – on La Quinta’s scenic mountainside golf courses and the resort-owned, famed courses of PGA WEST, celebrities themselves in that many televised events, including the big money Skins Game, have been staged on them, and they are designed by the likes of star architects Jack Nicklaus, Arnold Palmer, Pete Dye, Tom Weiskopf, and Norman himself. Lee Trevino’s hole-in-one on the PGA West Stadium Course’s 17th hole – a rock encrusted island green – is unforgettable. (I only made par, but it felt like an equal accomplishment.) 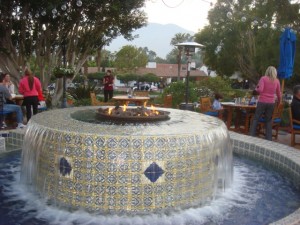 Comfortable sitting areas with open fires abound in the resort

Comfortable sitting areas with open fires abound in the resort

PGA Tour commissioner Tim Finchem was dined across the courtyard in Morgan’s in the Desert, La Quinta’s gourmet restaurant, where Jimmy Schmidt, the Detroit-based chef of Rattlesnake Club fame, who was a media darling before the Food Network, prepared perfect a perfect filet and popcorn-flavored ice cream for dessert.

I asked many of the event’s volunteer drivers for their celebrity chauffer experiences. “Kevin Costner was so mean to his personal assistant that I almost stopped the car and made him get out. She was riding along and he kept calling her a ‘stupid b—-,’” said one driver. “But Eddie Murphy made me laugh so hard I almost had to pull the car over.”

Supermodel Kathy Ireland showed off her legs by wearing a very short skirt while being driven on a shopping trip. “She insisted on sitting in the front seat. Man I was sweating!”

No sweat! You can cool your heels at a La Quinta Resort and Club and PGA WEST are a hot spot in the desert. Visit www.laquintaresort.com 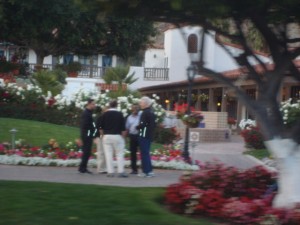 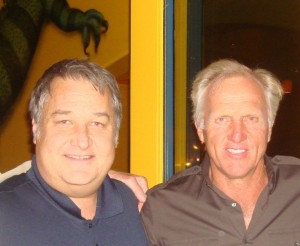