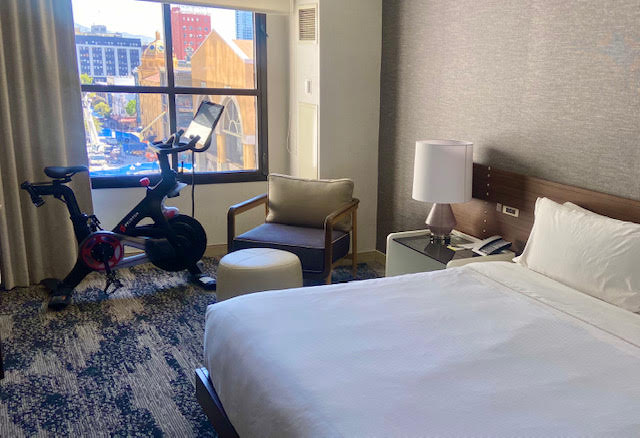 Work up a sweat with a heavenly view in your own room as you soak up San Diego. (Photo by Harrison Shiels)

San Diego is swarming with Midwesterners who’ve decided to move to “America’s Finest City” including James Tate, a native Ohioan who is sales and marketing director at the Westin in Gaslamp Quarter – a hotel that makes visitors feel at home.

Westin’s $17-million-dollar refresh has yielded a new version of their famed “Heavenly Beds,” personal Pelotons in WestinWORKOUT guestrooms, and even high-top tables in the rooms for more versatile work and social situations. Such a table is better for meeting a professional colleague for a glass of wine while looking over a spreadsheet instead of a sitting on a couch…or heaven forbid, the edge of a bed, as tempting as Westin makes them.

“Our Westin ‘Heavenly Bed’ was an industry game-changer when it was introduced and we now offer the 2.0 version with cooling technology for an even better sleep,” Tate told me as we talked in the bright, open Lobby Bar, soon to become the craft-led Bronze Bird Restaurant near the hotel’s on-the-go Ingredients Café. I explained to him that the in-room Peloton bike beckoned me, even for short bursts while taking a call or watching television, as an active alternative to the bed. “Westin wants you to ‘feel well’ the way you want to feel even if it’s from the comfort of your room.”

But the seductive siren song of San Diego’s sunlight, fresh-air and it’s revered, 70-degree, year-round climate calls, so the hotel will lend you gear, including bikes for the bayside path, and also arranges for kayaks and harbor tours so you can move, play, work, feel eat and sleep well. The Westin’s Gaslamp Quarter location means you can walk to the bay, Balboa Park, and the convention center and yet be only 2.5 miles from the airport.
“When you fly into San Diego you drop right down into a skyline full of energy and see beautiful water and palm trees. Gaslamp Quarter has lots of outdoor dining, bars and clubs,” said Tate, “and there is a lot of diversity in the different neighborhoods: Little Italy; Barrio Logan’s arts district; Tijuana, Mexico is reachable by trolley; and just over the bay bridge Coronado Island has a lot of history.”
Coronado Island is the chosen home headquarters of Travelworld International Group, a Virtuoso-accredited, custom, luxury travel design company founded by Francis Contreras and operated, with her worldly, next-generation professional offspring Fabian Lebrija and Tania Lebrija Swasbrook (who founded her own Vgari Lifestyle). Travelworld International and Vgari love Coronado so much they’ve chosen to send worldwide clients on dream vacations as far away as the stars via Virgin Galactic from right there on the Pacific. They’re “kind of a big deal,” and Spartan fans will recall the big deal basketball game Michigan State played in 2011, with President Barack Obama courtside, blocks away on the deck of the USS Carl Vinson aircraft carrier docked at Coronado – where the Navy Seals train.

Yet another of Michigan’s favorite sons, Dick Enberg, moved to San Diego and, after his network sportscasting career, stayed home and called the Padre baseball games on television. The Detroit Tigers beat the Padres in the 1984 World Series. Enberg also called a number of Wolverine Rose Bowls on NBC, but it was in San Diego’s 1984 Holiday Bowl that BYU beat Michigan to win the national title. Enberg wasn’t the only Michigan broadcaster to relocate to San Diego: the morning radio team of “Jeff & Jer” went west from Detroit in 1987 and made it all the way to the National Radio Hall of Fame. “Those guys are legends here in San Diego,” said Tate. “Personalities like that help shape the city. It’s a warm, inviting place and we have a sunny disposition.”

Tate resisted describing San Diego as “classy,” as Will Ferrell’s Ron Burgundy on-air character did in the hit movie “Anchorman.” The pompous Burgundy also referred to himself as “kind of a big deal.” “Everyone in San Diego loves that movie and people still quote it.”

Contact Michael Patrick Shiels atMShiels@aol.com His radio program may be found at MiBigShow.com or weekday mornings from 9-noon on WJIM AM 1240