The lights and bells and whistles of the Windy City of Chicago beckon Michiganders during the holiday season. If only a sleigh ride across Lake Michigan were possible the picture would be perfect – but it’s trains, planes and automobiles that have us frequenting the festive, if familiar, setting.

Recently the National Radio Hall of Fame, located in the Museum of Broadcast History at 360 N. State St, welcomed, at a glamorous induction gala, two more radio hosts with a Michigan connection for enshrinement: “Jeff and Jer,” who were known as the bright, comedy team of “St. James and Elliott” on “Magic 95” WMJC FM in Detroit in the mid-1980’s. Previous Michigan inductees include J.P. McCarthy (the first ever local radio talent enshrined); funnyman Dick Purtan; Tiger baseball announcer Ernie Harwell; and Paul W. Smith, each of whom, including Jeff and Jer, I have worked with in some capacity.

You can view each of their displays and hear snippets of their programs when experiencing the National Radio Hall of Fame which includes every great past and present radio host worthy and imaginable, or even visit virtually at www.RadioHoF.org 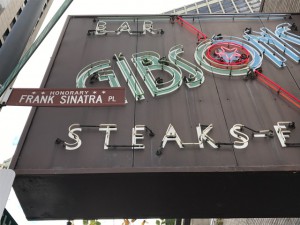 Gibson’s in Chicago, on Frank Sinatra Ave., is a celebrity hangout for stars of journalism, radio, TV, movies and sports.

We celebrated the induction at Gibson’s Bar and Steakhouse, at 1028 N. Rush St., which has a “hall of fame” of its’ own – hundreds of framed photos of celebrities and notables who have dined on Gibson’s custom USDA certified Angus beef at the warm, supper-club style chophouse since 1989. In fact Gibson’s best-selling steak, a 22-ounce prime bone-in ribeye – “W.R.’s Chicago Cut” – was named for a celebrity: author and food critic William Rice, who passed away earlier this year. Chicago-based author Connor Cuneen, originally from Dublin, dropped by during lunch and remarked, with the authenticity and expertise only an Irishman could deliver, that Gibson’s twice-baked potato was supple enough for a fork to fall through but substantial enough to serve four! As is Gibson’s new shrimp cocktail featuring colossal, four-bite “U-8” shrimp. (meaning no more than eight shrimp to a pound.)

Gibson’s, Chicago’s top-grossing independent restaurant, is the cool, timeless sort of place soothing that still sells cigars and where you can see young executives through the large street-side windows washing down lunch at the mahogany bar with a martini. Arrive early to enjoy the big city atmosphere. Greg Horan, the director of operations, smiled when I asked if the airplanes and toy trucks placed above the bar are in homage to those at Manhattan’s similarly swank “21 Club.” “Customers like to give them to us they and like seeing them up there. We do, too,” he said.

The best news is yet another Chicago-Michigan connection: Gibson’s executive chef Kevin Smith studied at MichiganState University and is from the Lansing area. Be sure to ask for him when you stop in!