I asked Dan DeVos, one of the four children of the late Amway founder Richard DeVos, how he ended up getting the coolest jobs in the portfolio of his famously philanthropic, Grand Rapids-based family: sports and cars! In addition to other business responsibilities DeVos, 61, serves as chairman of the NBA’s Orlando Magic; is a limited partner of the Chicago Cubs; is CEO of the Grand Rapids Griffins; and owns 52 Fox Motor Group car dealerships – including a Harley Davidson store. 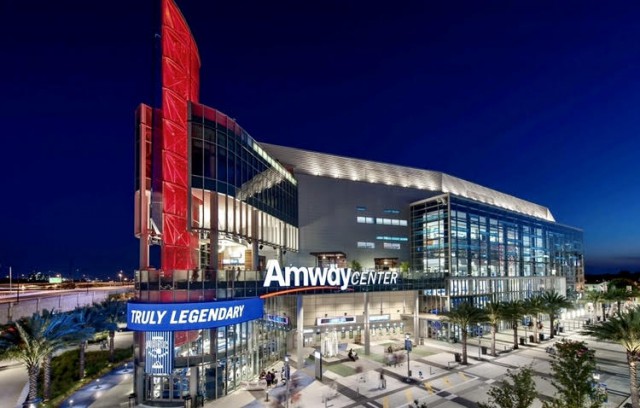 “I guess I was the one available at the time so it seemed to work out that way. Everybody else had a lot of other things going on so it was the right thing for the family,” said DeVos.

His successful siblings serve in strategic leadership roles throughout the DeVos family international entities including Michigan-based Amway – the corporate name emblazoned on the snazzy Orlando arena in which the Magic play. “The Amway name on the building is a great recognition of what the business is and what it represents to so many people around the world who have dedicated themselves to it and are succeeding,” said DeVos. “We’re very proud of being responsible for the Magic and working with the City of Orlando in various ways to make a difference there, also.”

Thirty years of DeVos family ownership, investment and involvement in Central Florida created a ripple for locals like Nick Beucher who was an intern for the Magic and went on to complete the DeVos Sports Business graduate program at the University of Central Florida. He is now president of the Tavistock Development Company.

“It’s great to see people succeed. We like to help people get the tools they need and use their talent to the best of their ability,” said DeVos, who revealed his father, Rich, who authored five motivational books, gave locker room pep talks to the Magic players. Rich and his wife, Helen, kept an Orlando-area residence and attended games regularly. “My father was unique. He was the one they would really listen to. Now I speak to them on a regular basis.”

DeVos admits that while he can sink the occasional free-throw, he is not much of a basketball player. While the pursuits of his siblings are sailing and flying, Dan DeVos loves to have his foot on the gas. “I’ve always been a sports car guy…a speed fan. My first sports car was Porsche 911 back in the 1970s and I still drive a silver one today,” said DeVos who once went 150 miles-per-hour in a McLaren …safely on a track.

Safely and quickly, Orlando’s Amway Center was one of the first NBA arenas able to welcome a limited number of fans back to the stands, along with 350 hand sanitizers throughout the facility, during the pandemic.

“We’re working with all the guidelines of the NBA, CDC, City of Orlando, and everybody to make sure everybody is safe,” DeVos said. “When fans get inside the game our crew has done a great job on the ‘game experience.’ It’s not like having the usual 18,000 people in there but its still a very exciting thing to watch.”