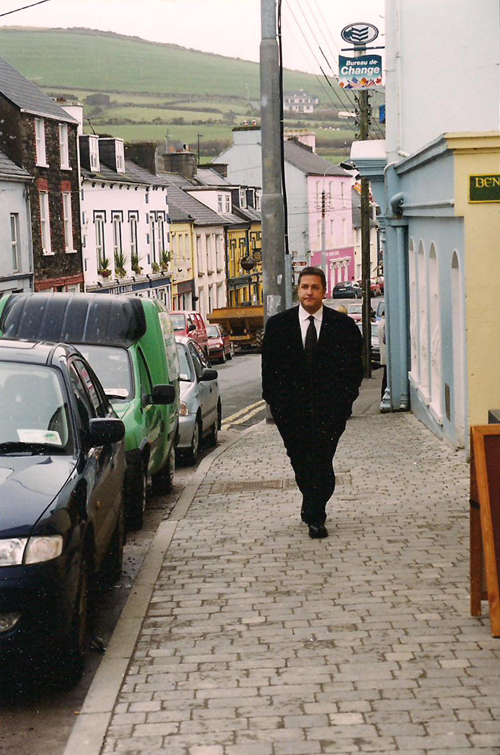 DINGLE, IRELAND- My love affair with Ireland began on a windy, blustery beach in the holiday town of Lahinch, County Clare, 11 years ago. I was taking a good stretch of the legs on the hard strand of sand, breathing the salty, sea air after a seven-hour Aer Lingus flight into nearby Shannon.

I was halted in my tracks by droning sound of a deep, deliberate Irish female voice calling from upwind.

I turned to see the woman, with the blackest of hair and a haunting melody for a voice, beckoning not me, but rather, minding her child. Ireland, though, with its deep mystery, low rhythms, and calming warmth – even in the brisk wind – has been beckoning me ever since. 11 visits later, I find myself back among the green fields and stone walls of the Emerald Isle for another St. Patrick’s Day.

St. Patrick’s Day will be celebrated Tuesday with boisterous merriment in Lansing pubs such as Dublin Square and Claddaugh. All across the Michigan counties named after their Irish counterparts – Antrim, Wexford, Clare and Roscommon, and in downtown Detroit’s Corktown neighborhood – they’ll surely be banging mugs of green beer on table tops. But March 17 in Ireland is a holy day celebrated more like Easter than New Year’s Eve. 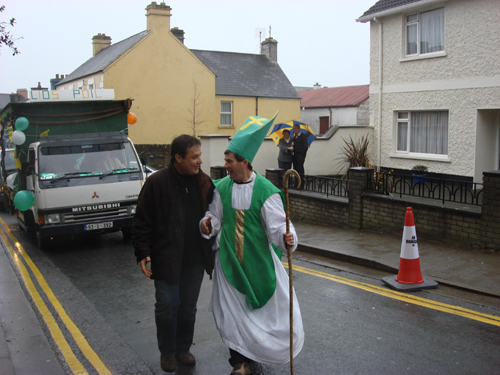 Here in tiny Dingle Town, County Kerry (pop. 1,960) – the westernmost village in the Republic – hundreds of locals, dressed in their finest and clutching a shamrock, flag, or tin whistle, will form a procession by following a drummer through the streets to the century-old St. Mary’s Church for Canon Padraig O’Fiannachta’s 7:00 a.m. Catholic Mass, delivered in Irish. Don’t expect to find a restaurant open for breakfast that morning – everyone retreats home to be with their families before surfacing again for the noon parade. Dingle’s modest, homespun parade nevertheless marches proudly through the town’s narrow, hilly streets and features schoolchildren in green shawls, farm tractors and lorries decorated with crepe paper and signs, and a St. Patrick lookalike making a Santa Claus-like appearance near the end.

To visit Dingle, a sea-smashed fishing port, is to step back in time and experience the still Irish-speaking, picturesque storybook town of postcards and dreams. Southwest of Tralee, (three-hours-drive from Shannon Airport,) a trip over the narrow Conor Pass Road will reveal a breathtaking view of Dingle and the sea far below. Until that point you’ll likely be holding your breath, dodging sheep while driving a tiny, right-hand drive Dooley Rental Car on left side of the narrow, some say lethal lane cut through clouds and rocky mountain outcroppings. The thrill may leave you thirsty for a pint of Guinness upon arrival, and Dingle is especially well-suited for those “fond of the jar” – you can walk from colorful pub to pub and back to your lodging at the quaint yet comfortable, full-service Benner’s Hotel in the center of town, or even out to Robbie and Mary Griffin’s Tower View Inn for a charming, authentic Irish guesthouse experience, complete with lambs, goats, a pony in the back yard, and, of course, their children. 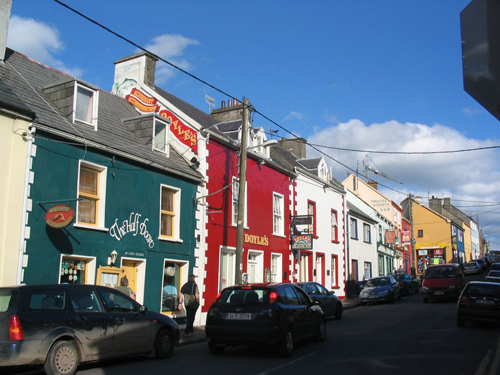 Such is the Irish hospitality that if you order seafood for dinner, they claim they’ll “push the boat out for you.” After dinner at the Half Door or Doyle’s Seafood Tavern (they’re bright green and red storefronts are right next to each other) your pub tour should include Dick Mack’s Pub, across from the church on Green Street. The pub itself is a stubborn antique that retains its’ character through zero maintenance, and occupies a space that first sold dairy products and tea and was a leatherworks and shoe store during the day: a public house after dark. No food or trappings – just whiskey and porter. Try not to be too intimidated when you walk into the hushed room and everyone turns around to see who’s walked in.

At 9:30 p.m. (the locals call it “half-nine”), the town’s locals turn into musicians and singers, circling chairs and performing traditional “sessions” in pubs like the John Benney’s, Marina Inn and the Small Bridge. Their “pay” for an evening’s “work” typically comes in pints!

I’ve been lucky to spend as much as a month at a time in Dingle, an official “Gaeltacht” (Irish-speaking) region.

“Welcome home,” the bartender at Dick Mack’s Pub said quietly as he refused payment, nodded, and slid my Euro coins back at me across the bar – along with my first glass of Jameson Irish Whiskey.

The Irish will welcome you, too, and help you plan your own Emerald Isle adventure at www.DiscoverIreland.com