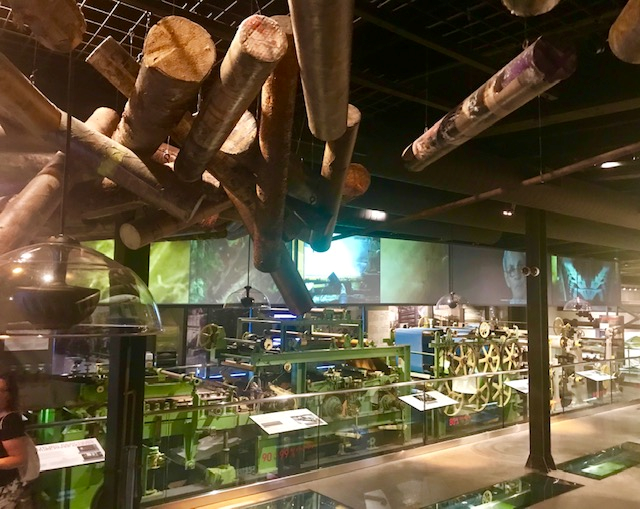 Borealis Museum: Timber in the factory that was the world’s top paper producer. (Photo by Harrison Shiels)

Trois-Rivieres (Three Rivers), Quebec, is now filled with the joie de vivre that comes with being a leafy, French-speaking, waterfront town filled with musical microbreweries like Le Temps d’une Pinte and vegan restaurants such as Café Frida (where “not chicken” and waffles is on the menu) – all within walking distance of the bright, modern Hotel Delta where Julie Pelletier serves a breakfast at Le Brasier in a lyrical French accent and sparkling smile so enthusiastic she makes you feel you’re doing her a favor by enjoying the crepes, croissants and maple butter.

But Trois-Rivieres was a harsh, not happy place in the past, and visitors who hop a Delta flight and then make the 90-minute drive from airports in Montreal or Quebec City can still experience the city’s sinister side in the town’s two most popular attractions.

When you hear the bars slam behind you at The Old Prison your guided tour through the circa-1822 cells and down into the dungeon of doom gets real. The jail was small but its walls thick: three feet of concrete diminished dreams of escape. Death by public hanging seemed the quickest relief given from the humid, human squalor of prisoners who were sometimes caged 18-at-a-time and three bunks-high in washroom-sized cells with a single bucket for a commode (emptied weekly.) The windows for fresh air were sealed when women who’d assembled on the corner below to gawk up into the windows got an x-rated “3-D” show when the prisoners “waved” at them through the bars. Amnesty International intervened against the inhumanity and closed the jail in 1986, but it remains open as a historical site next to the vibrant Musee POP.

The six-month sentences of lumberjacks were self-imposed, but sometimes lethal, as the brave boys and macho men willingly encamped in the crippling cold to load logs from dawn till dusk along the St. Lawrence each year for pay to feed their families. The dangerous work is displayed by tour guide Simon Raby at the very creative Borealis Museum located in the former filtration plant of Canadian International Paper Company – at one time the world’s largest paper mill. “The lumberjacks showered once each week, ate pea soup with beans and pork every single night, and slept very close together for body heat in close quarters riddled with lice, which they put lamp oil in their beards to ward off,” Raby explained. “And still they had to pay for the food and board.” (The lumberjacks could only have dreamed of the comfort and convenience of Hotel Delta.)

Tourism official Josiane Gagnon’s grandfather was a lumberjack named Jean-Paul Emilien. “He was away with all the men for six months each year. So all of the babies in Trois-Rivieres were born in the same month,” she said with a smile.

Borealis presents a Disney-style yet authentic experience with impressive factory equipment, touch-and-feel simulations, a scenic catwalk around a tower over the river, and spooky animated ghosts teaching history in the subterranean cistern.

Festivoix, the city’s annual, weeklong music festival each July is a fine time to visit and can be coupled with both Festival International de Jazz de Montreal and Festival d’ete de Quebec – Canada’s most important music festival – any maybe the world’s most affordable: a $100 badge will get you into all 11 nights worth of simultaneous shows on multiple stages throughout the historic walled city also on the St. Lawrence River.